Antarctica is cold and desolate—and that’s why it’s so appealing to researchers. 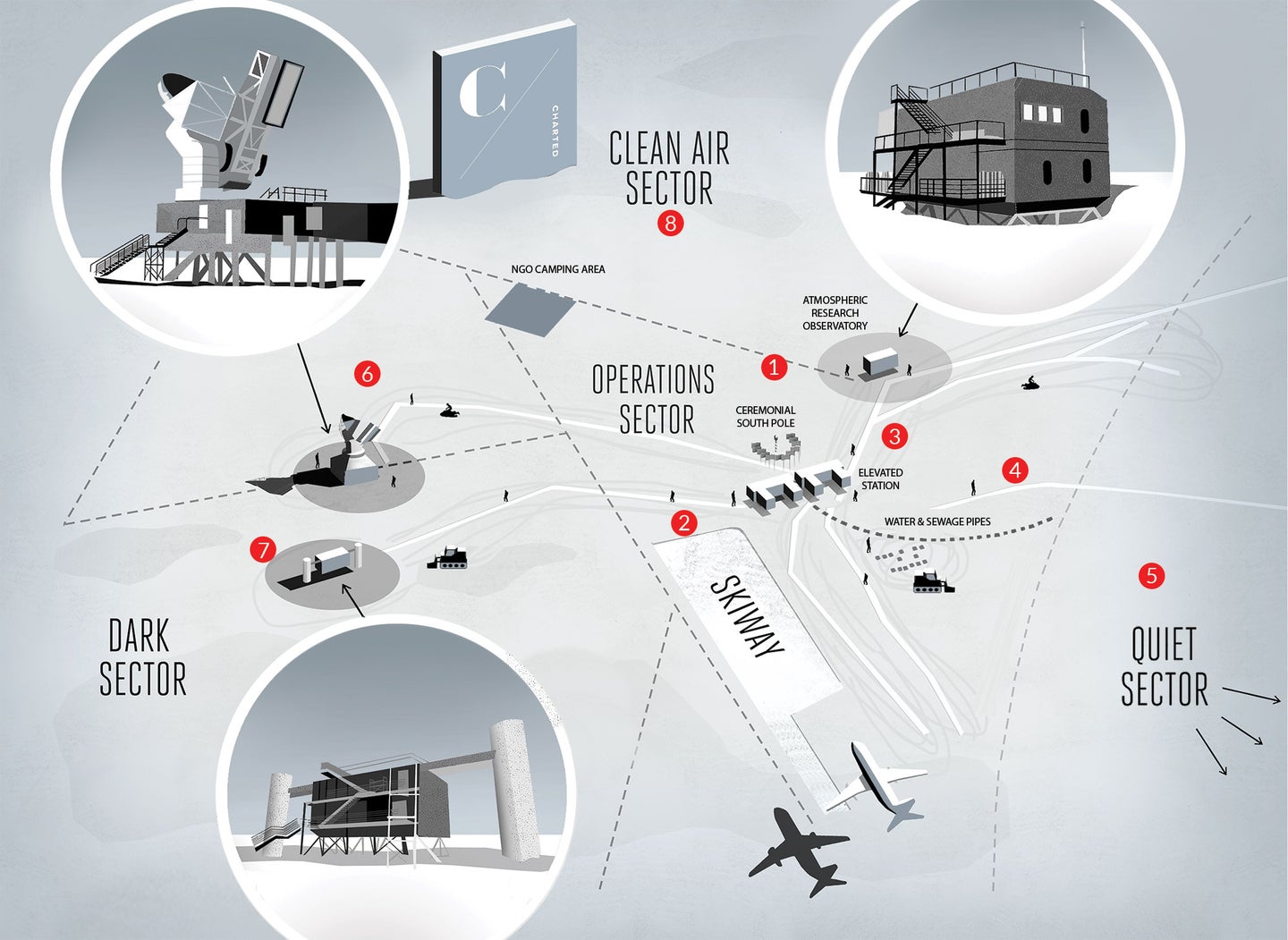 A science lab at the edge of the world. Adam Simpson
SHARE

In 1911, famed Norwegian explorer Roald Amundsen’s team of trekkers became the first humans to reach the South Pole. They stayed for less than a week. But today, one of the most isolated spots on Earth hosts residents year-round. The Amundsen-Scott South Pole Station’s position at the bottom of the globe and ­seclusion from society enables scientists to study seismology, air quality, and even the birth of the universe in ways that are impossible elsewhere. Here’s how they withstand harsh climes to conduct some of the world’s most advanced research.

1. Ceremonial South Pole This spot is more about photo ops than geographical accuracy. It, along with everything else on the East Antarctic Ice Sheet, shifts 33 feet toward the Weddell Sea each year, moving the decorative flagpole farther from Earth’s geographic bottom.

2. Skiway Military planes, equipped with skis and rockets to navigate the ice, transport researchers to and fro during the southern summer. But when temperatures drop and sunlight grows scarce, air ­traffic ceases, leaving the 40-odd ­winter-​overers completely isolated.

3. Elevated station The main building isn’t just a ­dormitory; it also has a greenhouse for growing food and a sauna for warming up after frigid days. The structure sits on hydraulic stakes that allow snowdrifts to pass beneath and that can boost the sta­tion if too many flakes accumulate.

4. Water & sewage pipes Carved about 40 feet down into the ice, tunnels house insulated pipes that bring up water freshly melted by the base’s power plant. Once a well runs dry, the crew constructs a new one farther along the line—and converts the old reservoir into a sewage pit.

5. Quiet sector Extreme isolation makes this one of the quietest—and therefore most sensitive—stations in existence. Instruments buried hundreds of feet beneath the ice track seismic waves that ­ripple across Earth, helping us understand how continents move.

6. Dark sector The dry, cold air at the pole, along with its high altitude and fixed position on Earth’s axis, makes it an ideal place to study the night sky. The South Pole Telescope’s 32-foot mirror captures leftover big-bang ­radiation that’s undetectable from most other parts of the planet.

7. IceCube Observatory This subterranean network of ­sensors spots collisions between atoms and neutrinos, high-energy subatomic particles. Physicists have a clear view of the resulting bursts of light thanks to the perfect alignment of water molecules in the vast untouched polar ice.

8. Clean air sector Because the South Pole is relatively free of pollutants, it’s pristine enough to provide a baseline measurement for Earth’s atmospheric conditions. Sensors at this lab get a highly accurate picture of greenhouse gases, crucial for tracking our progress against climate change.

antarctica
charted
Experiment
fall 2019
out there