When Sir Richard Branson unveiled the Virgin Oceanic submarine, he noted that “More men have been to the moon than... 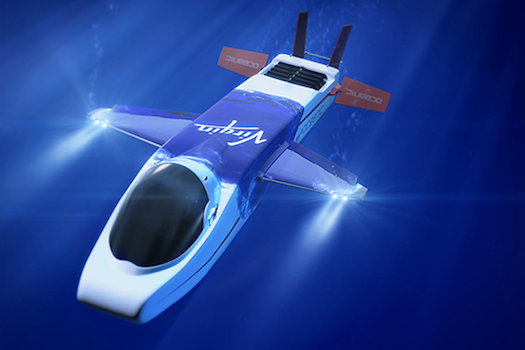 When Sir Richard Branson unveiled the Virgin Oceanic submarine, he noted that “More men have been to the moon than have been down further [underwater] than 20,000 feet.” To that end, he and an explorer pal will take the submarine to the deepest trenches of the Atlantic, Pacific, Indian, Southern, and Arctic Oceans, feeding first-of-its-kind data and video to Google, to be added to Google’s Earth and Maps databases. The deep sea is truly the final frontier on our planet, and Branson wants to make it as accessible as possible.

Virgin Oceanic is a five-journey proposal, in which they’ll hit the Mariana Trench (Pacific), Puerto Rico Trench (Atlantic), Diamantina Trench (Indian), South Sandwich Trench (Southern), and Molloy Deep (Arctic). “They” is Sir Richard Branson (whose cojones can only be measured in cubic miles at this point) and Chris Welsh, an American pilot and explorer. The Puerto Rico Trench is the deepest trench known, and has never been explored.

Their submersible, designed by Graham Hawkes, is one of the more interesting parts of the journey. Shaped more like a dolphin than a traditional submarine, the Virgin Oceanic craft has an operating depth of 37,000 feet–about seven miles–which means it has to be able to withstand outrageous pressure, 1,500 times that of an airplane. Constructed of carbon fiber and titanium (with a quartz dome), the craft is currently undergoing tests–at that depth, the smallest crack would result in certain death for the pilots, both due to the immense pressure (13 million pounds) and the simple fact that there exist no other vehicles capable of a rescue mission. The sub travels at a maximum of three knots, and can dive at 350 feet per minute, so a dive to the bottom of the Mariana trench and back would take around five hours.

The sub is equipped with all the usual sensors and cameras, which should come in handy as this isn’t–or at least isn’t _only_–a swashbuckling “let’s see if we can do it” mission. Knowledge of the ocean at this depth is, without exaggeration, at 0%–we have no idea what’s going on down there, which is why Virgin is working closely with both Google and the renowned Scripps Institution of Oceanography, and with a host of other scientists from some of the best marine studies departments in the country.

Though further tests need to be carried out before the first expedition begins, Virgin Oceanic expects to dive the Mariana Trench sometime this year, with the remaining four dives spaced out throughout the following two years.