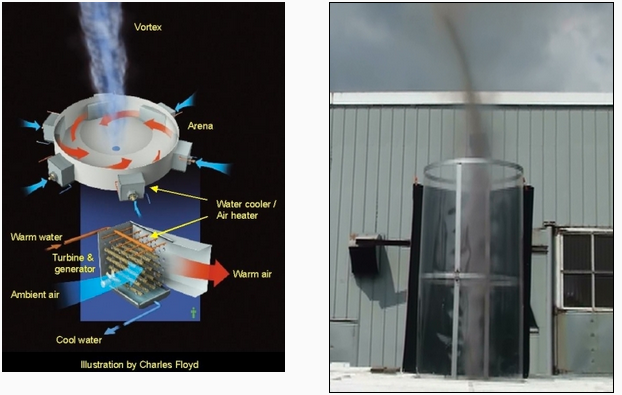 Michaud is a Canadian electrical engineer and entrepreneur. His idea is to create a power plant add-on that would tap into the waste heat generated at a regular gas- or coal-fired power plant. The add-on would work by blowing hot air into a hollow cylinder at a sharp angle, which would cause a swirling air current in the cylinder. Hot air rises, so the circular current would rotate upward. The temperature difference between the warm incoming air and cooler air above it would continually feed the vortex, which would suck in hot air rapidly at its base. This controlled tornado would spin other turbines, which would be used to create more electricity. The heat could also come from solar panels or warm water, Michaud says.

It’s a pretty neat concept, and you can see some of Michaud’s designs at his website. He says a full-sized vortex engine could be up to 100 meters in diameter–about 330 feet–and generate 200 megawatts of electricity. It wouldn’t emit any carbon dioxide or any other waste products in the process of creating power. Michaud told the Toronto Star that the waste heat from a 500-MW power plant could produce another 200 MW using this vortex engine.

The first step is to build a working prototype with Lambton College in Ontario. The prototype would be 131 feet tall and 26 feet in diameter, which apparently would be enough to produce a one-foot-diameter vortex that can drive a small turbine.

“The power in a tornado is undisputed,” Michaud said in a statement. And they would be safe to control–to shut them off, just kill the hot air supply.