Reinventing the array could usher in a new age for solar. 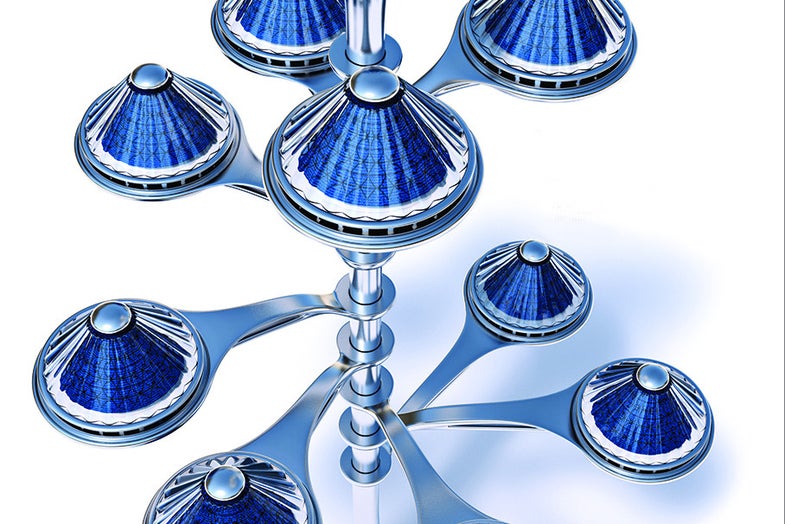 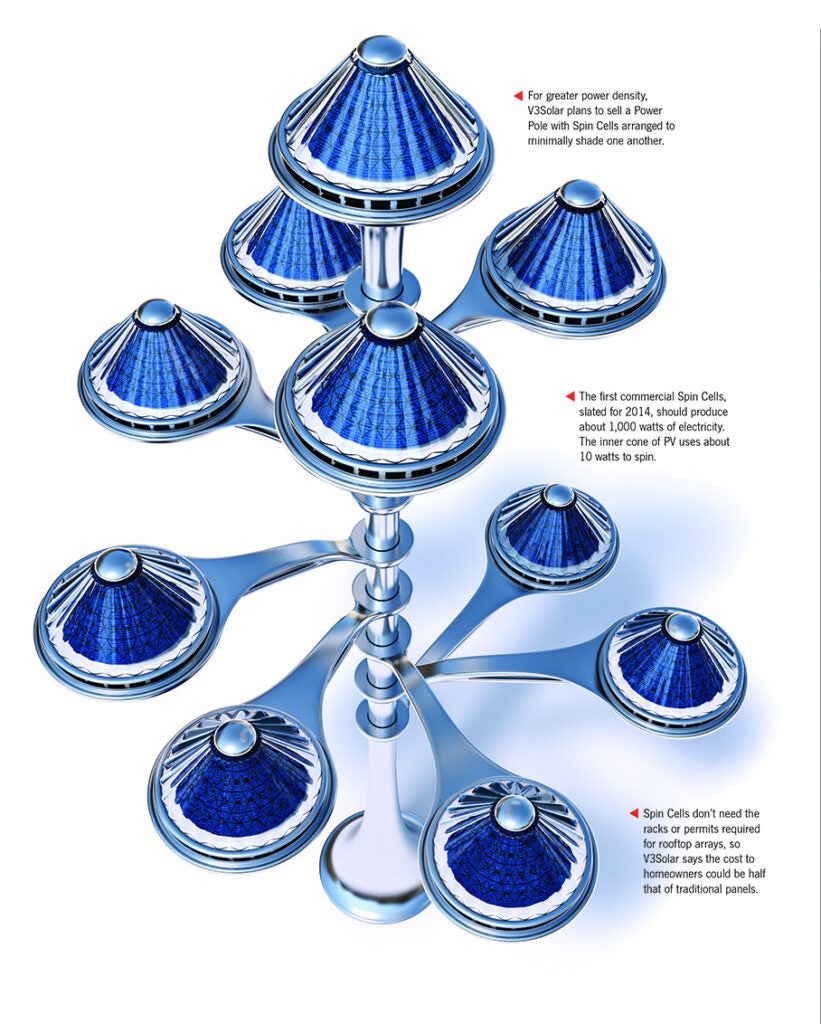 The solar market has been on fire. In the U.S., it’s grown by 600 percent over the past five years, culminating in 3,313 installed megawatts in 2012. This past March, seven solar projects added the only new utility power of any kind to the U.S. grid. But solar energy isn’t quite cost-competitive yet. Bridging the final gap requires breakthroughs that increase efficiency while cutting costs.

Even for photovoltaic (PV) panels, there’s such a thing as too much sun—when cells overheat, they become less efficient. V3Solar solved that problem with Spin Cell, a conical array that floats on magnets. An outer cone made of specialized lenses concentrates bands of sunlight on an inner cone covered with PV cells. The cells capture light energy but spin away before thermal energy can transfer. This constant cooling means V3Solar can use cheaper, less heat-tolerant material than other light-concentrating systems.

The Why Not? Plan

Drape the Planet with Solar Fabric

Would embedding solar cells in every bolt of fabric make a dent in our fossil-fuel consumption? It’s worth a shot. Greg Nielson, a Sandia National Laboratories researcher­—and 2012 PopSci “Brilliant 10” honoree—has developed solar glitter that could turn nearly any surface into a power source. Clusters of the dust-size cells (as small as 250 microns across) could be incorporated into standard PV panels, doubling their efficiency, or into the material for bags and clothing.

Solar couture is also a future goal of the New York City firm Pvilion, which produces power-generating fabric for larger-scale commercial applications. Its flexible panels can be as efficient as rigid ones but far easier to manipulate into structures like canopies for electric-vehicle-charging stations. Pvilion engineers are currently designing a covered footbridge in Florida and curtains for a building in New York City—in both cases, the fabric will power lighting for the entire structure—and a 124,000-watt solar facade membrane for a new U.S. embassy in London.

Concentrated solar farms typically use heavy-duty steel drives and motors to direct sunlight from rows of giant mirrors (called heliostats) onto a central tower. San Francisco–based Sunfolding devised a way to get the job done far more cheaply. Inspired by plants, which use tiny shifts in internal pressure to crane toward the sun, engineers designed Sunfolding’s heliostats to use compressed air to pivot into position. Made from plastic, the miniature drive system can be mass-produced at one fifth the cost of conventional models.

1. As pistons compress air, a fine mist of water absorbs the released heat. 2. The compressed air sits in low-cost tanks for storage. 3. Thermal energy is stored separately or routed to nearby buildings to heat them. 4. As air expands again, it absorbs heat from water and converts that to mechanical energy for power.

In order to deliver steady power, renewable energy systems require storage—a place to temporarily offload electrons. Facilities for compressed-air energy storage last much longer than grid-scale batteries. They use power produced during off-peak hours to compress air into underground caverns and then release it through a turbine to generate electricity when demand is high. LightSail Energy made that process mobile and modular by designing air-storage tanks that fit inside shipping containers. Plus, the company uses water to capture waste heat and boost efficiency.