To reach the bottom of all five oceans, this Texas businessman commissioned “the most significant vehicle since Apollo 11.” 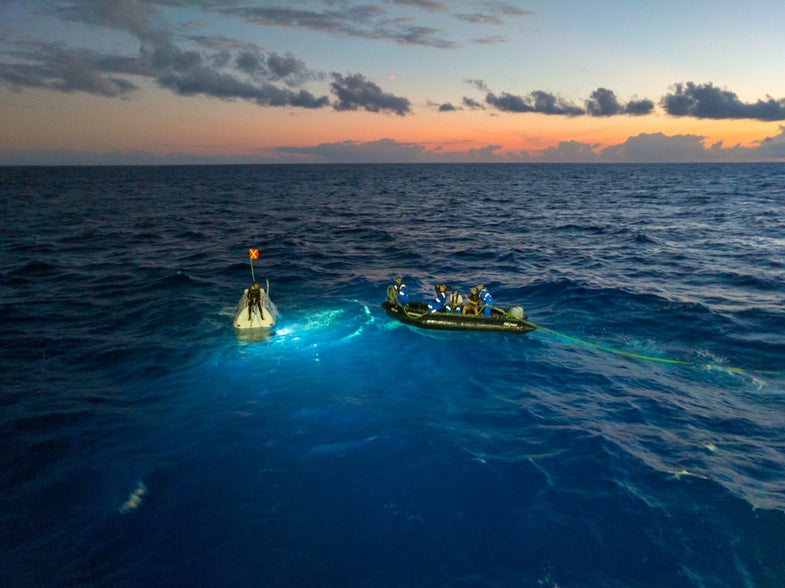 Since December 2018, Popular Science has followed extreme adventurer Victor Vescovo around the globe as he worked to be the first human to touch the deepest point in all five oceans. In chronicling his quest, dubbed The Five Deeps, we uncover the technologies, discoveries, and controversies that come with diving to into this largely unexplored world beneath the surface. This way for all of our coverage.

“One down!” Those were Victor Vescovo’s first words after climbing out of the hatch of the DSV Limiting Factor. He had just dove 27,480 feet down to the bottom of the Puerto Rico Trench, making him the first person to reach the absolute nadir of the Atlantic Ocean. Or at least those were the first intelligible words, over the waves, and the motor of the nearby Zodiac raft, and the low hum of the support vessel DSSV Pressure Drop, which was idling nearby.

The sun had just set, creating a ridiculous backdrop of orange sky and translucent blue Caribbean water. It would have seemed stage-directed, had I not been on the Pressure Drop for a week by then, observing three failed tests that put the whole dive in jeopardy. The Pressure Drop needed to leave its post at 7 p.m. on Wednesday, December 19 in order to reach its port call in the Dominican Republic the next morning. Vescovo surfaced from his six-hour, 55,000-foot round-trip journey to the ocean floor and back at approximately 5:45 p.m.—just over an hour to spare. Next year, provided there are no major setbacks, he plans to take the Limiting Factor around the planet in an attempt to become the first person to reach the lowest point in all five oceans. Hence those first words: one down, four to go.

The dive also made Vescovo the second deepest-diving solo sub pilot in history, after the film director James Cameron, who reached the bottom of the Pacific’s deepest point, the Mariana Trench, in 2012. Vescovo will head there, too, probably in the summer of 2019, after attempting the 8,180-meter (26,847-foot) South Sandwich trench near Antarctica, and the 7,290-meter (23,917-foot) Java Trench, with a likely stop to visit and film the wreck of the USS Indianapolis en route.

This audacious, self-funded mission is known as the Five Deeps. It is more than three years in the making and began when Vescovo asked Triton Subs, a small, Florida-based maker of submersibles, if they could build him a vehicle capable of reaching any point in the world’s oceans.

This was a big ask. Three years ago, there was no vehicle on Earth capable of such a feat—or anything close to it. Cameron’s sub, the DSV Deepsea Challenger, caught fire after a freak highway accident a few years after his expedition and was never repaired. And there are only five working submersibles capable of going past the oceans’ average depth of 4,000 meters (13.123 feet). All five of those are owned and operated by national governments, and unavailable for private use. But Triton co-founder Patrick Lahey had been chewing over the idea of a full-ocean-depth sub for years; he just needed someone to pay for it. (The sub cost $35 million. With the Pressure Drop the price tag is more than $45 million.) That arrangement worked for Vescovo, a Dallas-based private equity investor with a thirst for adventure. He’s one of just 12 Americans to have climbed the Seven Summits and skied to both poles—the so-called Grand Slam of adventuring.

So when Vescovo passed 7,100 meters (23,200 feet) sometime early Wednesday afternoon, the Limiting Factor surpassed China’s Jiaolong (which reached 7,020 meters in 2012) to become the world’s deepest-diving submersible. And if Vescovo’s successful in reaching Challenger Deep in the Mariana Trench next year, it will be the only sub officially rated to full ocean depth—built to repeatedly reach the sea’s deepest places.

Almost no one thought it was a good idea for Vescovo to attempt the Puerto Rico Trench dive solo. Lahey tried very hard to convince him that he needed a co-pilot—someone with submersible diving experience—but that was a non-starter. Vescovo is a jet-rated pilot who’s been flying planes since age 18. He had Triton install a simulator in his garage so that he could practice while the sub was being assembled in Florida. He was either going alone, or not at all.

Complicating matters, the Limiting Factor is a prototype, designed and built using exotic parts—the most important one a spherical titanium pressure hull surrounded by a sleek cocoon of syntactic foam. The Limiting Factor’s chief electrical engineer, Tom Blades, simplified the sub’s electronics by basing its seafloor navigational capabilities on three $250,000 landers deployed from the Pressure Drop before launch. The sub triangulates position on the bottom by pinging modems on those landers, as well as the surface. The landers also serve as three additional science stations. They’re equipped with fish traps, push cores for sediment sampling, and “bio boxes,” where Vescovo can place samples plucked from the seafloor using the sub’s robot arm. (After every dive, Dr. Alan Jamieson of England’s Newcastle University—a specialist on the infrequently studied “hadal zone” and leader of the Five Deeps science team—will gather the samples for study. Jamieson also deploys his own landers, and thinks his team found four new species, all amphipods, in the Puerto Rico trench alone.)

Expedition leader Rob McCallum calls the Limiting Factor “the most significant vehicle since Apollo 11,” and while that’s a little hyperbolic, it’s not completely outlandish either. There is a reason no sub exists that can make repeat visits to the ocean bottom. They are expensive to build, and extremely difficult to engineer. Every part must be able to function at sea level, and also at 1,100 times that pressure, while protecting electronics that will be submerged in salt water, which corrodes metal at five times the rate of fresh water, for hours.

Really, Vescovo wasn’t just asking to pilot the Limiting Factor; he was asking to become a test-pilot of a sub that was still working out kinks two days before his dive. Initial tests in August were fraught with issues. Vescovo reached 5,000 meters (16,400 feet), and the sub was certified to that depth, but it went immediately back to Florida, where Lahey and his team took it completely apart to make changes.

On the Puerto Rican Trench mission, the first test, scheduled for December 15, was scratched because of a leaky hatch. A day later, with Lahey on board to make his final check of Vescovo’s piloting ability, the dive was scratched again for the same reason—after an extremely hairy launch and recovery in rough seas that caused Vescovo to lose his lunch. On the 17th, the two men managed to get the Limiting Factor to 1,000 meters (3,280 feet) on the leeward side of Puerto Rico, simplifying launch and recovery, but the hatch was still leaking slightly at the surface. There were also issues with the variable ballast system, two thrusters got smashed during recovery, and worst of all, the $350,000 robot arm that Vescovo would use to collect scientific samples from the sea bottom fell off and is now a very expensive sonar blip. “I’ve joked that this sub cost me an arm and a leg,” Vescovo said later. “Today, it literally cost me an arm.”

Expedition leader McCallum is a relentlessly cheerful but also very careful voice in the room. He was the expedition leader for Cameron’s Challenger Deep, and the leader for a number of missions to the Titanic, using Russia’s Mir subs. So when he called an all-hands meeting that night, most of us onboard expected him to announce that the mission was being postponed. Instead, he said that Vescovo had decided to go forward. Triton’s engineers would have until the morning of the 19th to repair the submarine, minus the arm (which wasn’t mission critical). If they could, Vescovo would go for it; if not, they’d call it off.

By early the next afternoon, Lahey was bouncing around the ship, radiating optimism. His guys, he said, had nailed it. They’d solved the hatch issue, rewired systems to fix a few mechanical bugs, and ironed out some communication problems. Heather Stewart, a consulting marine geologist, was convinced that she’d identified the absolute lowest point of the trench using data captured by the ship’s multi-beam echosounder, thought to be the most advanced sonar on any civilian vessel. And Jonathan Struwe, the German engineer from DNV-GL, which certifies submersibles, was satisfied that the sub was safe enough to go for it.

A crew from Atlantic Productions, embedded with Five Deeps to film a five-part TV series that will air on Discovery sometime in late 2019 or early 2020, cornered Paul-Henri “PH” Nargeolet—a veteran of deep sea exploration whose Five Deeps uniform patch reads “Legend”—to ask if he had concerns. Was this dive risky? “Yes and no,” replied the man who has dove on the Titanic wreck more than 30 times. “I would tell you it’s more dangerous to cross the street where you live than to dive past 4,000 meters. But, in the extremely rare chance [of an accident], you are dead before you know something happens.”

The next morning, McCallum gathered the troops one last time. “We have all worked very long and very hard to get to this point … the culmination of a dream that’s become a reality.” He acknowledged the many people who played a role: “Scientists give us purpose. Sonar tells us where to go. Filmmakers are telling our story. And the ship’s crew got us here…We just have to go and execute. The plan is pretty simple.” McCallum considered that and laughed. “He says, preparing to send a submersible to 8,400 meters under the sea.”

“Life support good,” Vescovo replied. “Starting pumps … See you on the other side.”

Six hours later, at sunset, McCallum was there in a Zodiac raft to pluck him from the sub. “Welcome home, Victor,” he said, and drove him back to the Pressure Drop, where Lahey was furiously hugging his engineers.

Later, as Vescovo clutched a bottle of champagne, Lahey handed him a sheet of paper. “I’ve never given anybody one of these: a diploma for certified test pilot,” he said. “I distinctly remember my first dive in a sub. I went to 1,400 feet. You only went 20 times that far.”