A look at tomorrow’s turbines 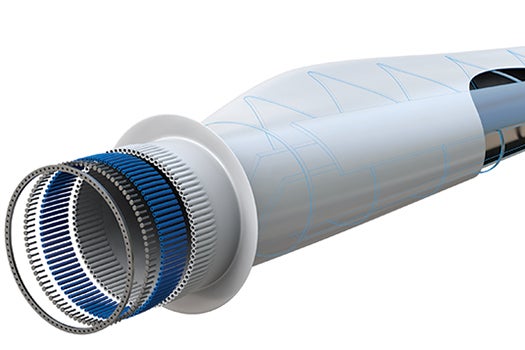 Metal inserts built into the carbon-fiber blade during manufacture mean the root end, bolted to the hub, can be slimmer, stronger, and more aerodynamically efficient. • Fabricating the carbon fiber in modular pieces, rather than one long blade, ensures the material’s consistency and reduces the risk of failure. • An erosion-protection material molded into the leading edge of the blade reduces wear and tear over the blade’s lifetime.

In 2012, wind power added more new electricity production in the U.S. than any other single source. But even with 60 gigawatts powering 15 million homes, wind supplants just 1.8 percent of the nation’s carbon emissions. Tomorrow’s turbines will have to be more efficient, more affordable, and
in more places.

Big rotors generate more electricity, particularly from low winds, but oversize trucks hauling blades the length of an Olympic pool can’t reach many wind-energy sites. Blade Dynamics fabricates its 160-foot, carbon-fiber blade in multiple pieces, which can then be transported by standard trucks and assembled at a nearby location. It’s a stepping-stone for 295-foot and 328-foot blades now being designed for offshore turbines. (Currently, the world’s longest prototype is 274 feet.) The colossal size should enable 10- to 12-megawatt turbines, double the generation capacity of today’s biggest models. 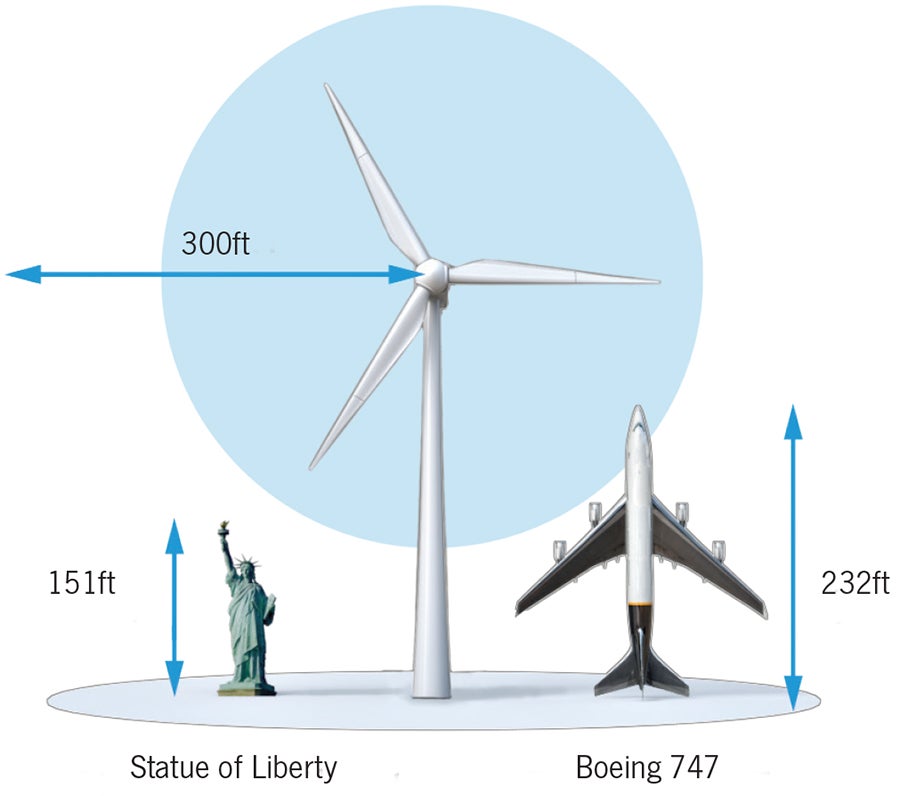 Reducing the variability of wind energy could position it to compete as a stable source of power. General Electric’s new 2.5-megawatt, 394-foot-diameter wind turbine has an optional integrated battery for short-term energy storage. It also connects to GE’s so-called Industrial Internet so it can share data with other turbines, wind farms, technicians, and operations managers. Algorithms analyze 150,000 data points per second to provide precise region-wide wind forecasts and enable turbines to react to changing conditions, even tilting blades to maximize power and minimize damage as a gust hits.

Solar Wind Energy’s downdraft tower is either ingenious or ludicrous. The proposed 2,250-foot-high concrete tower will suck hot desert air into its hollow core and infuse it with moisture, creating a pressure differential that spawns a howling downdraft. “You’re capturing the last 2,000 feet of a thunderstorm,” says CEO Ron Pickett. The man-made tempest would spin wind turbines that could generate up to 1.25 gigawatts (though it’s designed to operate at 60 percent capacity) on the driest, hottest summer days—more than some nuclear power plants. The Maryland-based company plans to break ground in Arizona as soon as 2015, provided it can secure $900 million in funding—a large sum but perhaps not outlandish when compared with a $14-billion nuclear reactor now under construction.