Microbes living in the beasts' coats could be deadly to malaria and cancer cells. 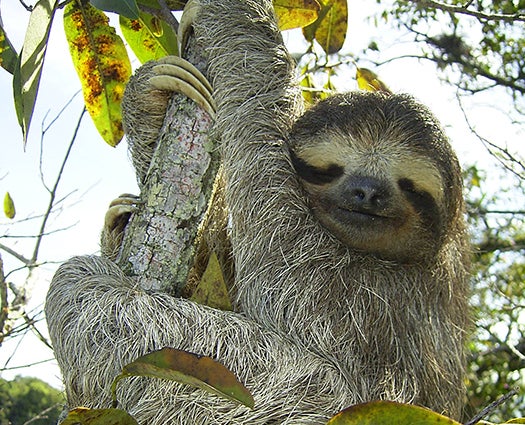 Sloths are cute. Take this video of baby sloths being washed:

Until today, this video might represent sheer joy. But a new study causes a different reaction: NOOOO! DON’T KILL THE FUR FUNGI!!!

New research, you see, has found that chemicals excreted by microbes in sloth fur had potent activity against a host of human pathogens, and even breast cancer cells, and possess anti-malaria and antibacterial properties. The study found that chemicals isolated from fungi in three-toed sloths were deadly for parasites that cause malaria and Chagas disease (Plasmodium falciparum and Trypanosoma cruzi, respectively). The research was only a partial cataloguing of microbes that live in sloth fur, which the scientists describe as a potential goldmine for drug discovery.

It’s not surprising on the face of it that sloths harbor some interesting microscopic fur-friends: Cyanobacteria have been known to cover their coats, coloring them green and potentially helping them blend into the rainforests of Central America that they call home. They are also relatively little studied and not exactly easy to procur for your average researcher–the three-toed sloths (Bradypus variegatus) used in this study were found in a Panamanian nature reserve. It also comes as no shock that fungi create chemicals of interest to drug developers, as fungi have spawned drugs from penicillin to Lovastatin.

The researchers were surprised, however, by the scope of the fur-fungi’s antimicrobial properities. Very few chemicals have been found to have activity against Chagas disease, for example, and the drugs currently used to treat it are often discontinued due to their negative side effects. A total of 20 of the chemicals isolated from these microbes “were active against at least one bacterial strain, and one had an unusual pattern of bioactivity against Gram-negative bacteria that suggests a potentially new mode of action.” Which means it could, one day, possibly pave the way for new antibiotics.