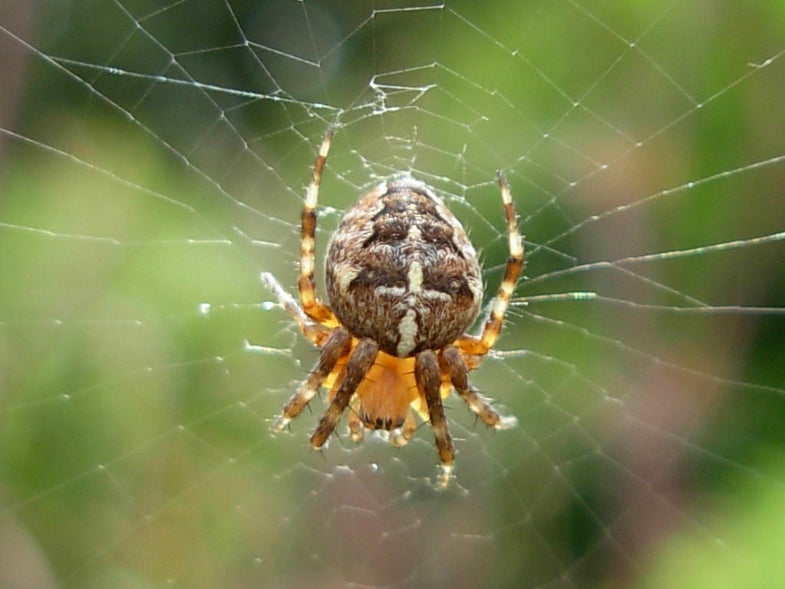 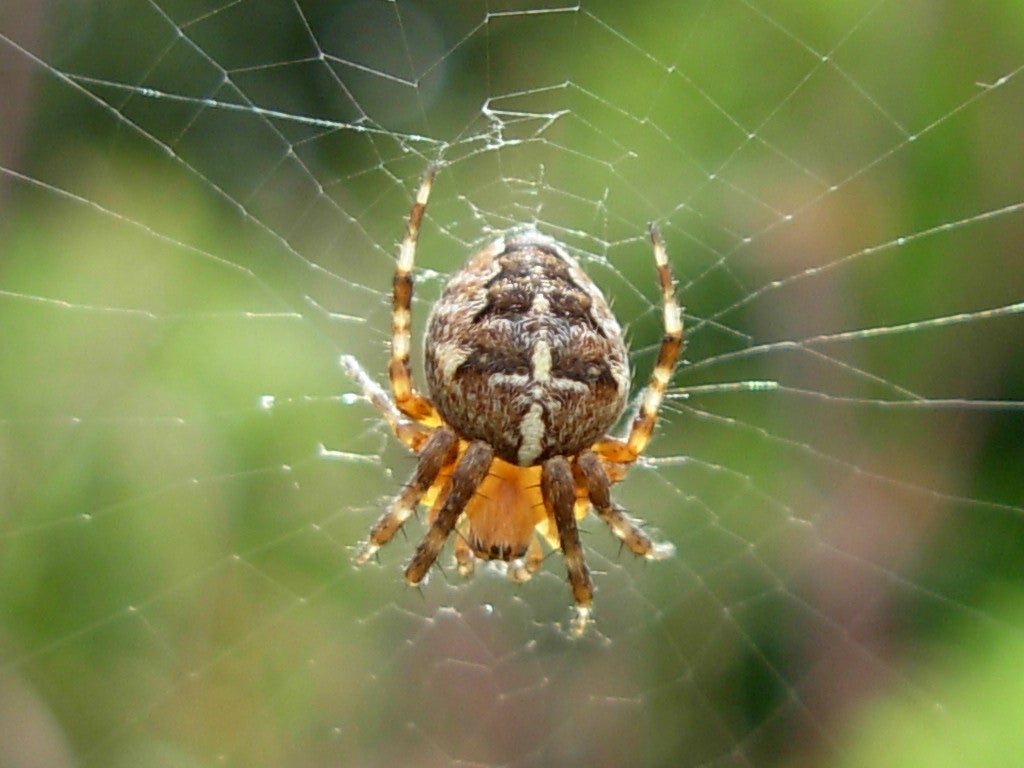 Sometimes, spiderwebs catch more than just insects: They also ensnare pollen grains, dust and fungal spores. But orb weavers, which carefully husband their resources, turn this into a well-balanced meal.

The orb-weaving spiders, in the genus Araneus, include the European garden spider and hundreds of other species. They recycle their large, intricate webs by eating the silk: That way, the protein is reabsorbed into their silk glands to be spun into a new web. When they do this, the spiders also eat whatever non-animal bits are stuck to the web. It’s like when your mom tricks you into eating vegetables by putting them into beef stew — you really want the meat and the gravy, but you also end up eating the peas.

But spiders eat a whole lot of pollen and fungal spores, according to a new study. The grains are too big to be swallowed by accident, which means the spiders have to “digest them extraorally by enzymes in the active act of consumption.” (We would call this chewing.)

Spiders eat so many pollen and fungal bits that we should reclassify them as omnivores, rather than carnivores, according to this study. Just like us! 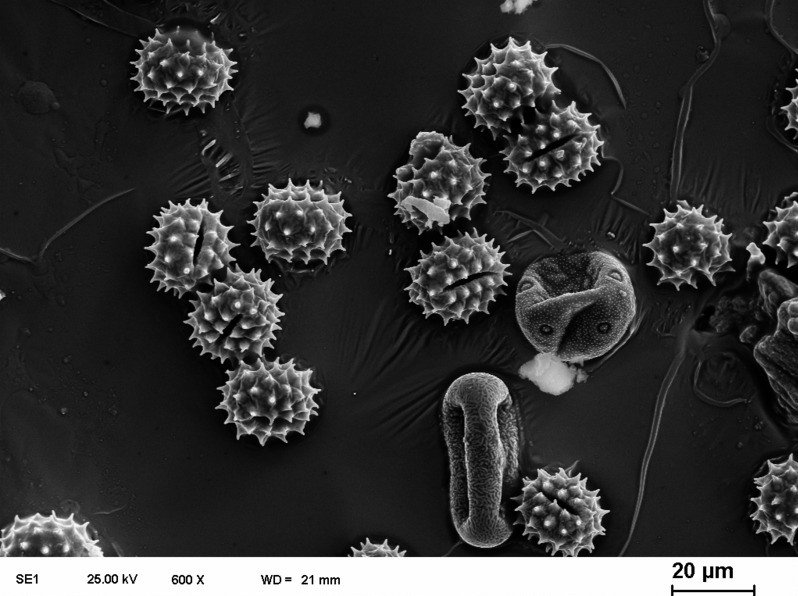 Researchers Benjamin Eggs and Dirk Sanders looked at previous research on orb-weaving spiders and their webs, and noted most webs had pretty high concentrations of stuck-on pollen grains. They also noted that in a feeding experiment, spiderlings (spiderlings, you guys, aww) who were fed pollen lived longer than spiders who only ate insects. They hypothesized that pollen is an important part of spiders’ diets, and they set out to analyze some arachnids.

For a month in 2012, they fed 20 spiderlings from two species a diet of fruit flies. The control group only got flies, and the treatment group got flies and birch pollen. “Whenever a spiderling of the treatment group had built a web, it was sprinkled with birch pollen,” the authors explain. After the experiment, they studied the spiders’ guts to examine stable isotopes of nitrogen, which allowed them to examine what the spiders ate. The result was “direct proof that orb-weaving spiders (Araneidae) indeed feed on pollen captured in the sticky spirals of their webs,” the authors write.

They do this even when they can catch flies. And about 25 percent of the spiders’ diet consisted of pollen, with the other other 75 percent flying insects. The amount of pollen consumption was similar in the lab experiment and in the field, which suggests orb-weavers “actively feed on pollen for optimal nourishment.”

What’s still not clear is whether adult spiders eat lots of pollen, too, or whether spiderlings need it as a nutritional supplement until enough flies are available. But even if they only eat pleny of pollen as juveniles, that’s enough to consider them omnivores, Eggs and Sanders say. Their paper appears in PLoS One. 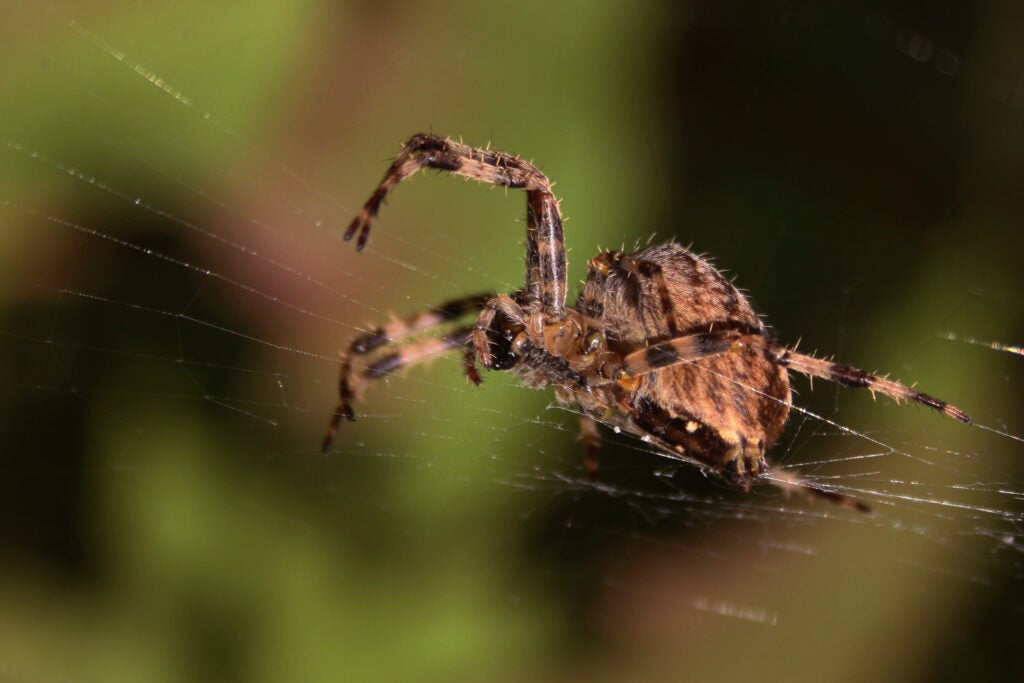