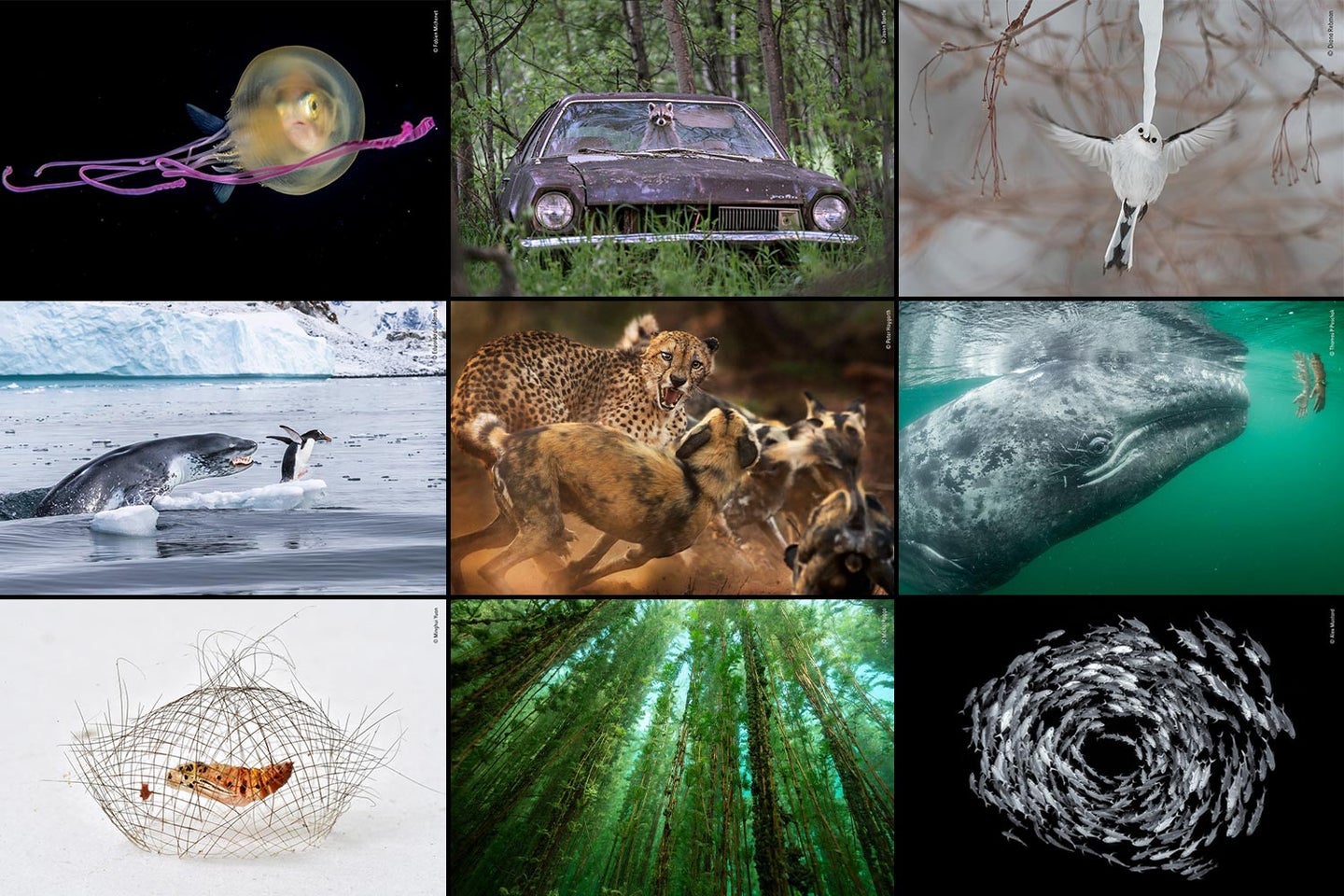 There are millions and millions of species on our planet and just as many opportunities to photograph them. But it still takes expertise, persistence, and a fair bit of chance to get the one shot that teaches us something new about the world of plants and animals. These extraordinary selections from the London Natural History Museum’s Wildlife Photographer of the Year exhibition speak to those skills—and give us an illuminating peek at nature’s many mysteries and complexities. Check back on the museum’s website on October 15 for the final list of winners.

A newborn hippo, just days old, was keeping close to its mother in the shallows of Lake Kariba, Zimbabwe, when a large bull suddenly made a beeline for them. He chased the mother, then seized the calf in his huge gape, clearly intent on killing it. After trying to drown it, he tried to crush it to death. Adrian’s fast reaction and fast exposure captured the shocking drama. Infanticide among hippos is rare but may result from the stress caused through overcrowding when their day-resting pools dry out.

Slender stems of native Eurasian watermilfoil, bearing whorls of soft, feathery leaves, reach for the sky from the bed of Lake Neuchâtel, Switzerland. Michel has photographed freshwater regions worldwide, but this was the first time he had dived in the lake nearest to his home. He was swimming near the surface—absorbed with the beauty of the plants and their small reddish flowers—when he spotted a huge pike disappearing into the mass of vegetation below. Very slowly, he sank down for a closer look. When he reached the bottom, he found himself immersed in an underwater jungle with an endless view.”

A gentoo penguin—the fastest underwater swimmer of all penguins—flees for its life as a leopard seal bursts out of the water. Eduardo was expecting it. He had spotted the penguin, resting on a fragment of broken ice. As Eduardo’s inflatable headed towards the penguin, the seal passed directly beneath the boat. Moments later, it surged out of the water, mouth open. The penguin made it off the ice, but the seal now seemed to turn the hunt into a game.

In a rare encounter, a lone male cheetah is set upon by a pack of African wild dogs. Peter had been following the dogs by vehicle as they hunted in Zimanga Private Game Reserve, KwaZulu-Natal, South Africa. A warthog had just escaped the pack when the leading dogs came across the big cat. At first, the dogs were wary, but as the rest of the 12-strong pack arrived, their confidence grew, and they began to encircle the cat, chirping with excitement. In a few minutes the spat was over as the cheetah fled.

Standing side-on to a wall, his face and camera pressed against it, Minghui focused on the remarkable cocoon of a Cyna moth pupa. The caterpillar had used its long, hair-like setae to weave the delicate cocoon cage, held with silk and just 1.5 inches long, inside which it would pupate. The cage has an aperture at either end, through which the caterpillar expels its outer layer after its final molt and then—once it has reorganized its body—emerges from the top as a beautiful white moth, decorated in red and black.

When Carlos’s family planned a trip to Panama’s Soberanía National Park, sloths were high on their must-see agenda. They were not disappointed. For several days, from the observation deck of the park’s canopy tower, Carlos could photograph not only birds but also this brown-throated three-toed sloth—the orange fur and the dark stripe on its back marking it as an adult male. By deliberately placing the animal in one part of the frame, Carlos also captured the atmosphere of the forest—“the sloth in its environment.”

A curious young grey whale approaches a pair of hands reaching down from a tourist boat. In San Ignacio Lagoon, on the coast of Mexico’s Baja California, baby grey whales and their mothers actively seek contact with people for a head scratch or back rub. The lagoon is one of three that comprise a grey whale nursery and sanctuary—a key winter breeding ground for this surviving breeding population of grey whales, the eastern North Pacific ones. For Tom Peschak, a whale that demanded petting and got too close for him to focus was a first.

From a distance, the beach scene at Alabama’s Bon Secour National Wildlife Refuge looked appealing: blue sky, soft sand, and a Kemp’s ridley sea turtle. But as Matthew and the strandings patrol team got closer they could see the fatal noose around the turtle’s neck attached to the washed-up beach chair. The Kemp’s ridley is not only one of the smallest sea turtles—just two feet long—it is also the most endangered. As Matthew witnesses on his daily nesting patrol, a danger is injury or drowning resulting from discarded fishing gear and rubbish.

Pinned to a white wall are the skins of rattlesnakes. Surrounding them are signed bloody handprints—triumphant marks of those who have skinned snakes at the annual rattlesnake round-up in Sweetwater, Texas. Each year tens of thousands of rattlesnakes are caught for this four‑day festival. They are kept in poor conditions before being brought to the festival and tossed into snake pits. What Jo-Anne found most unsettling about this image was “that so many of the bloodied handprints belonged to children.”

Hugging its flippers tight to its body, the Weddell seal closed its eyes and appeared to fall into a deep sleep. Lying on fast ice (ice attached to land) off Larsen Harbour, South Georgia, it was relatively safe from its predators and so could completely relax and digest. Shooting from an inflatable boat, Ralf tightly framed the sleeping seal, using the white backdrop of ice and soft light from the overcast sky to mimic the effect of a studio portrait. Converting his image to black and white accentuated the tones and textures of the seal’s dense mottled fur.

An ever-adaptable raccoon pokes her bandit-masked face out of a 1970s Ford Pinto on a deserted farm in Saskatchewan, Canada. In the back seat, her five playful kits trill with excitement. It was a sentiment shared by Jason, waiting silently in a nearby hide, who had been hoping for this chance every summer for several years. The only access into the car was through the small hole in the cracked safety glass of the windscreen. The gap was blunt‑edged but too narrow a fit for a coyote, making this an ideal place for a mother raccoon to raise a family.

A juvenile jackfish peers out from inside a small jellyfish off Tahiti in French Polynesia. With nowhere to hide in the open ocean, it has adopted the jelly as an overnight travelling shelter, slipping under the umbrella and possibly immune to the stinging tentacles, which deter potential predators. In hundreds of night dives, says Fabien, “I’ve never seen one without the other.” It is not clear if a jelly derives any benefit or why the relationship breaks down when water acidifies.

On a nightime field trip in the Peruvian Amazon rainforest, Frank spotted this bizarre-looking weevil clinging to a fern stem. Its glazed eyes showed it was dead, and the three antennae-like projections growing out of its thorax were the ripe fruiting bodies of a “zombie fungus.” Spreading inside the weevil while it was alive, the parasitic fungus had taken control of its muscles and compelled it to climb. The fungus then started to grow fruiting bodies topped by capsules that would release a multitude of tiny spores to infect new prey. Shooting the weevil head on, Frank isolated the fungus against a soft background to emphasize the capsules.

On a bitterly cold morning on the Japanese island of Hokkaido, Diana came across a delightful scene. A flock of long-tailed tits and marsh tits were gathered around a long icicle hanging from a branch, taking turns to nibble the tip. Two days later, Diana returned and found that the icicle remained and tits were still drinking from it. But when the sun came out and the ice began to melt, one long‑tailed tit chose to cling to the icicle instead of hovering. That instantly brought the performance to an end, as the entire structure cracked and then crashed to the ground.

In the clear water of the Red Sea, a shoal of bigeye trevally circle 80 feet down at the edge of the reef. For the past 20 years Alex has travelled here, to Ras Mohammad—a national park at the tip of Egypt’s Sinai Peninsula—to photograph the summer-spawning aggregations of reef fish. This time, it was the high numbers of bigeye trevally. Their circling behavior is a dating exercise prior to pairing up, though it also deters predators. Alex captured the shape of the shoal against the deep blue water below, the iridescent angled fish reflecting the light from the sun and his strobes.