But it's to protect them! 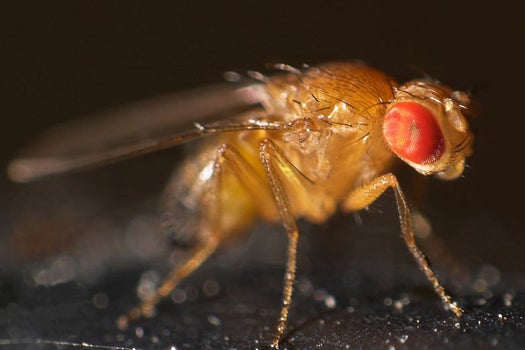 Humans have been using alcohol as a medicine since ancient times, using it as an antiseptic and a pain killer, among other things. We’re not the only species that does so, apparently. According to biologists at Emory University, fruit flies force alcohol on their larvae to protect them from parasitic wasps.

Common fruit flies (Drosophila melanogaster) have adapted to be able to largely digest alcohol in their main food source, the rot on overripe and fermenting fruit. Fruit fly larvae been known to self-medicate, consuming high levels of alcohol in order to fight off endoparasitoid wasps, which lay eggs inside fruit flies that eventually hatch and eat their host from the inside out. The alcohol is still somewhat toxic for them, but the wasps, which don’t have a tolerance for the toxic effects, are a bigger danger, so the flies kill the parasite by raising their own blood alcohol levels.

But it seems that the flies also try to protect the next generation from the wasp threat. When wasps are present, fruit flies sense that their children will be at risk for infection, and lay their eggs in alcoholic food to protect them.

Researchers released adult female fruit flies into a cage with parasitic wasps and a cage with no wasps and looked to see if they preferred to lay their eggs in the petri dish that contained alcohol. Overwhelmingly, they did — 90 percent of flies in the cage with wasps laid eggs in the alcohol dish, versus only 40 percent in the wasp-free dish. They consistently chose to deposit their eggs on petri dishes that contained the highest level of alcohol that would be found in nature, despite the fact that they were bred in a lab and had never encountered parasitic wasps before.

The flies could tell the difference between wasps that infect larvae and other wasp species that infect flies a little later in their lifespan, when they are pupae. The fruit flies would only lay their eggs in alcohol in the presence of larvae-infecting species, because it wouldn’t help prevent infection for pupae.

“Fly larvae usually leave the food before they pupate, so there is likely little benefit to laying eggs at alcoholic sites when pupal parasites are present,” explains Todd Schlenke, one of the study’s authors.

Schlenke was surprised that the flies used sight to identify danger to their larvae. “I thought the flies were probably using olfaction to sense the female wasps. The small, compound eyes of flies are believed to be more geared to detecting motion than high-resolution images.”

The researchers found that a number of fly species they tested used alcohol to protect against parasites. And alcohol-seeking behavior seemed to persist for the remainder of the fly’s life, even if wasps were no longer present. “Medication may be far more common in nature than we previously thought,” Schlenke says.