The Human Race Will Come To An End. What’s Next?

Given evolution’s trajectory, we will almost certainly transform into augmented versions of our current selves. The big question now is, can we survive long enough to become the next humans? 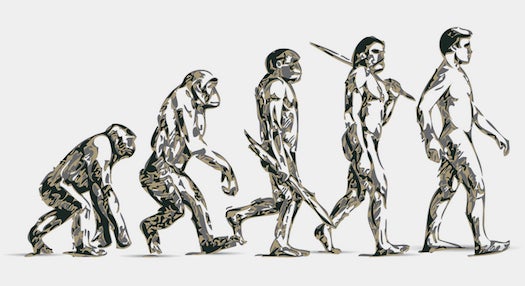 What does the future have in store for the human race?

In his new book, Chip Walter analyzes how modern humans evolved into today’s dominant, and only surviving human, species. Here he speculates on humanity’s next chapter.

Evolution, as the past 4 billion years have repeatedly illustrated, holds an endless supply of tricks up its long and ancient sleeve. Anything is possible, given enough millennia. Inevitably the forces of natural selection will require us to branch out into differentiated versions of our current selves, like so many Galápagos finches… assuming, that is, that we have enough time to leave our evolution to our genes.

We won’t, though. Instead, we will come to an end, and rather soon. We may be the last apes standing, but we won’t be standing for long.

A startling thought, this, but all of the gears and levers of evolution indicate that when we became the symbolic creature, an animal capable of ardently transforming fired synapses into decisions, choices, art, and invention, we simultaneously caught ourselves in our own crosshairs. Because with these deft and purposeful powers, we also devised a new kind of evolution, the cultural variety, driven by creativity and invention. So began a long string of social, cultural, and technological leaps unencumbered by old biological apparatuses such as proteins and molecules.

We are undoing ourselves because the old baggage of our evolution impels us to. We already know that every animal wants power over its environment and does its level best to gain it. Our DNA demands survival. It is just that the neoteny (youthfulness) that has made us the Swiss Army knife of creatures, and the last ape standing, has only amplified, not replaced, the primal drives of the animals we once were. Fear, rage, and appetites that cry for instant gratification are still very much with us. That combination of our powers of invention and our ancient needs will, I suspect, soon carry us off from the grand emporium of living things.

The best evidence that we are growing ragged at the hands of the Brave New World we have busily been rolling off the assembly line is that growing numbers of us freely admit to being thoroughly stressed. A recent study reported that the United States is “a nation at a critical crossroads when it comes to stress and health.”* Americans are caught in a vicious cycle: managing stress in unhealthy ways while assembling insurmountable barriers that prevent them from revising their behavior to undo the damage they are inflecting on themselves. As a result, 68 percent of the population is overweight. Almost 34 percent are obese. (This is rarely a problem in hunter-gatherer cultures.) Three in ten Americans say they are depressed, with depression most prevalent between the ages of forty-five and sixty-five. Forty-two percent report being irritable or angry, and 39 percent nervous or anxious. Gen Xers and so-called Millenniums admit to being more stressed about personal relationships than even their baby-boomer parents. It’s so bad that the results of our anxieties have found their way into dental offices, where dentists now spend far more of their time treating patients for jaw pain, receding gums, and worn teeth than they did thirty years ago. Why? Because we are tense and anxious, grinding our teeth down to nubs as we sleep.

Stress, as the experience of lab rats everywhere has repeatedly testified, is a sign that a living thing is growing increasingly unfit for the world in which it lives, and as Darwin and Alfred Russel Wallace astutely observed more than 150 years ago, when a living thing and its environment are no longer a good match, something has to give, and it is always the living thing.

Our demise may be a butterfly-like metamorphosis.
How are we handling our stress? Not too well. Rather than relaxing or getting more exercise when pressures mount, studies show that we instead skip meals, spend more time online or in front of the TV, then overeat and lie awake at night perfectly prepared to enter the next day bleary-eyed, short-tempered, and exhausted. What triggers this behavior? Those old primal drives and appetites we struggle so mightily to ignore.

Which returns us to the question, what next?

Our demise doesn’t have to be a Terminator-style annihilation that leaves the world emptied of all humans, postapocalyptic cities stark and decaying with the smashed remains of our cultural accomplishments. It may be more of a butterfly-like metamorphosis, a transformation in which we step over the Rubicon of our old selves and emerge as a new creature built on our own backs without ever realizing, at least early on, that we are no longer the species we thought we were. Did the first Neanderthal know that he, or she, was no longer Homo heidelbergensis? Those passages are made gradually.

Perhaps we will simply morph into Cyber sapiens,* a new human, infinitely more intelligent than you or I are, perhaps more socially adept, or at least able to juggle large tribes of friends, acquaintances, and business associates with the skill of a circus performer. A creature more capable of keeping up with the change it generates. To handle the challenges of time shortages and long distances, Cyber sapiens may even be able to bilocate or split off multiple, digital versions of themselves, each of whom can blithely live separate lives and then periodically rejoin their various digital selves so that they become a supersize version of a single person. Imagine being able, unlike Robert Frost’s traveler in his poem “The Road Not Taken,” to choose both paths, each with a separate version of yourself. It makes you wonder if something essential in us might disappear should such possibilities come to pass. But then, perhaps, that is what will make the new species new.

A whole group of Homo sapiens are already contemplating what the next version of us might be like. They call themselves transhumanists, anticipating a time when future anthropologists will have looked back on us as a species that had a nice run, but didn’t make it all the way to the future present.

Transhumanists foresee a time when beings will emerge who will literally be part biology and part machine. In this I suspect they are right, the logical next step in a long trend. We are already part and parcel of our technologies after all. When was the last time you checked your cell phone or simply walked to work, hunter-gatherer style? We have long been coevolving with our tools. It’s just that now the lines between humans and machines, reality and virtuality, biology and technology, seem to have become especially blurry and will soon twitch and blink away.

The question now is, can we survive ourselves?Transhumanists predict that by melding molecule-size nanomachines with old-fashioned, carbon-made DNA the next humans might not only speed up their minds and multiply their “selves,” but boost their speed, strength, and creativity, conceiving and inventing hyper-intelligently while they range the world, the solar system, and, in time, the galaxy. In the not-distant future we may trade in the blood that biological evolution has so cunningly crafted over hundreds of millions of years for artificial hemoglobin. We may exchange our current brand of neurons for nanomanufactured digital varieties, find ways to remake our bodies so that we are forever fresh and beautiful, and do away with disease so that death itself finally takes a holiday. The terms male and female may even become passé. To put it simply, a lack of biological constraint may become the defining trait of the next human.

There could be a downside to these sorts of alterations, I suppose, should we find ourselves with what amounts to superhuman powers, but still burdened by our primal luggage. Our newfound capabilities might become more than we can handle. Will we evolve into some version of comic-book heroes and villains, clashing mythically and with terrible consequences? Powers like these give the term cutting edge a new and lethal meaning. And what of those who don’t have access to all of the fresh, amplifying technologies? Should we guard against a world of super-haves and super-have-nots? It is these sides of the equation I wonder about most.

Given evolution’s trajectory, short of another asteroid collision or global cataclysm, we will almost certainly become augmented versions of our current selves. That has been the trend for seven million years. Apes increasingly endowed with more intelligence, and more tools, becoming simultaneously wiser and more lethal. The question now is, can we survive… ourselves? Can we even manage to become the next human? It’s a close question.

I’m counting on the child in us to bail us out, the part that loves to meander and play, go down blind alleys, fancy the impossible, and wonder why. It is the impractical, flexible part we can’t afford to lose in the transition because it makes us free in ways that no other animal can be–fallible and supple and inventive. It’s the part that has gotten us this far. Maybe it will work for the next human, too.

*A term coined in my previous book Thumbs, Toes, and Tears: And Other Traits That Make Us Human.

This article was excerpted with permission from Last Ape Standing: The Seven-Million-Year Story of How and Why We Survived. Author Chip Walter is the founder of the website AllThingsHuman.net. His website is www.chipwalter.com, and his articles have appeared in Slate, The Wall Street Journal, Scientific American, and The Economist_ among many others._