Penis size works in combination with a couple other physical traits, a team of biologists found. 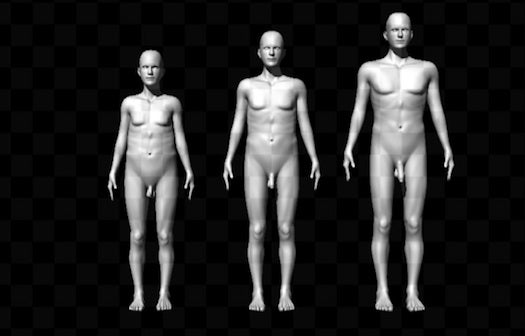 Despite what some people say, penis size matters to dude-loving ladies, according to a new study.

The penis effect was so strong that that the study’s authors, an all-male team of Australian biologists, wrote in their paper that it may have driven the evolution of bigger penises in humans, especially if in prehistory, men didn’t do as much to hide their penises in clothes. However, the authors didn’t offer a way to test this idea beyond these attractiveness ratings.

Of course, the study used a limited sample of pretty specific women. And, not to worry, it’s unlikely to have any real-world applications. Attraction takes into account myriad characteristics, and is unlikely to be well mirrored in a study with weird, white CGI male figures.

To conduct the study, the biologists created 343 male figures with all possible combinations of height, shoulder-to-hip ratio and penis size within a natural range. (I must note that the figures are kind of creepy-looking, although I understand they were created to keep other traits, such as skin color and facial attractiveness, constant.) The biologists then asked women who volunteered for their study to view a random sampling of 53 of the figures and to rate the figures’ attractiveness. Statistical analyses of the women’s answers yielded such gems as:

The biologists published their work today in the journal Proceedings of the National Academy of Sciences.