The frog that laid the golden egg. 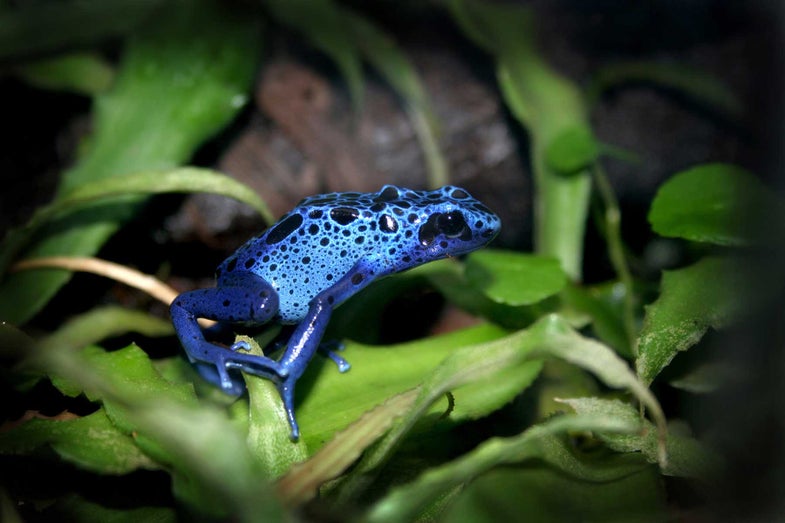 It began, as these things often do, with a mystery.

The National Zoo’s collection of poison dart frogs, a group of amphibians native to tropical Central and South America known for their dazzling coloration, were dying. The young larvae perished just as they transformed from wriggling tadpoles to adult frogs. It can take a while for people to even notice when animals start dying off in the wild, but in a zoo there are pathologists—disease scientists—tasked with understanding the cause. One of those pathologists was Allan Pessier. He suspected that a fungus, that weird kingdom of life that includes both edible mushrooms and athletes’ foot, was the culprit. But to be sure, he needed help.

This was in 1997, a year before Google launched, when the World Wide Web was still stitched together by a patchwork quilt of search engines—Excite, AskJeeves, AltaVista. But somehow, Pessier found his way through the tubes to the website of Melvin Fuller, a retired mycologist formerly of the University of Georgia. Pessier and his zoo colleagues sent Fuller some electron microscope photos of the pathogen killing their frogs. Then Fuller sent them to Joyce Longcore, an Associate Research Professor in Biology at the University of Maine with whom he’d informally collaborated in the past. It was a serendipitous connection: Longcore immediately identified the specimen as belonging to a group of fungi called Chytridiomycota (chytrid for short) that she had quietly been studying off and on for the better part of three decades. Pessier had managed to connect to one of just a handful of people with the expertise to identify the killer.

And had things gone just slightly differently, she might not even have been there to come to the rescue.

Longcore began studying chytrids—microscopic fungi that hang out in water in 1960—towards the end of her senior year of college at the University of Michigan. They were not a sexy topic, but curiosity of these critters prompted Longcore to stick with them through her master’s degree at Indiana University, and for a stretch after she got married and relocated to Maryland. All the while, she was doing the sort of classification and observation study that is the bedrock of basic science, and the bane of those who seek immediate returns on scientific investment. There wasn’t any obvious benefit to studying these fungi, beyond increasing our understanding of our world.

When Longcore started to have children, she stopped working. “I belonged to a different era,” she says. “Women were switching from staying at home to going to work. I stayed home, and you know, there was just never any question in my mind about doing otherwise. I wasn’t a person who could manage shuffling kids off to daycare and going to a job. Nor did I want to.”

A couple of decades later, a request came from a researcher in Orono, the Maine college town that Loncore now called home. She’d received an NSF grant to study the function of domestic leach field for sewage, and had been referred to Longcore for assistance.

“She came and convinced me that I still knew more about this group of fungi then she did, and that I could help,” says Longcore. So Longcore went to work in the lab part-time for about six months. But once she was back behind the microscope, she knew it was where she needed to be.

Longcore enrolled in a PhD program. As a master’s student in the 60s, it was the norm to simply draw diagrams of the organisms you studied. As a PhD student in the 80s, Longcore learned all about electron microscopy, which uses a beam of electrons to create an image of a specimen. She learned how to grow fungi in pure culture, and how to photograph and read photographs of specimens. Her time away had opened up a whole new world of possibilities in understanding the tiny organisms that had always fascinated. But when she graduated in 1991, her attempts to get the sort of National Science Foundation grants that fund most scientists’ work failed. With no obvious payoff, work on chytrids wasn’t high on anyone’s priority list.

“I said, ‘to heck with that,'” Longcore says. Instead of wasting her time endlessly applying for NSF grants, she decided to make do with what little money she could get from other sources.

And that’s where she was when she received Pessier’s electron microscope photos in 1997—toiling in an unused corner of someone else’s lab, isolating fungi and publishing papers. The chytrid Pessier had isolated from the zoo’s dying frogs was immediately identifiable to her. “That was really weird, because at the time we did not know of any other fungus from this group that was a pathogen of vertebrates,” she says. “We knew that they could be parasites of algae or invertebrates, but we didn’t have any idea of any of them being a pathogen of an amphibian.”

It turns that that chytrids can and do infect frogs, toads, and salamanders. The pathogen has caused population declines across the globe in every continent but Antarctica (where, it should be noted, there were no frogs to begin with) and has even lead to the extinction of some amphibians. Her work, along with the work of Elaine Lamirande, Don Nichols, and Allan Pessier, helped researchers figure out how the fungus is spread: by boats and equipment moved from one body of water to another, as well as through exotic pet smuggling.

That’s why the work was awarded the American Association for the Advancement of Science’s Golden Goose on Wednesday. The prize traces its lineage to Tennessee Congressman Jim Cooper who, Associate Director of Government Relations at AAAS Erin Heath told Popular Science, “wanted to recognize the tremendous benefits of federally funded research by highlighting examples of seemingly obscure studies that have led to major breakthroughs and similar societal impacts.”

It acts as a sort of rebuttal against what some see as a climate antagonistic to basic research, as embodied in the Golden Fleece award. That satirical honor was developed by William Proxmire, then a Democratic Wisconsin Congressman, to publicly shame projects he perceived as squandering taxpayer money. The award was handed out monthly from 1975 to 1988, and targeted roughly two dozen scientific research endeavors. One 1975 study that Proxmire criticized examined the connection between alcohol and aggression in fish and rats. He dismissed it on the grounds that “the most effective way to understand human conditions and problems is to observe human behavior.”

“I would really enjoy having Proxmire make a proposal to give people alcohol and ask them to fight,” psychobiologist Harman Peek of the University of California, San Francisco, told The Scientist in 1988. “That’s simply unethical and immoral.”

Some blame the Golden Fleece award on a skepticism towards “funny sounding science,” and an increasing push to only invest in scientific advances that have a clear, quickly attainable social benefit.

“I’m all for science funding, because time after time there’s been unexpected returns from science knowledge,” Longcore says. “That’s how things progressed.”

Who, after all, would have thought that a century after Einstein developed his theory of relativity, we would be using it in our GPS devices to chart our morning runs and navigate unfamiliar neighborhoods?

The work of Longcore, Nichols, Pessier, and Lamirande was recognized alongside the work of Lotfi Zadeh, who figured out Fuzzy Logic—a mathematical concept that is now used in everything from HVAC systems to healthcare devices—and Kaiching Li. Li wondered how mussels stick so well to underwater walls and rocks. By understanding their bonding methods, he was to develop a soy-based glue that enabled companies like Columbia Forest Products to move away from ecologically harmful, potentially carcinogenic formaldehyde-based adhesives.

“Curiosity-driven research is important, because it lays the foundation for developments that can change lives. We don’t always know where this research will lead,” says Heath. “We want to hear more stories like these—anyone can make a nomination for the Golden Goose.” Not all basic research will lead to findings as important as Longcore’s did, to be sure. But you never know where scientific inquiry might take you.