Take some Neanderthal DNA, mix in some stem cells, add it to a womb--bam, baby Neanderthal. 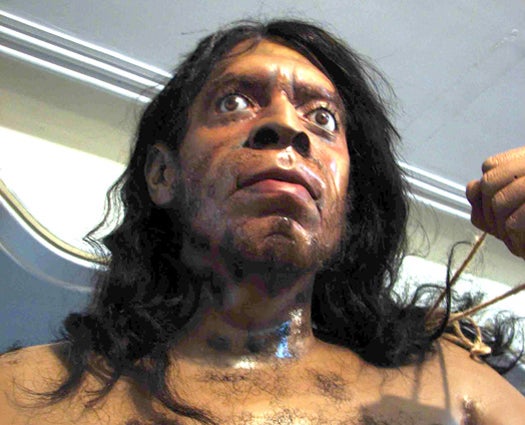 Update: In an interview with the Boston Herald_, George Church says the idea that he was actively seeking someone for the project was a misinterpretation based on his translated_ Der Spiegel_ interview. From the_ Herald_: “I’m certainly not advocating it,” Church said. “I’m saying, if it is technically possible someday, we need to start talking about it today.”

Maybe Neanderthals just get a bad rap. One well-credentialed Harvard scientist, at least, thinks they’re more intelligent than they’re portrayed, and he’s willing test that theory out. He just needs an “adventurous” woman on board as a surrogate for a modern-day Neanderthal.

George Church of Harvard Medical School is a geneticist noted for his work on the Human Genome Project. If Neanderthals were re-introduced to the planet, he says, their way of thinking could be beneficial to Neanderthals and Homo sapiens alike. His plan to create a baby Neanderthal–“neo-Neanderthal,” if you will–goes like this. 1) Make artificial Neanderthal DNA from bone samples. 2) Introduce that DNA into stem cells. 3) Put those stem cells into a human embryo, and the DNA will steer it toward becoming a Neanderthal. 4) Put that embryo in a woman and wait for her to give birth.

Church writes in his latest book, Regenesis: How Synthetic Biology Will Reinvent Nature and Ourselves, that an “extremely adventurous female human” is still needed, but in an interview with Der Spiegel, he said he believes it’s “likely” to happen in his lifetime. From the interview:

That depends on a hell of a lot of things, but I think so. The reason I would consider it a possibility is that a bunch of technologies are developing faster than ever before. In particular, reading and writing DNA is now about a million times faster than seven or eight years ago. Another technology that the de-extinction of a Neanderthal would require is human cloning. We can clone all kinds of mammals, so it’s very likely that we could clone a human. Why shouldn’t we be able to do so?

If you guessed this might be the tiniest bit controversial, you’re right, as The Independent points out. Many countries have banned human cloning–but does this legally qualify as human cloning? Will the neo-Neanderthal be able to survive modern diseases? And if it did, would it be accepted into society? That’s not even getting into the ethical concerns of using a surrogate mother in the procedure.

So will Neanderthals make a comeback soon? Hard to say, maybe, but they’ve been extinct for about 33,000 years now, so they can wait a little longer.