Something seems a little off here… 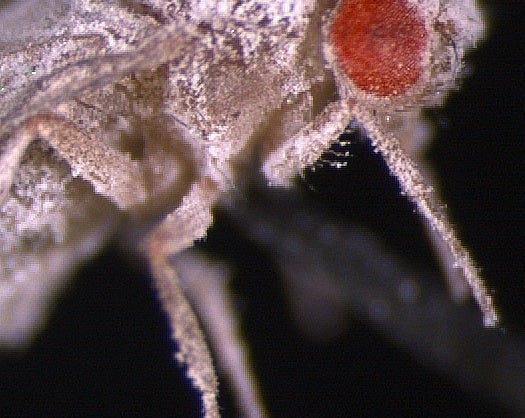 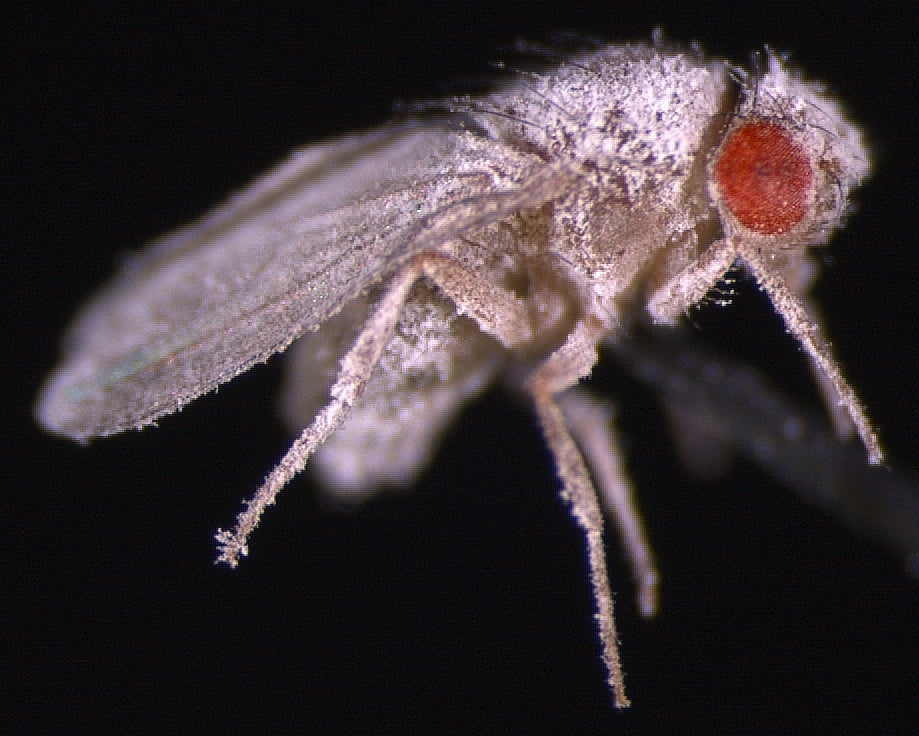 This is a fruit fly, raised in space. Space was not directly what made it furred all over with white, but indirectly it was. The white stuff is fungus, and the fly grew it because after hatching and growing to adulthood in space, it didn’t fight off a fungal infection the way a healthy fly that had grown up on Earth would.

The image comes from the research of a team of biologists from several U.S. institutions. Observations of astronauts and studies done in human immune cells have shown that space weakens the immune system. This U.S. team wanted to learn more about what was happening at a cellular level. Their little spacefaring flies taught them that low gravity shuts off an important component of the fly immune system—one that has a human counterpart.

Their findings gave them some starting ideas about why people also have compromised immunity after spending time in space, they wrote in a paper they published today in the journal PLOS ONE. One experiment they performed in hypergravity—created for the flies using a centrifuge in a lab on Earth—also suggested exposure to gravity could prevent the immune effects of space.

Both the space flies and the Earth flies were born with the same genes, but exactly which of those genes turned on and went to work differed between them.

The team sent fruit fly eggs to space aboard the space shuttle Discovery. (Fun fact: These were the first flies to go into space in the name of immunology.) The eggs spent 12 days in space, during which time they hatched, crawled around a bit as larva, and became adult flies. Then they came back down to Earth, where biologists infected them with one of two things, either E. coli bacteria or a fungus called Beauveria bassiana. (I survived space and all I got was a fungal infection.)

The space flies’ immune system fought off the E. coli, but not the Beauveria bassiana fungus. Meanwhile, similar control flies raised on Earth fought off both infections.

To figure out why the space flies had trouble with the fungus, the scientists analyzed all of the flies’ genes. Both the space flies and the Earth flies were born with the same genes, but exactly which of those genes turned on and went to work differed between them. In Earth flies, the genes associated with their immune systems kicked into high gear after they got infected with the fungus. Among other genes, Earth flies activated something called the Toll signaling pathway, which scientists have long known flies use to fight off fungi. Humans have Toll-like genes, too, and they also work in immunity.

The space flies reacted differently from their stay-at-home siblings. They turned on some immunity genes after encountering Beauveria bassiana, so it’s not like they were totally helpless. But they didn’t use all of the genes the Earth flies used, and they didn’t turn up their Toll pathway genes. In their paper, the biologists called their spacefaring flies “severely immunocompromised.”

Strangely, when the biologists raised flies in a centrifuge to simulate higher-than-Earth gravity, they were more likely to survive a fungal infection than normal Earth flies.

The science team offered some hypotheses about what could be happening that would alter what genes flies activate, depending on the gravity they’re exposed to. The hypotheses are testable, the team noted, although the team didn’t do that for this paper. The next step should be to send fruit flies to the International Space Station, the biologists wrote, where the little bugs can spend longer in space.