Why Do Some People Faint When They See Blood?

It's a phobia, but other phobias don't give you that same woozy feeling. 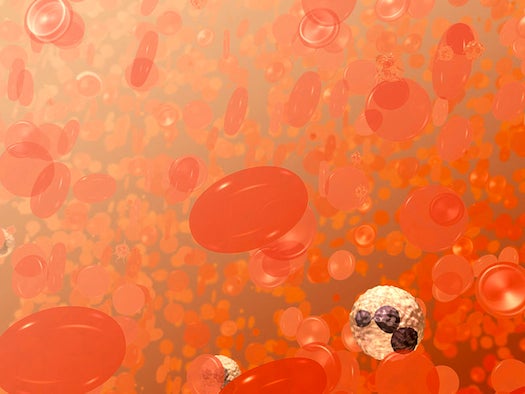 Getting dizzy and fainting at the sight of someone else’s blood doesn’t seem to be the most, uh, evolutionarily appropriate response. How’s that going to help you when you’re trying to take down a buffalo? And despite it being relatively common–3 to 4 percent of people suffer from blood phobia or a related disorder–the symptoms of it are totally different from most phobias: phobics’ blood pressure and heart rate will rise then drop when they see blood, as opposed to the just-heart-racing caused by most fears. So what gives?

John Sanford at Stanford Medicine has a great (and personal) breakdown. Here’s what that fainting/nausea/dizziness response is:

This is a vasovagal response. The vagus nerve, a component of the parasympathetic nervous system, meanders from the brain stem through the neck, chest and abdomen. It helps to control involuntary “rest and digest” functions, such as lowering heart rate and promoting the secretion of gastric juices. But when it overreacts — in response to hunger, dehydration, standing up quickly, standing too long, intense laughter, sudden fright, severe coughing, pain, vomiting and, of course blood, among other triggers — it causes a vasovagal response, which does not generally occur with other phobias.

Turns out, there are a few theories on why we might respond like this, from it being a way of “playing dead” in dangerous situations to low blood pressure keeping you from bleeding out after you’ve been cut. (There appears to be some kind of hereditary relationship with the phobia, so there’s at least some reason to put stock in that theory.)

As Sanford found out, there are specialists dedicated to ridding people of their phobias. By clenching their muscles while being systematically exposed to stimuli, phobics can learn to handle the symptoms. Doctors have phobics tense up, and slowly expose them to more and more realistic versions of blood–first a dot, then a red dot, then a photo of blood, etc.–until the phobics are looking directly at blood without fainting. The exposure technique is used for treatment of other fears like, say, arachnophobia, but the tensing specifically counter-acts the drop in blood pressure caused by blood phobia and similar disorders. It’s proven to be a surprisingly quick and effective treatment for the phobia.

Good news if you’re looking to donate blood (or hunt buffalo without passing out).