BeerSci: How To Drink Your Thanksgiving Meal 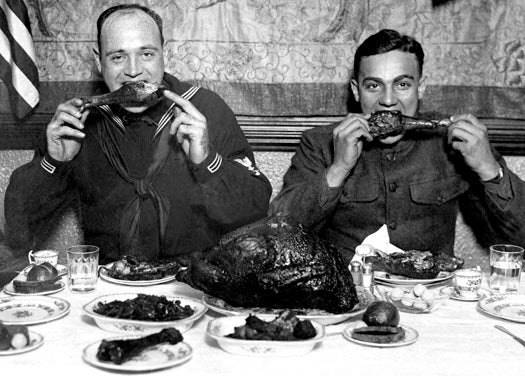 The most famous Thanksgiving food is also the most filling one. To eat as much as possible, save it for the end of your meal. Wikipedia
SHARE

Ah, Thanksgiving. That gluttonous annual tribute to post-colonial greed. To celebrate, many of us are going to be drinking beer — a lot of it — before, during and after the main event. This helps one tolerate one’s insane relatives and of course there are games to be watched — NFL and NCAA football and, for those of a more international bent, the second Australia-South Africa Test will be in its second day. (Yes, Team BeerSci likes Test cricket. Don’t judge.)

But when discussing beers appropriate for Thanksgiving with the PopSci.com editorial team, we hit upon a better idea. Drink Your Turkey-Day Dinner. It sounds implausible — and it’s certainly not advisable — but it is possible to have a traditional Thanksgiving Day dinner in beer form. Pumpkin pie and cranberry sauce are two very obvious dishes that have clear beer counterparts: google “pumpkin ale” or “cranberry beer” and you’ll find a large array of commercially available beers such as Southern Tier’s Pumking and Sam Adams’ Cranberry Lambic.

But what about the poultry? Or stuffing? Or green-bean casserole? Well, for those you’ll have to be creative.

(sort of)
To get the obvious question out of the way: Yes, there is an extant recipe for “cock ale.” It has shown up in different homebrew books, was mentioned in the diaries of Samuel Pepys and was included in the first cookbook published in the then-colonies,The Compleat Housewife from 1727.

Take 10 gallons of ale and a large cock, the older the better; parboil the cock, flay him, and stamp him in a stone mortar until his bones are broken (you must gut him when you flay him). Then, put the cock into two quarts of sack, and put to it five pounds of raisins of the sun – stoned; some blades of mace, and a few cloves. Put all these into a canvas bag, and a little before you find the ale has been working, put the bag and ale together in vessel. In a week or nine days bottle it up, fill the bottle just above the neck and give it the same time to ripen as other ale.

Basically, you’re dry-hopping your beer with a gutted, flayed, boiled smashed capon that has been soaked in sherry, and then adding some raisins and spices. Yum! The entire recipe is on the next page. 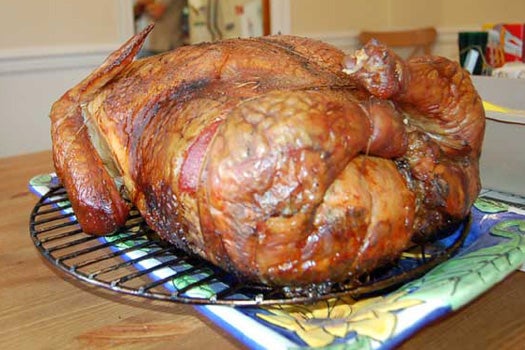 Once you have mastered the art of cock ale, move on to turducken ale.

Beer is, as the saying goes, “liquid bread,” so making a stuffing beer means putting the herbs into beer. Digging around the internet, I found recipes for garlic beer and I found at least one brewery, The Maui Brewing Company, who makes an Onion Mild for the annual Maui Onion Festival. Reading more into the onion beer, it looks like the brewers take sweet Maui onions and caramelize them (or otherwise bring on the Maillard reaction), then add those to the boil and at flameout. Be sure to add some fresh thyme and oregano at flameout as well to get an herby character in there. You can use the recipe for the Marathon Mild as your base.

In New England, having creamed pearl onion side dish is customary, so we came up with an Onion Cream Ale recipe.
Cream ales are an indigenous American style of beer: light, typically brewed with American six-row barley and a corn adjunct. Cream ales are fermented cool or cold, using a neutral ale yeast strain (you don’t want too many esters). The most well-known example of this style is probably Genesee Cream Ale from upstate New York.

Awhile ago, I had an excellent cherry stout made by Bell’s Brewery. It had enough roast character to offset the cloying sweetness that most non-lambic fruit beers (and especially most American fruit beers) suffer from, but one could still catch a definite cherry character to the brew. Because of this, I think that a Cranberry Stout would be an excellent way to get cranberries in. I found an interesting recipe for a cranberry stout, but really all you need to do is brew a stout and throw some sanitized cranberries into the secondary.

Recipes I’ve seen use pureed canned sweet potato and a period of caramelization in the oven before putting it in the mash tun with your grains. Really, as long as you convert the starches in the tuber into fermentable sugars, you’ll be fine. Or steam ’em (this pasteurizes the sweet potato) and put them in the secondary.

Some pumpkin ales are just a regular ale with pumpkin pie spices. Others use pureed pumpkin at various points of the brewing process (usually in the mash or boil). There are many, many recipes out there for this style of beer. For those who love lagers, I’ve found a few examples of pumpkin lager out there as well.

Sorry folks. You are on your own.

If you have suggestions for any of the beer varieties listed — especially commercial varieties, but also brewing tips — add them in the comments. Team BeerSci will be posting increasingly surly updates to the Twitter feed on Thanksgiving, so if you’re bored, hit us up there @BeerSci!

If you want to see sample recipes for the above beers, click on through to page two!

Take ten gallons of ale, and a large cock, the older the better; parboil the cock, flay him, and stamp him in a stone mortar till his bones are broken (you must craw and gut him when you flay him); then put the cock into two quarts of sack, and put it to three pounds of raisins of the sun stoned, some blades of mace, and a few cloves; put all these into a canvas bag, and a little before you find the ale has done working, put the ale and bag together into a vessel; in a week or nine days time bottle it up; fill the bottle but just above the neck, and give the same time to ripen as other ale.

According to a couple of sources, including an ancient PRNewswire release, Boston Beer Company once made a version of this recipe back in 1996. Contrary to the above directions, they put the cockerel whole in the boil, not in the fermenter. That’s probably better for keeping out gnarly bacteria, but I can’t imagine that the beer would have much chicken character after that.

**To either of the following recipes, add caramelized onions in the boil and at flameout. Unfortunately, I never heard back from Maui Brewing Company about what the ratio of grain to onions is. You’ll want to use a sweeter variety, such as Vidalia or Maui, if you can get them.

Chill, aerate and pitch yeast (Activator smack pack)
Add 1.6kg (3.5lbs) of sanitized cranberries in primairy bucket when primairy fermentation is done (after 5 days in my case). Let the fruits ferment for a few weeks (~3) then rack to secondary. Let mature and mellow a bit for 3-4 weeks.

Puree the sweet potatoes with liquid from the can
along with 1.00 teaspoon pumpkin pie spice. Bake for
25 minutes at 400F or until lightly caramelized.

Steep grains and sweet potato puree (in nylon bag)
with 2.5 gallons water at 150F for 30 minutes. Remove
grains and sparge with one gallon 150F water.

Primary ferment for seven days at 68F. Rack to secondary
with vanilla and spices. Ferment to completion.