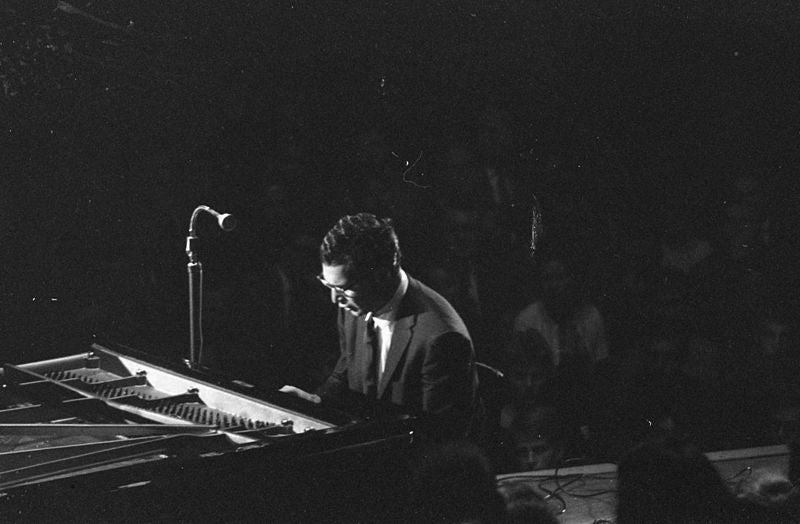 I saw Dave Brubeck play, once. That’s not that unusual; he performed pretty much right up until he died, earlier today, the day before his 92nd birthday. I was in high school, playing piano, trying to figure out what I wanted out of the instrument. I had been classically trained, and got tired of the constraints, of the tamped emotion, the lack of freedom. I had a year or so of jazz training, but I didn’t much like playing standards, and I didn’t like playing with other jazz kids, who in high school tend to play anonymous and masturbatory jazz-funk, almost exclusively. Pop music was what I loved, but the piano parts were all boring.

Brubeck was the first pianist I ever heard that really put it all together. He was a songwriter, not an improviser, though of course he was an outrageously skilled improviser. His music was catchy, not showy; he wasn’t interested in absurd runs like Art Tatum or Oscar Peterson, and wasn’t interested in intellectually interesting but perhaps not as enjoyable music like that of the restless Chick Corea. His songs managed to be classics without being classical: they were innovative in small ways, in time signature and rhythm. He had a pop sensibility, jazz chops, and a classical soul.

And that lost him some prestige in the jazz community. I don’t know that Brubeck has ever been “cool,” though he’s one of the most successful jazz composers of all time. There are maybe five jazz songs from his peak era (late 1950s to late 1960s) that became so successful that non-jazz fans would recognize them, and Brubeck probably wrote four of them. “Take Five” and “Blue Rondo a la Turk” are almost pop classics, so ubiquitous that it’s easy to forget how ballsy they were in 1959.

Brubeck was 85 when I saw him. He played with his two sons (one on drums, one alternating bass and trombone) at a huge old colonial church in my Pennsylvania hometown, around Christmastime, which is a very good time to listen to Brubeck. My friend–a drummer with significantly more talent at his instrument than I had at mine–and I were the youngest in the church by decades. Brubeck walked slowly out to the piano before the show. He was an old man, hunched over, wearing a black suit, white shirt, black tie. It took forever for him to get from the side of the stage to the piano in its center. But then he sat down, and he started playing, and it was Brubeck. He hadn’t lost a thing; his music was never about physical strength and dexterity, but about precision, and creativity, and songwriting. His innovations in jazz were all under the surface, in the mathematical creativity and precision of his time signatures and rhythmic gestures. And his play that day was strong and sure. He was better in the last decade of his life than I’d ever be, better than anyone I knew would ever be.

I shook his hand after the show. He was very nice, I was very nervous. I remember I couldn’t think of anything smart to say; I was trying to say a cool-jazz-dude thing about his voicings or his tonality and nothing was coming. But he was nice, and his son chatted with my friend, and I listened to his music for weeks, nonstop, after that. And I’ll do the same now, after he’s gone.