BeerSci: How To Brew A Beer For Surviving A Marathon, The Holidays Or Anything, Really

Our trusty BeerScientist introduces a recipe for the Mild Marathon ale, using some of the year's most plentiful hops. 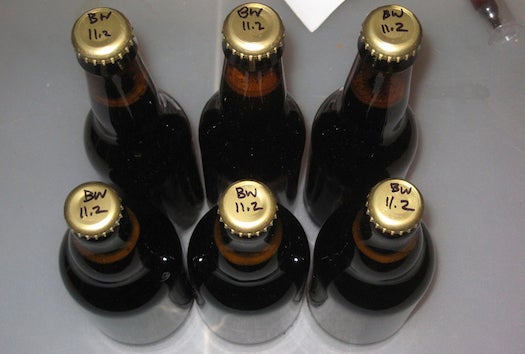 A “mild” is a type of ale first produced in the 1700s in England. The term “mild” originated to mean a young beer (meant to be drunk fresh), as opposed to a beer that you could age for a while in the barrel. A modern mild has a strong malt character, is dark(er) in color and generally clocks in under 4% alcohol by volume (ABV), which means it’s a session beer, something you can drink a few of in a sitting without getting completely hammered.

My spouse Doug and I brewed the Marathon Mild just before Doug ran his debut marathon last November. Coincidentally, it was our 26th batch of beer (a marathon is 26.2 miles), and as Doug slogged through the streets of New York City, it sat in our bedroom closet, happily fermenting away. It was something of a pity that the Marathon Mild wasn’t ready to drink right after the marathon, but Doug made do drinking beers from earlier batches (if I recall correctly, a juniper pale ale, a black saison and a dry-hopped regular saison) while he iced his knees. We drank the 5-gallon batch of Marathon Mild over Thanksgiving with family. 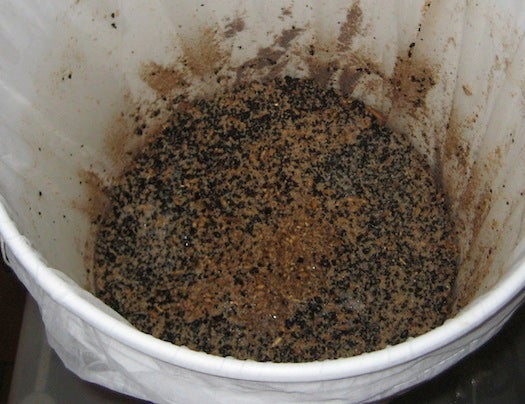 After mashing and draining off of the sugar-laden wort, brewers are left with “spent” grains.

So why am I sharing Marathon Mild with you today? Because Doug just completed his second marathon (Chicago), Thanksgiving is around the bend, and if you’re not interested in the former, at least the latter will make you want to drink.

There is one more reason: Right now is hop-harvest season and the Centennial hop, a core ingredient in Marathon Mild, is big this year. In Washington, production of Centennial hops is expected to double (641 acres to 1,365), according to the USDA. (The official harvest numbers of all of your favorite hop varietals won’t be published until December, but you can get the data on acres planted from the USDA fact sheet.) Centennial is such a great all-around hop, and I’m happy to see increased production because it means that 1.) we’re likely to be able to get it regularly, unlike perennially sold-out Simcoe and 2.) it means that more professional brewers are using it. I’ve found that my enjoyment of certain beers is directly related to the hop variety used. There are some hop varietals, such as Cluster, whose organoleptic properties I just cannot abide.

Depending on a variety of factors, Doug and I mix up our brewing between all-grain and partial-mash. “All-grain” means exactly that: all of the sugar comes from kernels of barley that we have to process ourselves. “Partial-mash” means that some of our sugar comes from kernels of barley, and some of it comes as malt extract (that means that someone else has processed the kernels for us and concentrated all of the malt sugars into a syrup). It’s possible to brew with just extract, and novice homebrewers should start with that–mashing is a finicky process best helped along by drinking a bottle of already-made homebrew. More-experienced homebrewers like the versatility of choosing exactly which grains go in their beer. That said, there are plenty of experienced homebrewers who stick with extract brewing because it’s easy to brew consistently good beers with it. 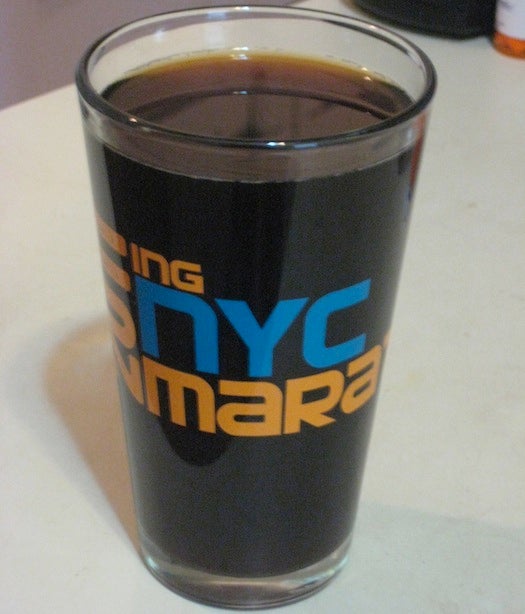 Our Marathon Mild in its namesake official marathon pint glass.

This mild recipe is all grain and is based on a recipe for a JW Lees Best Mild from 1952. Doug and I brewed the 1952 recipe a year earlier, and wanted to play with the proportions a bit. I left out the invert sugar and the black malt thinking that I might get more malt character and a little less roast character–I wasn’t looking for a dark, coffee-like flavor in the palate. I used Centennial hops because that is what we had on hand, though any relatively clean bittering hop will do. Aim for 14 IBU.

3. Boiled with Centennial hops for 60 minutes. No aroma hops. Pretty sure we used Whirlfloc.

As an aside, Doug and I typically use BeerSmith when creating recipes.

To the neophyte homebrewers, I am sure that some of the stuff I just posted is obscure gobbledygook. For those who are just starting or who want to keep up on the homebrewing side, I recommend two books. The first is the classic Joy of Homebrewing by Charlie Papazian. The second is How to Brew by John Palmer. I especially recommend this second one for those who are science-minded. I appreciate Papazian because he takes a lighthearted approach to the hobby and, let’s face it, we all need some levity in our lives. But Palmer’s book is all about grokking brewing on a more mechanistic level, which is what this column is going to be all about. The entire book is available as hyperlinked chapters online, but I found it most useful as a physical object to read in my spare time.

Next week on BeerSci: I fall down the rabbit hole researching the S. cerevisiae genome.

P.S. Follow me on Twitter! @BeerSci will feature beer-related mutterings, brew reviews and embarrassing photos, all in 140 characters or less.