Strong enough to see through skin, but not to cause harm 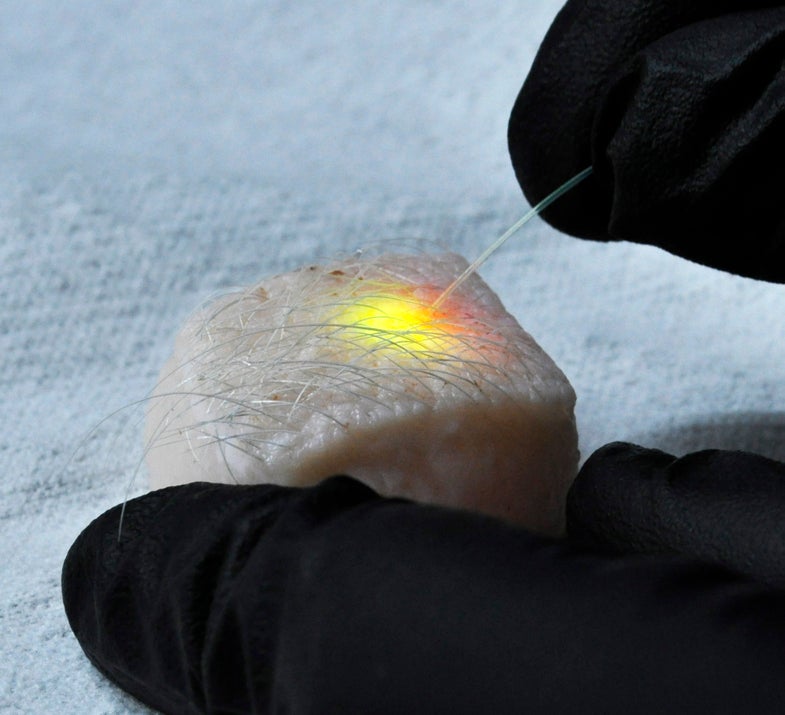 In the past few months we’ve seen laser internet in the sky and laser-generated holograms, but now lasers are going where they’ve never gone before: inside us.

The medical field has been using lasers externally for years in refractive eye surgery and to remove tissue. This helps surgeons accomplish more complex tasks while reducing discomfort and infection, according to the FDA. Now, researchers at Harvard Medical school have devised a method to actually create lasers internally, within cells themselves. While they’re not strong enough to burn away tissue or correct eyesight, these little internal pulses of energy could be used to target cancer cells or deliver medicine directly to infected tissue.

Seok Hyun Yun, a co-author of the study, says you need three things to build a laser: a pump that makes the light, a resonator or cavity that traps the light, and a gain medium that amplifies light to a specific wavelength.

By injecting a tiny microresonator (which could be a natural fat, oil, or polystyrene bead) and sometimes a dye within the cell to serve as the gain medium, the Harvard team was able make the cell emit laser light, in nanosecond bursts, when stimulated with an outside pump light.

Using this technique in various assortments, and using components already in cells like fat, the researchers were able to create microlasers within the polystyrene beads, on the surface of the beads, and in the fluid of the cells themselves. The amount of energy put out by the microlasers is measured in the nanojoules and even if many were set off at the same time, they wouldn’t be able to cause harm, says Yun. The microlasers’ light exists on a very specific spectrum, with wavelengths around 400-450 nanometers. Because of their specific and distinct wavelengths, these lasers are far easier to distinguish than other forms of bioluminescence, making the laser-lit cells easily distinguishable on scans and even through skin.

Yun says the microlasers have great potential for cell labeling and drug delivery. In the future, they could be used to trigger a targeted, light-activated drug in a specific part of the body. Individual cells can also be tagged by altering fluorescent polystyrene beads, meaning there’s almost an infinite amount of tags that can be applied within the body. Tests have only been conducted in pig skin so far, but the researchers see this study as a small step down a long road to viable internal laser technology.