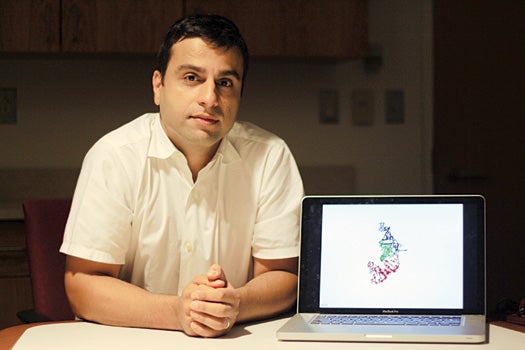 Early every morning, before dawn if he can, Hashim Al-Hashimi goes running. Six miles, rain or shine, summer heat or bitter Michigan cold (Al-Hashimi works at the University of Michigan). His chosen route is hilly for a reason. Just at the uphill crests—when the muscle pain is sharpest and the body most wants to quit—that’s when his mind is sharpest. “Most of my thinking is at the top of a hill,” he says.

It was one such push that led to his biggest innovation in molecular visualization. Using a computer algorithm he developed and nuclear magnetic resonance imaging, Al-Hashimi recorded the atomic-scale contortions of RNA and DNA, long thought of in biology as relatively inflexible structures. Instead of holding one predominant form, Al-Hashimi found, RNA bends and wiggles into a predictable series of shapes as its atoms rotate around their bonds. Each shape is a potential target for RNA-attacking drugs. Using this new method, Al-Hashimi has already identified one molecule, called netilmicin, that can stop HIV replication by latching onto RNA where one of the virus’s essential proteins otherwise would.

Al-Hashimi himself has always been in motion. He was born in Lebanon just before its civil war, and his family escaped to Greece soon thereafter. They then lived in Italy, Jordan, Wales and England. Soon after he started his Ph.D. at Yale, a labmate visualized a protein called myoglobin and couldn’t fit it to any single 3-D configuration. To Al-Hashimi, it seemed obvious that the protein was moving—everything in biology moves—but at the time, most biologists did not realize the extent to which biological macromolecules were moving. He realized then that revealing molecular motion would be his focus.

He’s now lived in Ann Arbor for nine years, longer than anywhere else, advising the scientists at his biotech start-up, Nymirum, and trying to view larger areas of DNA molecules. He says that being settled is somewhat strange, but he still runs every morning. It’s best if it’s still dark out. “Then there’s nothing to look at,” he says. “It’s just you and your brain.”