The Virus Station: A Field Lab for Finding a Deadly Disease

To catch a fast-acting virus, response teams have to be faster 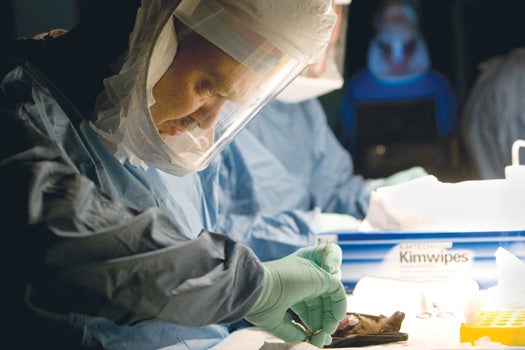 A man who worked in a lead and gold mine in southwest Uganda died suddenly from a hemorrhagic fever. Concerned that it could be the beginning of an outbreak of Marburg virus, which is similar to Ebola, doctors sent a blood sample to the Uganda Virus Research Institute, where pathologists confirmed that Marburg was indeed the cause of death and alerted the World Health Organization and the Centers for Disease Control and Prevention. Both the WHO and the CDC are tasked with containing the spread of virulent diseases. If scientists could locate the animal that transmitted the virus to the miner, they could stop an outbreak.

Two days later, in Atlanta, a team of eight scientists from the Viral Special Pathogens Branch of the CDC loaded respirators and Tyvek suits, liquid nitrogen tanks, folding tables, a generator and five gallons of Lysol into the belly of a 747. They flew to Entebbe, outside Kampala, Uganda’s capital, and drove 200 miles to Ibanda village. Just outside the village, the group reached the mine, where they expected to find the animal host.

Bats, and their guano, were everywhere. The scientists donned their suits and respirators and entered, using nets to capture 800 bats before heading back to Ibanda, where the rest of the team had constructed a lab inside the village’s hospital. Then they euthanized the bats. 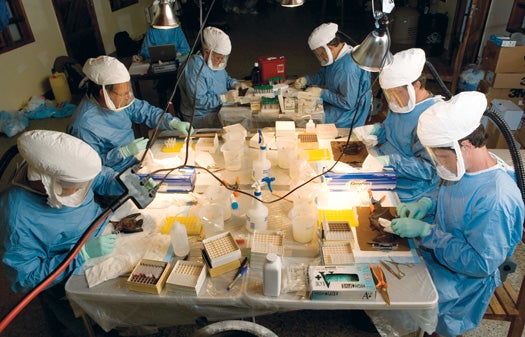 RAPID RESPONSE The Viral Special Pathogens Branch of the Centers for Disease Control and the World Health Organization use portable field labs to dissect fruit bats.

The team went to work dissecting in an assembly line. One group collected tissue samples from the bats’ kidneys, livers, lungs and hearts; another took blood samples; another entered data. They put the samples in tubes, put the tubes in women’s stockings (which fit snugly around the samples), and dipped the packages into tanks of liquid nitrogen, where they were stored for transit. A scientist returned to Entebbe with the frozen tubes.

Within a week of the call, the samples reached Atlanta and the CDC’s high-containment labs, where scientists hunted for signs of Marburg. “If we can know how a population with the disease acts, how it might impair them, we can get a jump on it,” says Craig Manning, a member of the CDC team. With the samples, they could begin to understand how the disease manifested itself in one species and jumped to another.

They discovered that 23 of the 800 bats carried Marburg, although they couldn’t find evidence of symptoms. Back in Uganda, the mine was shut down and the virus’s only victim buried.