Attentive followers of dentistry developments that we are, we’ve been following the story of the plasma brush for awhile now.... 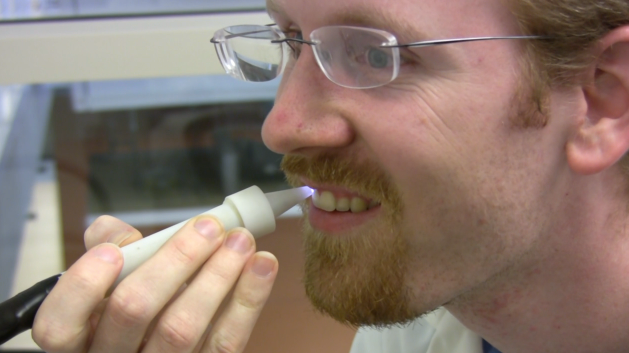 Attentive followers of dentistry developments that we are, we’ve been following the story of the plasma brush for awhile now. And it seems like it’s making some serious progress: human clinical trials are supposed to begin in early 2012, and there’s also a video (below) of the World’s Bravest Dentist shooting a plasma beam into his own mouth.

Some background, for anyone who doesn’t subscribe to Dentistry Illustrated Weekly: the plasma brush isn’t a toothbrush, but actually a tool dentists are hoping to use for two primary situations. The first is breaking up plaque; the plasma torch, though it’s no hotter than room temperature, is excellent at breaking the bonds that adhere plaque to a tooth. The second is as a sort of primer for filling cavities.

There are certain kinds of cavities, according to Hao Li, associate professor of mechanical and aerospace engineering in the University of Missouri College of Engineering, that need to be refilled every five or seven years using current technology–and they can only be refilled a few times before having to be pulled. The plasma brush can prime a cavity for filling in sort of the same way pavers create those divots in roads before filling them in with new asphalt: it provides more surface area for the filling to stick to, and the research team claims plasma-assisted fillings could be 60% stronger than traditional fillings.

Human clinical trials are due to begin early next year at the University of Tennessee at Memphis, with the team hoping the tool could be approved by the FDA and available to dentists by 2013.