A New Moratorium on Research Into Engineered Avian Flu: What It Means for Science

Is some research so dangerous it shouldn't be done at all? In an unusual move, an international coalition of flu researchers agreed last week to a hiatus on work surrounding a highly contagious, mammal-adapted version of the avian influenza virus. Research on transmissible H5N1 flu will halt, and two manuscripts describing how to modify the virus won’t be published, at least not yet.

The voluntary pause came a few weeks after an American advisory panel recommended censoring the research in the name of security. So it raises an interesting question — is some research just too dangerous to pursue?

Not just for the scientists conducting it, but for the public in a post-9/11 world?

Voluntarily pausing science in the name of safety and public solace is certainly not common, but then neither is a potentially groundbreaking study into the mechanisms that could make bird flu more potent and more deadly. The decision, announced in Science and Nature, indicates influenza researchers want to quell public fears, but they also don’t want to censor their work.

Dr. Nancy Cox, chief of the Influenza Division at the Centers for Disease Control, said flu researchers will confer during the hiatus about how to proceed, including making modifications to security procedures or the biosafety requirements for labs doing this work. Flu is dangerous, but it’s not nearly as deadly as some of the other pathogens CDC studies, she noted.

“If you think of Ebola and Marburg, and some other pathogens with a high lethality, which are worked on in the lab and for which there aren’t antivirals and there aren’t vaccines, influenza falls into a little bit different category,” she said.

One of the two main labs at the center of this debate does not have a Biosafety Level 4 facility, the highest security level reserved for the most deadly pathogens. Issues like that will be a topic of discussion during the 60-day break.

“(The hiatus) is unusual, but because there was so much concern about the work, it was an appropriate action on the part of the laboratories that are involved in this type of research,” Cox said. 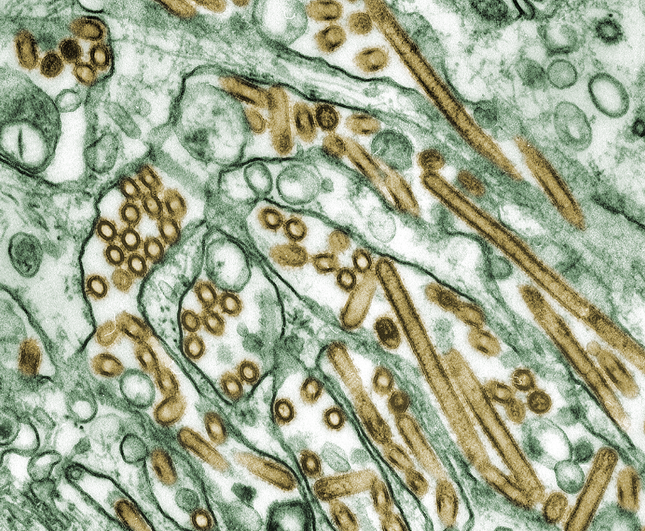 It does have some precedent, however, in a 1975 conference in which scientists agreed to pause research on recombinant DNA. That meeting, known as the Asilomar Conference, was organized to quell public concern, but also to allow scientists to agree among themselves about how best to proceed. At the time, recombinant DNA technology — the process of taking DNA from one organism, and recombining it with DNA from another — was still brand-new and researchers were still uncertain about the risks.

“There are always concerns about misuse of the products of research,” said Jeffrey Kahn, deputy director of the Berman Institute of Bioethics at Johns Hopkins University. “Think about nanotechnology as another example, or genetically modified food. We like the benefits of these new technologies, but we always worry about he misuse, the misapplication, or the unintended consequences. The trick is, how do we oversee and prevent problematic outcomes, while still realizing the benefits of the technology?”

The flu moratorium stems from two separate studies prepared by scientists in the U.S. and the Netherlands (the latter having been funded by the U.S. National Institutes of Health) investigating how the avian influenza virus could mutate and become transmissible among mammals, including us. The main paper is by virologist Ron Fouchier of Erasmus Medical Centre in Rotterdam, the Netherlands, who engineered the genome of H5N1 to make a version that easily spreads among ferrets, the closest animal model of the human response to flu. After 10 virus generations, the mutated virus became airborne, infecting healthy ferrets who were housed near a sick one. The work was important because it disproves a previous assumption that avian flu could not easily adapt to mammals, requiring drastic changes to the virus’ genetic makeup that would render it unable to reproduce.

In a manuscript prepared last year, Fouchier describes his methods and processes, hoping to shed light on the ways in which the virus could mutate naturally. A separate paper by virologist Yoshihiro Kawaoka at the University of Wisconsin-Madison and the University of Tokyo had similar results. The papers could help virologists look for vaccines or antiviral treatments. But some observers fear the work could create an extremely potent bioweapon, should the mutated virus escape from the lab — or should the work be replicated by someone with ill intentions. Interestingly, the moratorium letter (online here) does not address the latter concern, focusing instead on lab procedures.

“We would like to assure the public that these experiments have been conducted with appropriate regulatory oversight in secure containment facilities by highly trained and responsible personnel to minimize any risk of accidental release,” the letter reads.

The Asilomar Conference also led to a hiatus and had similar goals, as scientists sought to regulate themselves before government bodies did it for them. Researchers were able to shape their own rules, so when the National Institutes of Health did create an oversight committee, scientists thought it was legitimate, recalled Alexander Capron, a professor at the University of Southern California and co-director of the Pacific Center for Health Policy and Ethics. Capron was a participant at Asilomar and sees several parallels between that meeting and the flu debate, he said. Along with mitigating physical risks in the lab, scientists need to balance the risks of publishing their research with the risks of not publishing it, and the precedent that would set.

But no one really wants that, said Kahn, who noted the public health value of understanding how H5N1 works.

“It’s really important to know that for the purpose of planning and preparedness, but it has all these potential risks associated with it,” he said. “If there weren’t any good scientific reason to do it, or good policy, we’d say, ‘It’s just mad scientist stuff.’ But it isn’t.”

Most researchers agree that after the moratorium, the work must go on.

“Understanding why some animal viruses jump into humans, and can be transmitted from human to human and others don’t, is one of the central questions we are trying to understand in the field of influenza,” said Cox, the CDC scientist. “There are probably multiple different pathways. Influenza is a very simple organism, but it’s also very complex in that it mutates very quickly, and with all those mutations come a danger. It’s a pathogen that really keeps those who study it on their toes.”