Tissue engineering and tissue healing have a common complication — it’s difficult to build new blood vessels throughout the rebuilt... 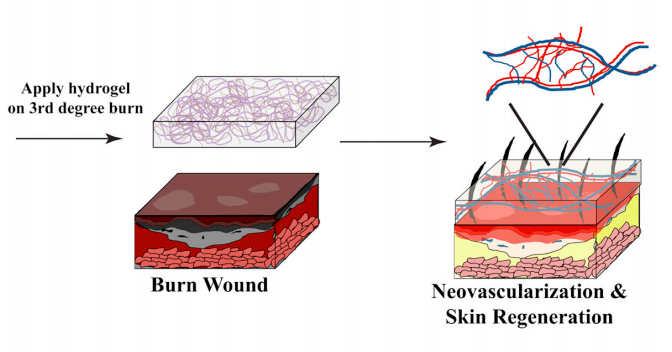 Tissue engineering and tissue healing have a common complication — it’s difficult to build new blood vessels throughout the rebuilt skin, but vasculature is required to keep the skin alive. This is especially problematic for victims of severe burns. A new customized sugary gel substance can work wonders to re-grow skin and the associated blood vessels, according to researchers at Johns Hopkins University.

The method involves a specially designed hydrogel, a water-based polymer. This one is made of mostly water with dissolved dextran, a type of sugar, and polyethlyene glycol (a common substance found in everything from antifreeze to laxatives).

We have seen hydrogels used before in creating artificial skin — last winter, Rice University researchers used a PEG hydrogel, doped with human growth factors and platelets, to induce the growth of artificial vessels. But this new one is interesting because the researchers didn’t add anything — no growth factors or anything else. This particular hydrogel’s physical structure apparently rendered that unnecessary. The researchers aren’t even certain how this happened.

Sharon Gerecht, an assistant professor of chemical and biomolecular engineering, and her postdoc Guoming Sun set out to use their hydrogel as a wound dressing for severe burns. An artificial skin dressing offers greater protection against infection and promotes healing better than other types of wound coverings, they say in their paper, published in this week’s edition of the Proceedings of the National Academy of Sciences.

In a study involving mice, the researchers removed badly burned skin from the center of a burn wound, and covered this opening with the hydrogel. As a control, they covered some wounds with a material derived from cow collagen, which is currently used to treat human burn victims at the Hopkins Burn Center. The other wounds were left alone with just the hydrogel.

After three weeks, the hydrogel worked even better than the control, the researchers say. This was a surprise, so the team worked out a supplementary study to determine why the hydrogel breaks down so readily and how the animals’ bodies were able to use it to generate new dermal tissue. It turns out that the body’s natural inflammatory response — involving neutrophils and macrophages — accumulated easily inside the hydrogel. Its physical structure enabled their easy entry, which promoted the breakdown of the hydrogel and enabling blood vessels to fill it in. Gerecht also believes the hydrogel might recruit bone marrow stem cells, which are naturally induced to differentiate into skin and blood vessel cells.

This is good news, because the faster this process happens, the less chance there is for scarring, Gerecht said in a Hopkins news release.

“Our study clearly demonstrates that dextran hydrogel alone, without the addition of growth factors or cytokines, promotes rapid [vessel growth] and complete skin regeneration, thus holding great potential to serve as a unique device for superior treatment of dermal wounds in clinical applications,” they write.