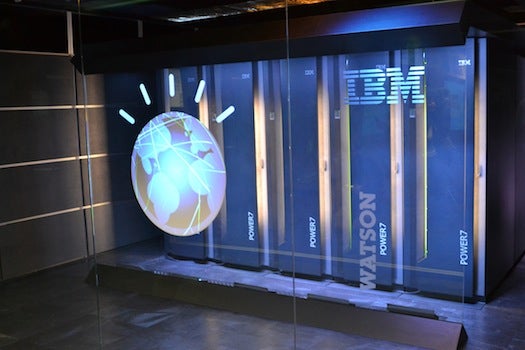 When Watson was competing on Jeopardy!, its massive databanks were filled with encyclopedias, novels, film scripts, and history books. These days, Watson is more into medical journals and misspelled Yahoo Answers blog posts about weird rashes and vague abdominal pains. Watson is maturing, and prepping for his first non-trivia, real-world application: medical diagnoses. He’s all *sniff* grown up!

We’ve known medicine was to be the next step for Watson for some time, but just recently, IBM gave a short demonstration of Watson’s progress. Watson isn’t the first attempt at an automated diagnosis program–we documented Artemis, and Isabel has been around for a few years–but Watson’s incredible power, depth of knowledge, and ability to understand natural human language puts it in a totally different league. Diagnosing an ailment isn’t really that much different from answering a trivia question; Watson takes in as much information as possible from the question, eliminating the potential answers as new information renders them impossible, and comes up with a list of likely answers. An example from the AP: “As more clues were unveiled – blurred vision, family history of arthritis, Connecticut residence – Watson’s suggested diagnoses evolved from uveitis to Behcet’s disease to Lyme disease. It gave the final diagnosis a 73 percent confidence rating.”

While on Jeopardy!, Watson could only give one answer, but in medicine, it lists all possible answers, along with the percent likeliness. An 80% possibility of accuracy is enough for Watson to risk money on Jeopardy, but when working with possible diagnoses, that still leaves a one in five chance that the patient is afflicted with something else, so Watson is designed to divulge even the less likely answers.

Watson’s human language recognition skills also allows it to input an entirely new sector of information: anecdotal evidence. Anecdotal evidence is not necessarily reliable, of course, but can still be extremely useful–it’s worth noting that a patient’s description of symptoms is anecdotal, and still very important to diagnosis. Watson is able to trawl through the internet, picking up the oodles of medical information out there and adding it to its memory banks. Being able to understand that, say, a “dry mouth” is the same as xerostomia can make legitimate use of all those confused forums.

Of course, Watson isn’t designed to replace a doctor’s diagnostic instincts. Instead, it’s more like a futuristic reference book. There’s simply too much information out there these days, in too many places and added too frequently, for any doctor to keep up. Watson could help keep track of all the new drugs, studies, journals, and anecdotal evidence.

Diagnosis systems using Watson are still likely a few years away, but IBM is working on ways to leverage Watson’s abilities even to hospitals with budgets too small to afford a multimillion-dollar Watson of their own. iPad apps were mentioned as a distinct possibility–doctors could tap into an off-site Watson with an iPad, shoot off a few queries and receive an answer immediately. And as more medical data is digitized, Watson will only get stronger and more useful.