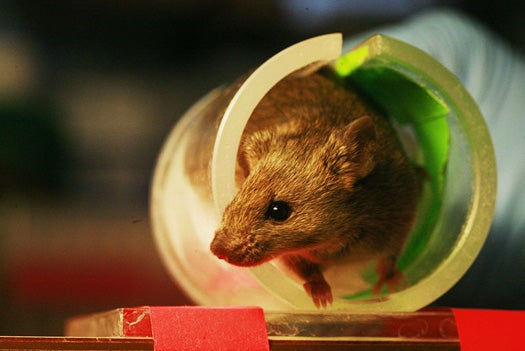 When it comes to studying human consciousness, techniques can range from the objectively scientific to the pseudo-scientific to the very abstract. After all, the complex processes happening inside the human brain are very hard to observe and define. But researchers experimenting with the molecular biology of mice–whose cognitive function and nervous system physiology is quite similar to our own–have located the brain’s trigger for aggression in mice, unlocking a series of seriously interesting insights into our own minds.

At the center of these findings is a cluster of cells in the hypothalamus, specifically in the ventromedial hypothalamus (VMH), an area that previous studies have associated with sexual behaviors (for a longer, more detailed account, we highly recommend clicking through to SciAm’s story on this). With the help of a “sexually experienced” male mouse that is also known for being quite territorial, a team of CalTech researchers was able to get a firm scientific grip on the role of the VMH in aggression as well as sexual behaviors.

That may sound somewhat intuitive, but the way it came about is perfectly fascinating, mainly because the researchers found that while the urges to fight and to mate come from the same part of the brain, they come from intermingled yet separate clusters of neurons in the VMH. Overlap was only something like 20 percent.

The researchers made this discovery by inserting electrodes near the VMH and listening in during several mouse-to-mouse encounters. In some cases, they would introduce a sexually receptive female into their test subject’s cage, at which point mating would ensue. In other instances, they would introduce another male, leading to violence. And they found that generally the brain can make love or make war, but it can’t really do both at the same time; there is an interplay between the two actions, but for the most part different neurons light up for each activity (and the neurons that initiate the other are suppressed).

The opposite also held. By silencing that nerve cluster, the researchers could render their mouse non-aggressive, even in the presence of a threatening male.

The point being, aggression and the violence it often spawns seems to be controlled by a specific cluster of neurons. This of course has implications for human behavior as well, helping to explain sudden explosions of aggression and violence that seem to be triggered by nothing at all. It could explain why some people can control themselves, and others fly off the handle–occasionally with disastrous or tragic results. Click through below for a more thorough explanation of the science behind this, we promise it’s not too long a read.