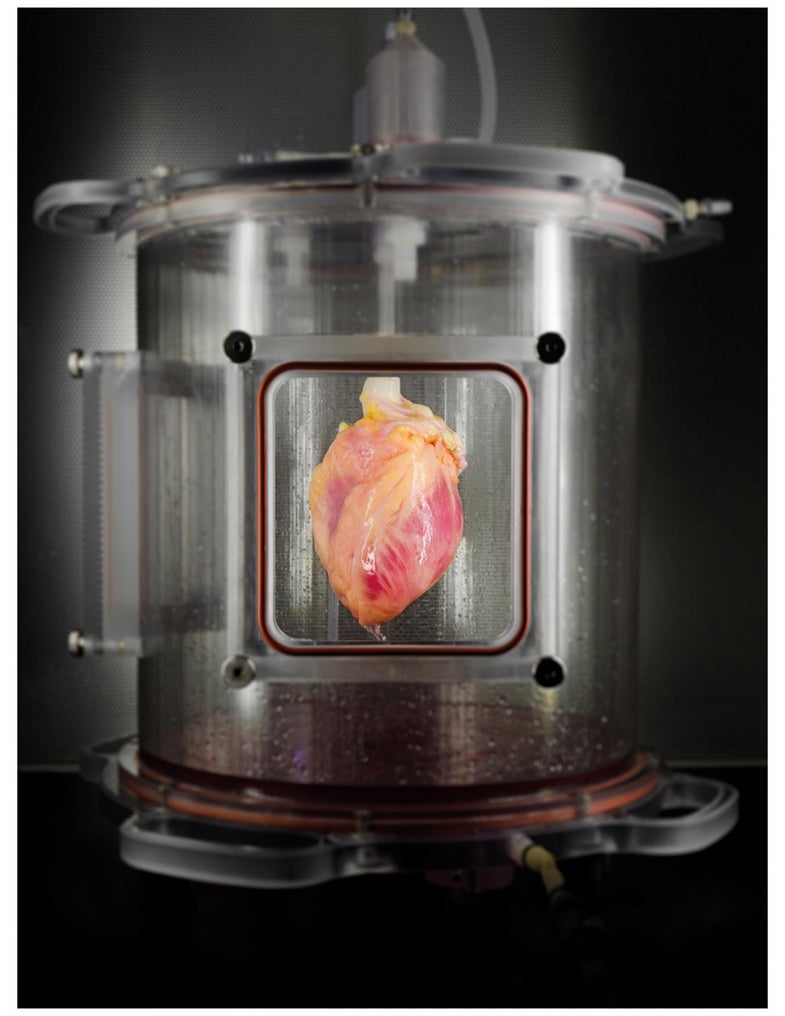 A team of scientists engineered beating human hearts by transplanting stem cells to donor hearts, allowing them to mature in a bioreactor (pictured here) for two weeks, and then giving them a shock of electricity. This is the closest scientists have come to growing complete transplantable hearts in a lab. Bernhard Jank, MD, Ott Lab, Center for Regenerative Medicine, Massachusetts General Hospital via Eurekalert
SHARE

Of the 4,000 Americans waiting for heart transplants, only 2,500 will receive new hearts in the next year. Even for those lucky enough to get a transplant, the biggest risk is the their bodies will reject the new heart and launch a massive immune reaction against the foreign cells. To combat the problems of organ shortage and decrease the chance that a patient’s body will reject it, researchers have been working to create synthetic organs from patients’ own cells. Now a team of scientists from Massachusetts General Hospital and Harvard Medical School has gotten one step closer, using adult skin cells to regenerate functional human heart tissue, according to a study published recently in the journal Circulation Research.

Ideally, scientists would be able to grow working hearts from patients’ own tissues, but they’re not quite there yet. That’s because organs have a particular architecture. It’s easier to grow them in the lab if they have a scaffolding on which the cells can build, like building a house with the frame already constructed.

In their previous work, the scientists created a technique in which they use a detergent solution to strip a donor organ of cells that might set off an immune response in the recipient. They did that in mouse hearts, but for this study, the researchers used it on human hearts. They stripped away many of the cells on 73 donor hearts that were deemed unfit for transplantation. Then the researchers took adult skin cells and used a new technique with messenger RNA to turn them into pluripotent stem cells, the cells that can become specialized to any type of cell in the human body, and then induced them to become two different types of cardiac cells.

After making sure the remaining matrix would provide a strong foundation for new cells, the researchers put the induced cells into them. For two weeks they infused the hearts with a nutrient solution and allowed them to grow under similar forces to those a heart would be subject to inside the human body. After those two weeks, the hearts contained well-structured tissue that looked similar to immature hearts; when the researchers gave the hearts a shock of electricity, they started beating.

While this isn’t the first time heart tissue has been grown in the lab, it’s the closest researchers have come to their end goal: Growing an entire working human heart. But the researchers admit that they’re not quite ready to do that. They are next planning to improve their yield of pluripotent stem cells (a whole heart would take tens of billions, one researcher said in a press release), find a way to help the cells mature more quickly, and perfecting the body-like conditions in which the heart develops. In the end, the researchers hope that they can create individualized hearts for their patients so that transplant rejection will no longer be a likely side effect.