Stem Cells Can Regenerate The Lens In Your Eye

Providing a less-invasive treatment for cataracts See that cloudiness in the middle of the eye? That's a cataract on a patient's lens. Rakesh Ahuja via Wikimedia Commons
SHARE

Cataracts, a protein buildup that clouds the lens of the eye, is the leading cause of blindness around the world. In most cases the patient will eventually need surgery to replace the clouded lens with an artificial one, and for the 20 million people worldwide per year who get the surgery, it doesn’t always fully repair their vision—many patients still need glasses or contacts. Now researchers have designed a surgical technique that uses the body’s own stem cells to regenerate a functional lens, a less invasive procedure than the current treatment. The researchers published a study outlining the treatment today in Nature.

Cataracts can occur for different reasons. The lens (the part of the eye that focuses light onto the retina) can become clouded because of protein buildup over time in the elderly, or as a result of injury at any age. But in children, cataracts can be the result of genetic problems or infections. All tissues in the body have stem cells that can replace damaged cells, but the number of stem cells can decrease over time–that’s why these researchers were especially interested in pediatric cataracts, since children have more stem cells. 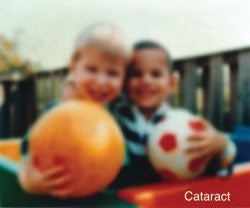 Here’s how a person would see with a cataract clouding the eye’s lens.

The team developed a technique that allowed them to keep the functional stem cells in the lens while removing the non-functional lens. When they tested this on rabbits and on macaques up to three months old (the equivalent of a human child under a year old), the researchers found that the animals’ eyes had regenerated functional lenses without cataracts within a few months of surgery. Then the researchers tried their procedure on 12 human babies under two years old. They found that, in these children, the lenses were functional and regenerated faster than the 25 children who received the standard treatment for cataracts. The new technique also reduced the chance of complications and increased the clarity of the visual field by 20 times.

Clearly, the stem cell technique works well for infants, and it might become more commonplace for pediatric cataracts than the current surgical standard. While it’s more invasive than drops to treat cataracts, it’s likely more effective.

The researchers note that stem cells also might be able to help older patients with cataracts, though the lenses tend to be harder and regeneration might take longer. That’s especially important as much of the population is aging, and more people than ever will likely need cataract surgery as a result of concurrent vision problems like nearsightedness, which is on the rise.