The aftermath of violent crimes is nothing like what we see on TV, says Stephen Morgan, a forensic analytic chemist.... 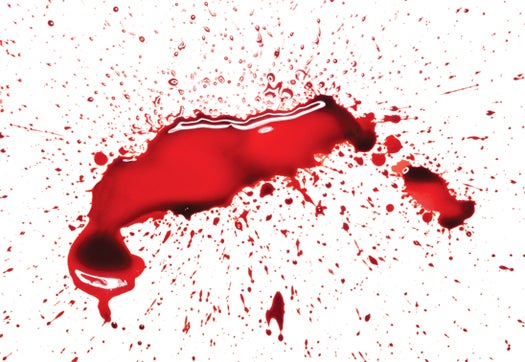 The aftermath of violent crimes is nothing like what we see on TV, says Stephen Morgan, a forensic analytic chemist. “Crime scenes are messy, chaotic. There’s a lot to look at.” Too much, in fact. What’s needed are methods to simplify the forensic process without damaging evidence at the scene. These three breakthroughs will do just that.

Investigators use spray-on reagents to locate blood spatter that’s too small to see. But chemicals can contaminate evidence or give false positives. Stephen Morgan and Michael Myrick of the University of South Carolina have developed an infrared camera system that exposes microscopic traces of blood without using chemicals. The device targets blood proteins, which remain long after visible blood has been wiped away, filtering background infrared to reveal blood residue that can’t be seen with the naked eye.

Detectives use spatter reconstructions to piece together what a crime might have looked like as it happened. Typically, investigators pin string from blood stains to a possible point of origin, but this method overlooks the fact that blood drops arc through the air. Forensic-surveying engineer Ursula Buck and her team at the University of Bern in Switzerland use laser scanners and imaging software to re-create accurate spatter trajectories. First, digital photographs of the crime scene are stitched into a panorama that shows blood-stain size and location, while the laser scanner creates a 3-D rendering of the room. The mass of each droplet is then calculated based on the size of the stain. Finally, using an algorithm developed by the Swiss team, every drop of blood has its path re-created, no string attached.

Forensic scientists had no reliable method for establishing age using blood samples before last November, when Manfred Kayser and his colleagues at Erasmus MC University Medical Center Rotterdam in the Netherlands announced that they had developed a process to determine age, plus or minus nine years. The test examines white blood cells called T cells by looking for the snippets of DNA that form inside newly made T cells as they fight infections. As we age, our bodies create fewer T cells (a reason the elderly are more susceptible to colds). The more of these DNA snippets, the younger the perp. “Police are desperate to get information,” Kayser says. “We’re mining human biology to give them a new tool.”