Experiments in a sealed aluminum chamber could tell scientists more about how clouds form on Mars. 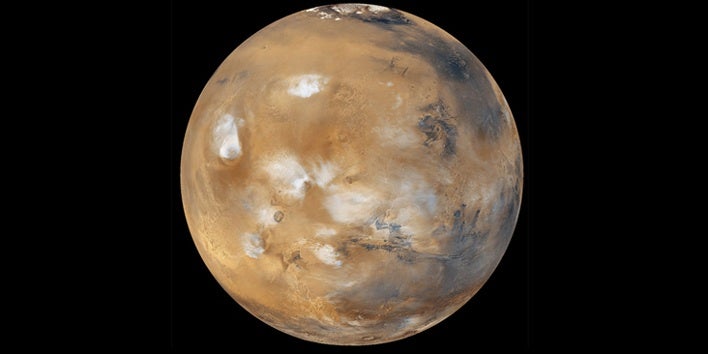 Two summers ago, in a sealed aluminum chamber in Germany, an international team of scientists created 10 Mars-like clouds. Each alien puff formed over about 15 minutes, under conditions mimicking the Red Planet’s, and the scientists never got to see them. There aren’t any windows in the chamber, so the scientists had to shoot lasers into the chamber to measure what they’d made.

From their experiments, the scientists predicted at what temperatures and humidity levels clouds are able to form on Mars. Their findings could improve mathematical models of Martian weather, which often have trouble predicting cloud formation, they wrote in a paper published in the Journal of Geophysical Research: Planets.

So how do you make a Martian cloud on Earth? Here’s what the team did:

The team found that at lower temperatures, they needed very high humidities to form clouds. The team isn’t sure why Mars clouds require such high humidities, the team’s lead scientist, Daniel Cziczo of MIT, told MIT News. They want to perform more experiments to find out.

AIDA will now undergo renovations that will allow researchers to turn down its temperatures even further. Cziczo’s team will be back next year to try to make clouds in a temperature range that’s closer to Mars’.