Neil deGrasse Tyson: ‘We Will Know Whether There’s Life On Other Planets’

Chatting about the universe with Neil deGrasse Tyson 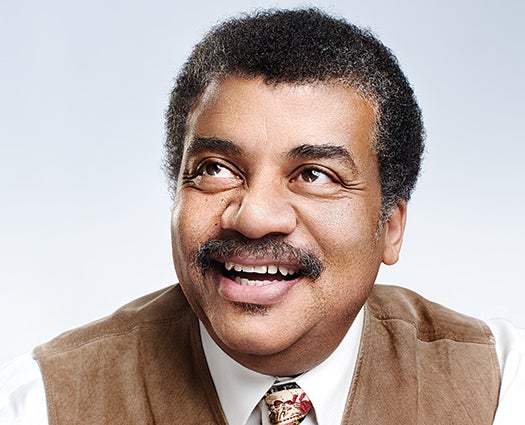 He’s the legendary astrophysicist and director of the Hayden Planetarium at the American Museum of Natural History. Tyson’s new TV series, Cosmos: A Space-Time Odyssey, will premiere on Sunday, March 9 at 9 p.m. ET/PT, and again on March 10 at 10 p.m. ET/PT on the National Geographic Channel.

Popular Science: Would you rather have a jetpack or flying car?

Neil deGrasse Tyson: What I would rather have is a transportation system that requires neither: a wormhole.

PS: What incredible thing will we see in our lifetime?

NDT: I think that we will know whether or not there’s life on planets other than Earth. And I think the best location would be on Mars or on Jupiter’s moon Europa.

PS: When we find life on other planets, is it going to come and eat us?

NDT: No. People’s first thought every time scientists discover something new is, “Oh, my gosh, you created a virus, so there’s gonna be a killer virus.” I’m not more afraid of something I might find on Mars than I am of a polar bear who’s pissed off because his ice floe is melting.

PS: What technical advance do we really need in astrophysics?

NDT: The ability to observe a spectrum of light passing through the atmosphere of an exoplanet. It would be able to tell us if there are biomarkers indicating that life thrives on the surface.

PS: What technical advance do we really need in space exploration?

NDT: Ways to shield us from cosmic rays from the galaxy and from the sun. Also, we’ll never travel to the stars unless we understand the fabric of space-time better or find out how to make a wormhole.

PS: China put its first rover on the moon in December. How will this affect the U.S. space program?

NDT: China says it wants to put stuff on Mars, and there’s no question that they are going to follow through with their plans. I don’t claim any deep geopolitical insight. But I do know that if we go back into space in a big way, it will not happen unless we feel militaristically motivated. Or, unless we feel we can make scads of money.

PS: What would a space program with only scientific goals look like?

NDT: If I put on my pure scientist hat, you wouldn’t send humans into space. You have to feed them and keep them warm. A robot couldn’t care less. We can design robots to do what humans can do and better.

_This article originally appeared in the March 2014 issue of _Popular Science.