FYI: Can Viagra Make You A Better Athlete?

The idea that Viagra helps out athletes has been around for years now, but is there a scientific consensus on it? 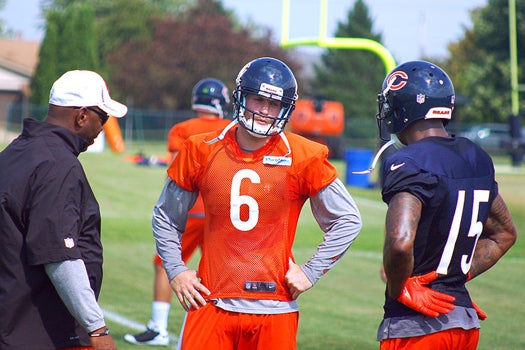 Bears wide receiver Brandon Marshall caused a great engorgement in the wit of the sports commentariat when he admitted that he’s “heard (of) guys using like Viagra, seriously” to gain a competitive edge on the field.

It wouldn’t be the first time. Cyclists, runners, and football players have been allegedly popping the little blue pill to improve their athletic ability for years–but does it help? The short answer is that no one knows for sure. Correlations between Viagra and better performance (on the field) have been found in some studies, but not in others.

Here’s the theory of why it would work: Viagra chemically relaxes muscles and opens arteries to help blood flow more easily. (To help it flow easily all over the body, but, you know, there’s the primary mission.) With the blood flowing more easily, oxygen moves to the muscles more easily, which can (theoretically) improve endurance during competition. That’s something like the idea that altitude training will improve your oxygen flow and help you move longer distances without tiring, which it does.

So you can imagine why it’d appeal to certain athletes like cyclists and endurance runners hoping to get the oxygen pumping. Don Catlin, former director of the UCLA Olympic Analytical Lab and researcher at the nonprofit Anti-Doping Research, Inc., adds a couple more athletes to that list: mountain climbers and skiers. While studies have not found a link between Viagra and athletic performance at sea level, other studies suggest Viagra improves results at a high altitude, like 6,000 feet or above, which would make it more attractive to high-climbing mountaineers and cross-country skiers. And athletes in those sports do use it, Catlin says.

Some researchers have argued that playing a contact sport at a higher altitude on Viagra would help, too, but Catlin has not found evidence to confirm that. Even researchers who are convinced that Viagra gives athletes an edge say it might only deplete the deficit already caused by competing at a high altitude.

Catlin also suggests that any improvement would be miniscule (although minuscule can sometimes matter). More to the point, athletes could gain that minuscule advantage elsewhere, without having to ask their doctor for erectile dysfunction pills. Altitude training, the process of switching between living at high altitudes and training at low altitudes, could improve performance by 1 to 1.5 percent. That doesn’t sound like much, but even that might be more useful than Viagra. Beyond that, illicit substances would make for a relatively major increase in performance, much higher than what an athlete would get from Viagra.

So if that increase is so small, why would athletes use Viagra? Because players have heard (incorrectly, maybe, especially in the case of football players) it increases performance, even if just a smidgen. That’s enough of a reason for some athletes. Plus, it’s not banned in competitive use. Without some major evidence, Catlin says, official organizations like the World Anti-Doping Agency won’t place a ban on a medication for a necessarily discreet problem. (“Excuse us, but we need to make a formal display of this condition before you compete.”)

That might be the most convincing evidence that the jury’s out on Viagra in sports: officials are unable to make a move when they’re between a rock and a hard place.