FYI: Is It Safe to Walk Barefoot in New York City?

The obvious concern is that city sidewalks are dirty. And that’s a valid concern, says Daniel Howell, a biologist at... 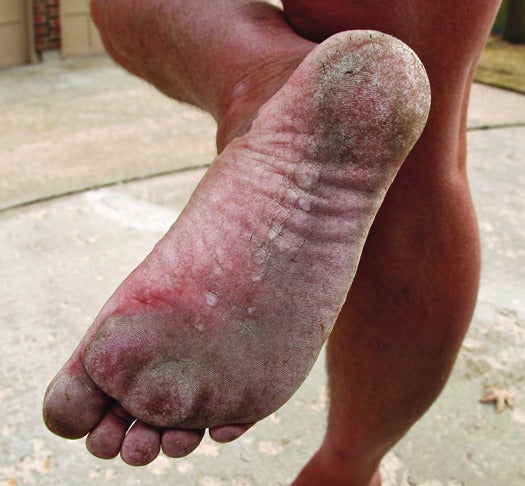 The obvious concern is that city sidewalks are dirty. And that’s a valid concern, says Daniel Howell, a biologist at Liberty University in Virginia who has lived mainly shoeless for the past few years. “There’s a lot of soot, so your feet get blacker than if you were in the woods,” explains Howell, who has toured New York barefoot several times. But, he says, a little soot isn’t bad.

Surprisingly, germs aren’t much of an issue. Disease-causing bacteria are on sidewalks, but getting them on your feet isn’t the same as getting infected. “Bacteria typically get into your body through a wet opening, like the eyes or mouth or a cut,” Howell says. “If you have an open wound on your foot, keep it bandaged. Or wear a shoe. Shoes are tools, and you should use them when needed.”

The key is looking where you put your feet, whether or not they are in shoes. Pete Fernandez is a construction worker in Chicago who has spent most of the past four years barefoot. “I’ve stepped on three nails on job sites, twice with boots and once without,” he says. “Hurts either way.”

Wounds to a naked foot, however, might be less severe. The barefoot individuals we spoke with reported that they usually feel a sharp object, such as a nail, early enough to pull their foot back before it can penetrate too deeply; shod folks come down on such objects with all their weight because they can’t feel it pierce their shoe’s sole. And studies confirm that a shod person’s wound is also more likely to become infected, because the nail passes through the person’s bacteria- filled shoe and sock and carries those infectious agents into the wound.

Like in other barefoot enthusiasts, the soles of Fernandez’s feet have developed a supple, leathery pad that lets him walk over most pointy objects, including glass. “As long as it’s not sticking straight up, I’m fine,” he says. “I get more cuts on my hands. I should probably wear gloves more often.”

One of the biggest hindrances to enjoying a barefoot stroll in New York is dog poop. Even though there’s no health threat associated with stepping in it, many of our experts agreed on this point. Cody Lundin, who has gone barefoot for 20 years and teaches outdoor survival skills, says, “Let me tell you this: People started going barefoot long before dog [poop] was in cities. I’d rather walk through a cactus plot—at least you see the cacti and know where the needles might be, and avoid them. Nature is consistent. Dog [poop] can be anywhere, because there are no warning signs in a city. It’s all over the sidewalk. There’s the hard stuff and the squishy stuff, but it’s all horrible to step in.” Thanks. Anything else? “Vomit’s nasty too. But it’s not fun to step in [poop].”