Just implement a nice kill-switch, then everything'll be fine 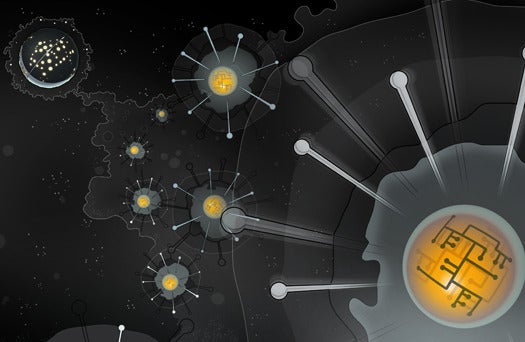 Leave it to Darpa, the Pentagon’s advanced-research arm, to bring synthetic biology to a new level of creepiness. For 2011, Darpa has dedicated $6 million to a new program called BioDesign, which according to the agency’s budget is an attempt to eliminate “the randomness of natural evolutionary advancement” and create synthetic organisms for specific functions—for instance, microorganisms that clean up oil spills or skin cells that an army medic could use to repair injuries. The twist: Darpa wants organisms “that could ultimately be programmed to live indefinitely.” Just in case, they would be equipped with a “self-destruct” option.

But the self-destruct function, which should destroy the cells at a predetermined time or when they left their intended environment, has rarely been tested outside of a lab. There’s no way to limit a cell’s interaction with other cells or with its environment. There’s no guarantee that the cells won’t mutate or replicate incorrectly; synthetic skin cells, for example, could reproduce out of control, causing a cancer-like tumor.

Nor is there any way to ensure that these synthetic organisms won’t share genetic material with organisms in the environment, giving rise to who knows what kind of microbes. “Engineers hope that they can engineer organisms that are going to behave in a way they predict,” says David J.J. Gresham, an assistant professor of biology at New York University. “But as soon as they put it into some selective environment, evolution is going to take over.”

Immortal bacteria and unstoppable flu viruses may not be imminent, but the potential for Darpa’s synthetic DNA to work its way into other organisms is very real. “DNA transfers from one microorganism to another happen all the time,” says Roy Curtiss, the director of the Center for Infectious Diseases and Vaccinology at Arizona State University. “Worst-case scenario?” says Todd Kuiken, a researcher from the Synthetic Biology Project, an independent study group. “The kill switch doesn’t work, and then these things start mutating and mating and splitting—the normal process of an organism.” Or the kill switch could work too well: Imagine if a kill-switch-equipped organism managed to form hybrids with microbes essential to the oceanic food chain, triggering a widespread die-off. The consequences could make an oil spill look good.

There’s no stopping synthetic biology, but the research community needs checks and balances. As bioethicists Mildred K. Cho and David A. Relman have argued, designing “effective oversight mechanisms” will be challenging, but essential.