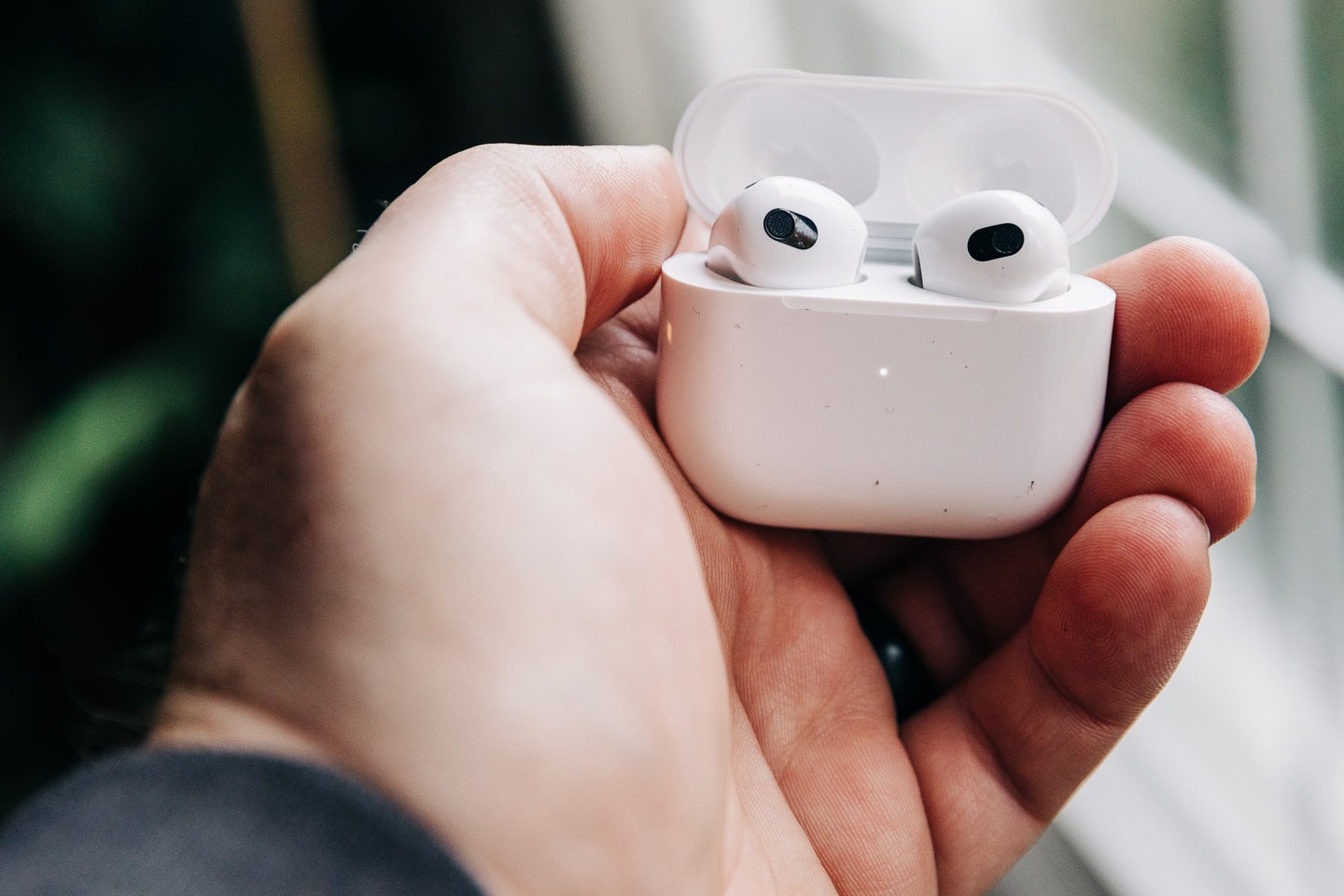 Last time Apple updated its base model AirPods, the company’s headphone lineup looked a lot simpler. Neither the noise-canceling AirPods Pro, nor the luxurious, over-the-ear AirPods Max even existed yet. On their release in March 2019, those AirPods were simple; almost instantly ubiquitous true wireless earbuds designed to fit most people’s ear canals and musical tastes. Things are different now. The Apple AirPods 3, which Apple announced in October 2021, have a considerable challenge. They need to improve both the sound and design enough to differentiate themselves from the second-gen ’buds (which are still available at a reduced price) without cannibalizing too many features from the upgraded Pro model and muddying the water.

After roughly a week with the third-gen AirPods, the seemingly samey design stands apart. The redesigned ’buds have clearly carved out their own spot in the hierarchy with revamped internal components and a new shape that should fit more ears than their predecessors. The old AirPods were excellent. The new ones are even better.

Setting up the new AirPods 3

The big jump from first-gen to second-gen AirPods centered around a move from the older W1 chip to Apple’s newer H1. It made the ’buds more power efficient and, more importantly, made the pairing process much simpler. It’s a life-saver for Apple fans who hop between their iPhones and their MacBooks all day.

The third-gen AirPods also rely on the H1 chip, so the setup process should feel very familiar if you’re already used to setting up Apple accessories. Place the AirPods near your device(s) and blink—you’re paired. Once connected, the AirPods can simply switch back and forth between your devices. They still get hung up here and there, but the handoff is ultimately a smooth process and one of the big selling points that come with AirPods.

As you might expect, there’s also no need—or opportunity—to tweak the sound performance as you’d expect with other wireless earbuds. Apple has introduced its Adaptive EQ feature from the AirPods Pro, but that’s an opaque process that adjusts automatically. It makes setup mega simple, but also leaves you out of luck if you want to make individual adjustments to suit your sonic preferences or needs.

Once you take the AirPods case out of the box, you’ll notice that it now opens along its long edge. The AirPod stems that dangle from your ears are shorter now so they can easily fit in a more squat case. The case itself looks and feels similar to the AirPods Pro case, but smaller.

The AirPods themselves look a bit different. The shorter stem swoops forward now instead of extending straight down. The design is very reminiscent of the AirPods Pro, just without the tip that extends into the ear.

In addition to the aesthetic redesign, the new AirPods also sport the Force Touch controls found in the AirPods Pro. The gesture controls from the previous model are gone and now that black patch on the side of the ’buds allows for giving simple commands like play, pause, skip tracks, and summon Siri.

That force sensor works well…sometimes a little too well. If the AirPods don’t fit your ears perfectly and you have to adjust them often, they’re still prone to accidental activations if they were a problem for you before.

How do the new AirPods 3 Fit?

Since we’re already talking about fit, this is probably a good time to admit that I’ve never had much luck keeping AirPods in my ears. The AirPods Pro are the only Apple earbuds that have ever stayed in place for me. I know tons of people who can literally run marathons without issues, but I can fling one out of my ear by simply turning to look at my second monitor too fast. In theory, the new earbud shape is designed to fix that problem.

And it did…kinda. The new design helps the AirPods sit better in my ear. The shorter stems also didn’t touch my beard as much, which is a very specific advantage that I don’t imagine Apple was considering during the design process. (Still a win, though!)

My daughter has been wearing her AirPods pretty much every waking hour for several years now, so I asked her how the new versions fit compared to the old models. She didn’t notice a huge difference and could vigorously shake her head without them flying out. If the old models fit you, these likely will too. If the old models wouldn’t stay in for you, it’s worth giving the new design a try before writing them off.

How do the new AirPods 3 sound?

As I mentioned, Apple pulled in some of its more advanced audio technologies to help set the new AirPods apart from their predecessors. Adaptive EQ promises to change the AirPods’ sound quality in real time, using an inward-facing microphone to hear what you hear in an effort to provide the best experience in your current environment and with your present listening material. Listening to a soft-spoken podcast about murder on a quiet walk around the park presents different listening challenges than blasting the new Every Time I Die record in an effort to drown out the squeal of the subway wheels on the tracks.

Evaluating Adaptive EQ is difficult because it’s opaque by design. Apple doesn’t want listeners to notice when it’s making adjustments to the earbuds’ audio mix. The changes are subtle and the overall effect is difficult to notice unless you’re trying to trigger a change or you regularly move from starkly different settings in rapid succession.

In general, though, it’s fair to say that the new AirPods definitely sound better than their predecessors. Apple redesigned the drivers inside the ’buds in order to produce a full, more bass-friendly tone. It has absolutely succeeded. Spinning the new Knocked Loose “A Tear in the Fabric of Life” EP requires lots of punch for the downtuned guitars, brutal drums, and frantic vocals. Listening to it on both sets of AirPods back to back gave the clear advantage to the new models and its custom “high-excursion” driver.

The same goes for other genres of music I tried as well. The Wu-Tang Clan is in the headlines since the group’s unreleased-except-for-the-people-who-bought-it multimillion-dollar record changed hands, so I gave the actually accessible, always satisfying “Enter the Wu-Tang (36 Chambers)” a millionth listen. As expected, the new AirPods sounded much better here, too. The beats bump just a little more and the twinkling piano sampled in “C.R.E.A.M.” cut through more clearly.

Of course, once you extend the sound quality test out to other wireless earbuds, or even to the AirPods Pro, it’s a different story. The Pro’s active noise canceling and much better sound isolation from ear canal-filling tips is a clearly better way to listen to music if you don’t have to hear the world around you. The same goes for other high-end offerings like Sony’s excellent WF-1000XM4 earbuds.

Spatial audio on the AirPods

This is another area in which the new AirPods borrow from the AirPods Pro and Max. When you watch or listen to content that’s spatial audio-compatible, it can create a simulated surround sound effect that runs the gamut from cool and immersive to cheesy and gimmicky depending on the content.

With the old AirPods, you may not necessarily have even noticed if content had spatial audio. The soundstage feels larger, but it also stays firmly in place within your head as you look around. It’s one click fancier than typical stereo sound.

The third-gen AirPods (along with the Pro and Max models) have the necessary hardware to actually track your head’s movement. With head tracking toggled on in the iOS 15 Accessibility settings, that can keep the soundstage locked to whatever device you’re listening to. So, if you’re watching a movie on your iPad and you turn your head, the sound will change in real time to mimic what you’d hear if you turned your head in the scene.

It’s hard to describe, but it’s easy to understand the moment you experience it. That might explain why Apple has had so much trouble clearly communicating the benefits of spatial audio with its recent announcements.

Ultimately, I think spatial audio is great for watching content, but it still feels relatively gimmicky to me in the case of most music. That may change as the tech gets better, bands pay more attention to it, and we get more used to it, but at least these AirPods are equipped to handle it to whatever extent you prefer.

The rest of the new AirPods 3 features

Battery life on the new AirPods 3 jumps up to six hours of total use before they need to go back in the case for a nap. The case itself holds three full charges worth of juice, which means the combo has enough power for a full 24-hour day. The case also comes standard with wireless charging, though Apple hasn’t gone as far as enabling reverse wireless charging from MagSafe iPhones. That would be nice.

The AirPods are still excellent when it comes to microphone and call quality, too. Even with the shorter stems, their dual beamforming microphones picked up my voice clearly in quiet and noisy settings. Expect to see a lot of these start popping up in your work video conferences.

Who should buy the new AirPods 3?

With the AirPods Pro frequently hitting sale prices just a couple dollars above what the new AirPods 3 sell for, it can be tempting to make the upgrade. Ultimately, though, the products serve very different users.

If you’re the type of person who wants to leave one or both AirPods in all the time, you’ll likely find the regular AirPods more comfortable and less sweaty. The regular AirPods are also better if you’re going to be walking around the street or even running. They’re now IPX4 rated, which means they’re tough enough to endure the rigors of the gym and they won’t block out the sound of an oncoming bus that could really ruin your morning jog. If you’re the type of person who likes to keep one AirPod in, the base model also makes a lot more sense. Putting in one earbud with sound isolation and noise-canceling feels awkward and uncomfortable.

When compared to the previous-gen AirPods, the sound quality improvement alone is worth the upgrade if you can swing it. The new models also get you the better design, battery battery life, and wireless charging as standard features.

Ultimately, the new AirPods 3 do everything their predecessors did, but better. By now, you probably already know if that’s what you’re looking for. Either way, you won’t be disappointed.