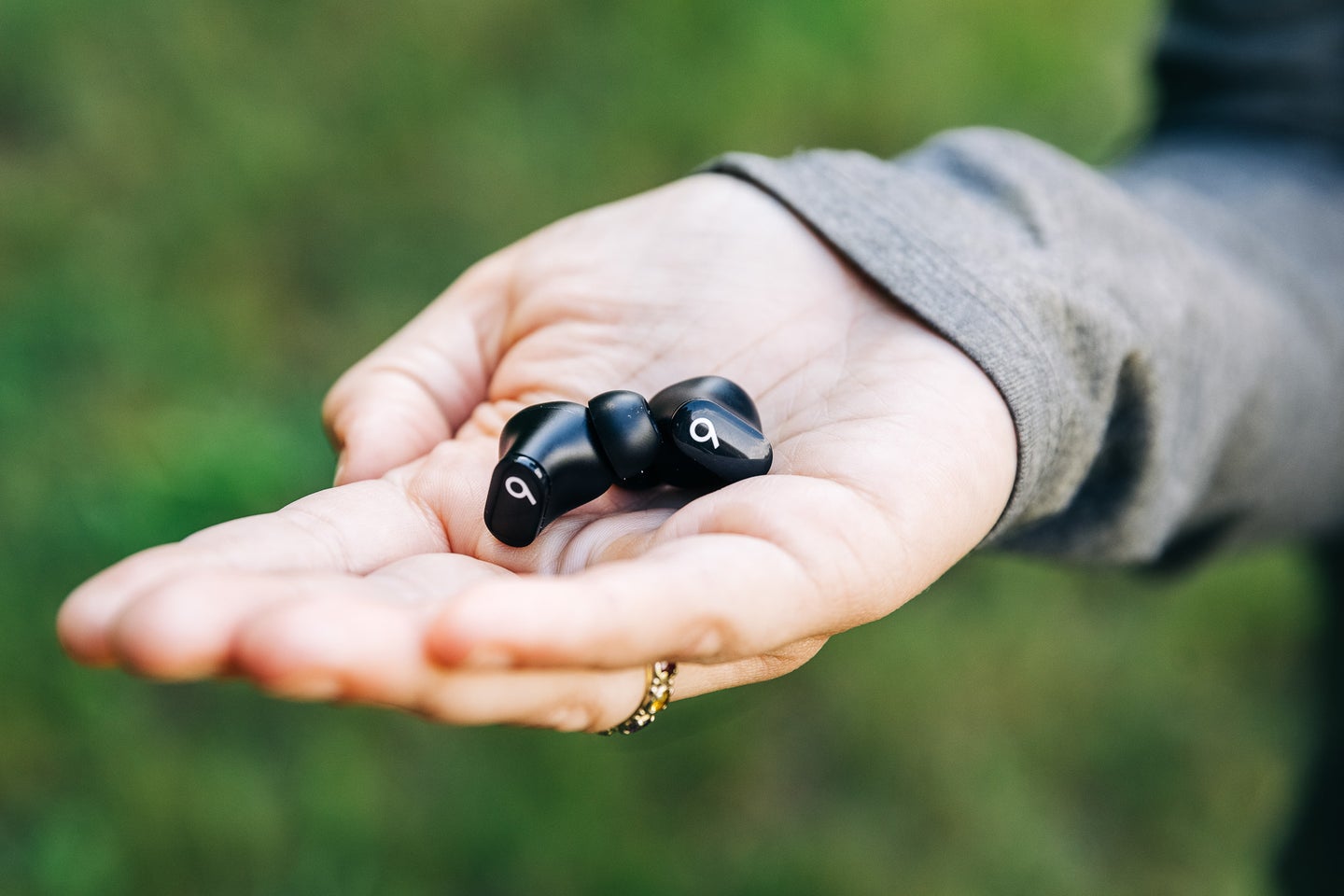 You won't be able to hear them if you hold them like this. Put them in your ears. Stan Horaczek
SHARE

The Beats Studio Buds are just the second pair of truly wireless earphones from Beats, and the first pair of Beats wireless earbuds to offer active noise cancellation (ANC). But that’s not the biggest headline here: The $150 Studio Buds also represent an unexpected appeal to Android users from an Apple-owned company. While these Beats Bluetooth earbuds don’t necessarily blow away any of their competition when it comes to sound or noise-canceling, their clever design, solid sound, and extremely compact form factor make them worth considering in this increasingly crowded space.

By now, we expect Beats wireless earbuds and headphones to play extra nicely with iPhones. Since Apple purchased the audio company back in 2014, Beats has remained largely independent and has maintained the No. 4 spot when it comes to the Bluetooth personal audio business. But Apple hardware has been creeping in. The company’s Solo Pro on-ear headphones and its other pair of Beats Bluetooth earbuds, the Powerbeats Pro, both utilize the company’s H1 chip inside, which offers Apple users special privileges like super-easy syncing, seamless device switching, and always-on Siri summoning.

Enter the Beats Studio Buds. As I’m writing this, I have the newest Beats buds synced to a OnePlus 9 Pro. It feels slightly weird to test a Beats product on an Android phone, but the $150 Studio Buds don’t have the Apple H1 (or the newer W1 chip) inside, so they’re decidedly more platform agnostic. While iPhone users still get some extra features (more on that later), Android users can now monitor battery life via Android’s Bluetooth menu, and the Buds will show up in Google’s Find My Device ecosystem. Obviously, the integration with the OS isn’t as tight as you’d get from something like Google’s own Pixel Buds, this is the best Beats experience on Android so far.

Each 5-gram bud nestles magnetically into a rounded charging case. The Beats wireless earbuds are extremely small when compared to other ANC-equipped models like the Bose QuietComfort Earbuds or the new (and considerably more expensive) Sony WF-1000XM4.

The buds promise five hours of battery life with noise-canceling turned on, or eight hours with it turned off. The battery case holds enough juice for two full charges. Interestingly, the holder has a USB-C charging port instead of the Lightning port you’ll find on the PowerBeats pro—another little olive branch to Android users who are likely flush with USB-C cables and chargers.

If you’re familiar with audio-specific jargon, the Studio Buds offer a dual-element driver in a two-chamber housing. The Beats boast a pair of beam-forming mics to pick up the wearer’s voice, as well as an outward-facing microphone to help with the noise-canceling earbud’s features.

Setting the Studio Buds up on an iPhone is as simple as you’d expect. Open the case, bring the iPhone near and the familiar little setup window pops up at the bottom of the screen. Google’s Fast Pair makes the process similarly simple on Android, as well.

Putting the buds in your ears, you’ll notice that there are no touch controls on the earbuds themselves. Instead, they rely on a button that encompasses nearly the entire outward-facing surface of each bud. I prefer physical buttons to touch-sensitive surfaces, because you can actually adjust the devices in your ears without having to worry about accidentally skipping tracks or cranking the volume. However, I did find the buttons on the Studio Buds slightly too easy to press, so they’re not totally absolved of accidental commands.

I have average-sized earholes, and the stock medium silicon tips created a secure seal in my canals. Once they were secure, I could shake my head like I was in the front row of a Cannibal Corpse concert and they stayed put. Part of that ease comes from the extremely light weight, which also makes them very comfortable. I wore them for hours at a time during my workdays and didn’t feel chafed or sore.

The case, though, did take some getting used to. If you try to put the wrong bud in the incorrect slot, the magnets don’t line up and you can fling your Beats earbuds onto the floor. Much more importantly, however, I didn’t experience the annoying Powerbeats Pro bug in which one earphone would charge while the other one wouldn’t. That flaw has ruined too many workouts for me, but it’s thankfully not an issue here.

Overall, the Beats Studio Buds feel solid, if slightly less premium than some of the company’s other offerings. The $150 price point is low for a Beats product, especially one with noise-canceling built-in, so it’s not surprising that they don’t feel quite as burly as the workout-oriented Powerbeats Pro or as luxurious as the on-ear Solo Pro.

I’ve been a fan of the Powerbeats Pro for a long time, but the overall sound performance has always been a bit too bass-heavy for me. The highs come through just fine, but the middle frequencies tend to get a little lost in the boom. The Studio Buds remedy that, and I found the overall sound much more balanced in just about every type of music I pumped through them.

Action Bronson’s “The Choreographer” offered plenty of thumping bass, but I could also make out the multiple harmonies in the dreamy retro sample. The new Lorna Shore song, “To the Hellfire,” is a torture test for even the best earbuds with its mixture of goblin-style growls, downtuned guitars, and machine-gun drums that can quickly turn into a muddy mess. The Studio buds handled it without a problem.

If Spatial Audio is really important to you, the Studio Buds will give you some of the experience, but not all of it. Spatial Audio relies on Dolby Atmos tech to give the music a much broader sense of space and the illusion of height and air comes through clearly with the Studio Buds. Unlike the Apple-branded personal audio products, however, the Beats earbuds don’t have built-in sensors to track your head movement and adjust the soundstage to match your position. If you want the most advanced spatial audio experience, opt for something like the AirPods Pro earphones or the spendy, over-the-ear AirPods Max.

Overall, I really like the sound profile that the Studio Buds offer, which is lucky because they don’t offer manual or even preset adjustments. That’s typical Beats/Apple style and it has worked again here, at least to my ear.

If you’re looking for powerful active noise-canceling earbuds, then the Studio Buds probably aren’t for you. This is the company’s first pair of earbuds with ANC and it feels a little like a work in progress. With ANC turned on, I could still hear traffic and street noise that I’d expect a more robust system from Bose or Sony to completely nuke. This isn’t inherently negative; I sometimes find noise-canceling comes on a little too strong for my own tastes. In the case of the Studio Buds, though, it’s a little underwhelming compared to other—typically more expensive—options.

I was also slightly disappointed in the microphone performance. The Studio Buds rely on a pair of beam-forming microphones to pick up your voice during calls and I experienced some crackles and imperfect audio during some long audio conferences. That’s a place where AirPods typically shine, so I was a bit surprised when things like background noise were an issue when using the Studio Buds as a headset.

The call quality is by no means a deal-breaker—it’s more than fine for phone calls and summoning Siri—but if you’re going to be spending lots of time on Zoom, you’re probably better served with a pair of AirPods Pro—still the best wireless earbuds for iPhone.

So, who should buy the Beats Studio Buds?

Despite the fact that they’re still essentially a first-gen product for Beats, the Studio Buds feel polished and capable. I found the sound profile very attractive and, since I don’t spend hours on the train each week anymore, the underpowered noise-canceling isn’t much of an issue for me. I also appreciate how easy it is to switch between Apple and Android devices, but that may be specifically a problem that gadget writers experience more than the typical user.

If you’re primarily concerned with fitness, the bulkier Powerbeats Pro may be a more appealing option. Since they’re older, the price has come down considerably from the original $250 retail cost. They’re a lot bulkier than the Studio Buds, but the ear hooks keep them in place during the gnarliest workouts. The Powerbeats also offer nine hours of battery life per charge and offer more robust waterproofing since they have to survive marathon sweat sessions. You miss out on active noise-canceling, though.

The biggest detractor when it comes to recommending the Beats Studio Buds, really, is the simple existence of the AirPods Pro. If you’re looking for the best wireless earbuds for iPhone, the W1 chip inside Apple’s flagship earphones offers some distinct advantages—like seamless device switching, instant connectivity, and better noise-canceling. The AirPods Pro are bigger, slightly heavier, and cost $50 more, but the extra features will make them the best earbuds for some. Unless you’re an Android user. Then, the Beats Studio Buds should do just fine quelling your AirPods lust. Just be sure to buy them in white.