What Is A Digital-To-Analog Converter, And Do You Need One?

For $200 You May Never Go Back To Mediocre Sound Again 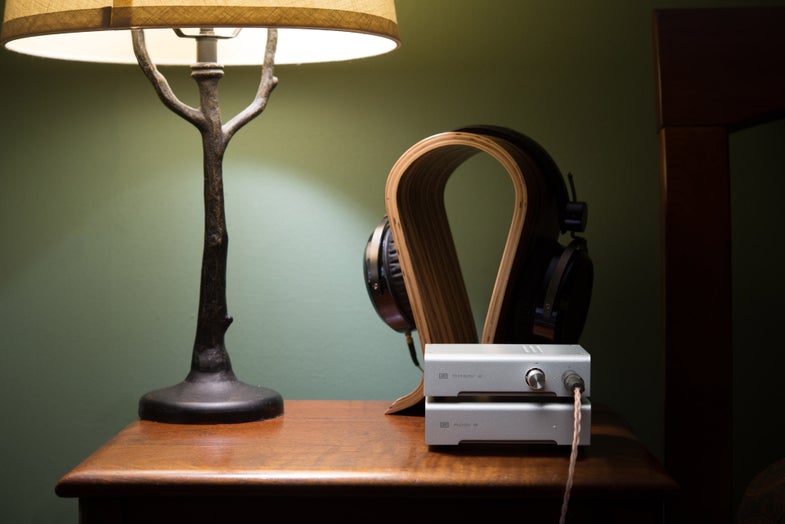 If you’ve ever wondered why the sound you hear through your laptop’s headphone jack is wildly different from the sound that comes through your stereo system, the short answer is that your laptop is missing one of the key steps to make sound out of numbers: digital to analog conversion.

Better home audio is a nebulous world of micro-advances in technology that are tedious enough to make your head spin like a record. It’s a frustrating, seemingly endless struggle to improve what we hear. And as more and more of what we listen to comes from our hard drives and cloud services, we’re less dependent on the medium itself and more dependent on the technology that turns data to drum beats.

But the audio company, Schiit, which started back in 2010, argues that the best way to maximize the sound that comes into your headphones is to connect the headphones via USB to an external digital-to-analog converter (DAC). The idea is that, whether you have lossless, uncompressed files (which, unlike stripped down MP3s, hold more information and more accurately represent the original sound), iTunes, or a streaming service like Spotify, you’re not getting the full potential without a middleman.

Though you may not realize it, DACs are ubiquitous. Your TV, phone, gaming systems, and even your parents’ CD player all have them. Anything that uses an electronic signal for source (audio or video) has to convert information into its display medium, so while the audio side of things appeared as a way to improve mp3 quality, TVs have actually had to unpack digital signals for longer. Companies like Schiit, which is not the only maker out there, are essentially offering an upgraded alternative: Think of it like switching out a graphics card on a gaming computer, or adding a soundbar to your TV. It’s about adding a more powerful, dedicated component to the equation, for people who want a little more from a device. Those people may include music lovers, video and audio editors, or just individuals with very picky ears.

Believing that everyone was truly lacking in audio sufficiency without this product, Schiit built one of each at just under $100 each and started selling them almost a year ago, in January of this year. The company lent both pieces out for a field test in the research for this story.

How Does Music Actually Get To Your Headphones

You’re probably wondering what an amp and a DAC do that your headphones can’t, and that’s logical. To understand this, though, it’s important to know exactly how your music gets to your headphones. Though Dre and other companies that sell street-ready headphones may have you believe otherwise, achieving the perfect digital audio is about more than the two speakers on either side of your head.

Good audio is all about preserving as much of the true, natural sound as possible between the studio and your ear. And that’s hard with the number of transformations it goes through. Sound waves from a guitar are transcribed the first time as electrical impulses from, say, a microphone. That’s one change, and the better the microphone, the more sensitive it is to things like fingers sliding along the strings between chords. Those impulses have to be recorded, and the more information you want (depth of sound) the larger the files have to be.

When you want to listen to that recording, the digital file has to be transcribed back to electronic impulses, which then are transmitted through speakers (like those in your headphones).

At every step in the process, inferior technology means loss of fidelity. Bad mic? Bad sound. Bad tech? Bad recording. Bad headphones? Bad representation. And while the studios invest in the best equipment, and you can buy the best file types and amazing headphones, you’re still doing yourself a disservice if you’re neglecting the bridge between the file and the headphone.

That’s where the DAC comes in.

Schiit’s Modi 2 DAC and Magni 2 amp work together in a perfect little team, unpacking the sound at a higher quality. Unlike your laptop headphone jack, it’s powered for extra voltage, so the digital signals become more detailed electrical impulses, which creates better transcription.

The Schiit devices are small, too and unobtrusive, which is a plus. The two stacked on top of one another are a little bigger than a box of business cards.

While they performed well in my home test, that doesn’t necessarily mean that everyone who tries this product will come to the same conclusion. Hearing is very subjective as we all appreciate different qualities, and it’s likely that you and I have different musical tastes. Keeping those differences in mind, here’s how I ran my tests.

I established controls by listening to my headphones (a studio pair of Sony MDR-7506) through the headphone jack on my desktop Chromebox, and then by playing the sound straight through my monitor.

I listened to a few different things: movies on Netflix, a few select YouTube videos and live streams, and finally music on Spotify and then Tidal, a lossless Spotify competitor.

Across the board, boy was the sound crisp. Movie soundtracks took on new depths. I heard subtleties in the dialogue of Hannibal Lecter in “Silence of the Lambs” and picked up on previously unheard parts of tracks off a favorite Weezer album. (The distortion was a good challenge, alright?)

Schiit cofounder, Jason Stoddard, says the novelty of the new sound will surprise you. “Modi 2 will improve the quality of all digital sources.” Similarly, he explains, “Magni 2 is dramatically better than the headphone output of a phone, laptop, or tablet—having 10 to 100 times the output power, and a low output impedance that is ideal for any headphone.”

Should We All Convert?

However, where this novel device fits on the scale of real world value is still up for debate. Stoddard says that often, there is only so much data to improve upon, and importantly not all sound is streamed equally. “Spotify, like Apple Music, is a compressed source—the music has been reduced to 320kbps in order to make it more streaming-friendly. Fully, 80 percent of the original music content has been eliminated.” That’s a lot of information gone. If you compare this to dilution, it would be like drinking a beverage that is two ounces soda and eight ounces water.

“Perceptual encoding,” Stoddard says, “means that it doesn’t sound as bad as it is, but it doesn’t sound as good as, say, Tidal (which is lossless) or lossless rips of CDs from iTunes. Netflix is a whole different ball of wax, but it typically uses compressed audio as well.” That means that, no matter how good your tech is, at some point Spotify (or Netflix, which can be worse) is not going to sound any better.

Case in point, it still sounds much better with the Magni 2 and Modi 2 grouping than straight through my Chromebook or Macbook headphone jack. And that made me curious about the varying quality of what I was listening to. I signed up for Tidal’s lossless service, and compared several tracks from different genres. If you’ve ever heard the song “Killer Queen”, you’ll remember the finger-snapping intro, and the distorted vocals from the chorus. Both were crisper, with more fullness on lossless playback, adding an extra dimension to the whole package.

Stoddard actually had some cautions on music services worth sharing. He says you need to be careful about what service you use, and how they deliver data. “The 320k rate of Spotify and Apple Music is really pretty good, but there are also a lot of streaming stations out there running 192k and even 96k bit-rates. In addition, some services are dynamic, in that they will reduce the bit rate if the connection is slow or if there’s network congestion.”

But back to my test results. After a few minutes, I found an old pair of earbuds for which I paid under $30. The sound was comparably tinny and distant, like it was coming down a hallway, or from a passing car. The base was present but muddy, and sort of sloshing about over things that had been crisp and distinct minutes before.

I did find that not everything has the capacity to sound great. Better equipment can actually make bad audio sound worse, and in my experience it happened worst with Netflix. Some movies sounded good, but some sounded only okay. “The Last Waltz” was not great. It’s a documentary about a concert and it sounds flat and a bit hollow. I’m sorry, Scorsese, they’re not doing you justice.

Maybe the only downside of upgraded sound is that upgrading makes it hard to go back to the way things were, like when you’re on the move and can’t stay plugged in. That’s a compliment to Schiit’s technology, but a problem you’ll have to reconcile on your own if you decide to upgrade.