The ABCs of ANC: What is active noise-cancelling and why do I want it?

Being able to work from anywhere is convenient but not always optimal. Enter active noise-cancelling and exit distractions. 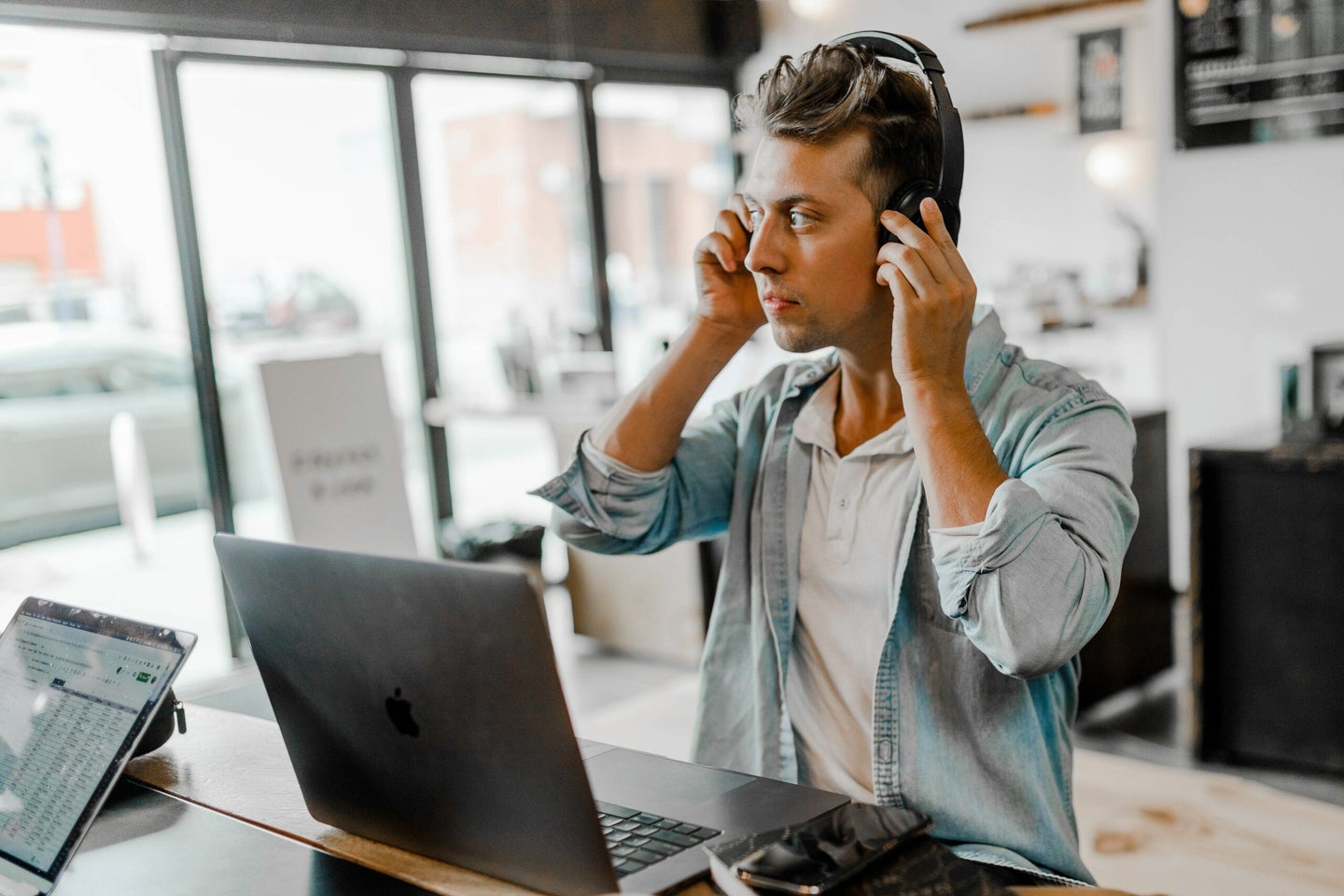 Active noise-cancelling headphones are all about turning on and tuning out. Austin Distel
SHARE

Active noise-cancelling, or active noise control, is a feature that’s gone from relative rarity to practically a prerequisite for any wireless headphones and earbuds released. As mobile meetings and work from home become commonplace, so does putting more microphones in headphones. But taking calls from the coffee shop means dealing with environmental noise. The ANC acronym on headphone packaging lets you know that all those microphones surrounding your head can help you concentrate and communicate even in a sea of chatter. And if you just want to relax with a favorite album or stay in the zone on a run, ANC can help with that, too. In this article, we’ll give you a brief rundown that answers what is ANC (active noise-cancelling) and offers some key things to watch for when shopping for top-tier noise suppression tech.

Headphones are just earmuffs with a better soundtrack. Closed-back headphones, not to mention earphones, have delivered passive noise-cancelling—the simple act of covering the ear canal to keep out unwanted sound—since Day One. That’s most effective against high frequencies, however. Now technology is being leveraged to further improve the environmental extremes headphones and earphones can combat—no more continually jacking the volume and permanently damaging your hearing. But just because active noise-cancelling is in the news doesn’t mean it’s new.

Despite feeling like very modern tech, noise reduction circuitry has been around and evolving for the better part of a century. In his 1936 patent, inventor Paul Lueg described “a process of silencing sound oscillations, especially of a disturbing nature” achieved using a microphone and a loudspeaker. Later, in the mid-1950s, engineer Lawrence J. Fogel patented systems for improving the audibility of speech in plane and helicopter cockpits that closely resemble the ANC tech we know today. The Bose Corporation brought this technology to consumers starting in the late ’80s. To get to the bottom of exactly how ANC works, we need to start with a bit of the kind of simple physics they explored.

Sound itself is immaterial, meaning that it can’t exist without a medium through which to move. In our everyday world, sound consists of acoustic pressure waves that originate from mechanical vibrations and travel through air molecules. Like all waves, these have alternating peaks and valleys, and those physical properties can be disrupted or enhanced through the introduction of other waves. This is where the mechanic behind active noise-cancelling systems lies: by capturing ambient noise using a microphone, analyzing it, and replaying it simultaneously with inverted phase, the opposing peaks and valleys cancel each other, potentially reducing the wave’s amplitude to nothing. In other words, if the offending sound wave moves in one direction, the ANC sound wave moves in the opposite—with the resulting effect being a great reduction or even a full elimination of the noise. While this can affect the tone of a headphone, digital signal processing has progressed to the point that any shifts are compensated for. It should almost go without saying, however, that ANC headphones aren’t for audiophiles, producers, and purists.

Now we know the basic elements of an active noise-cancelling system: at least one microphone for capturing ambient noise, a bit of circuitry or programming to invert the captured noise, and at least one speaker for transmitting the inverted audio. Because they’re effective at deadening that constant hum of engines and offices, ANC chipsets are proudly advertised in Bluetooth headphones and earbuds—gear for on the go. Isolating outside noise is a trick smartphones have been employing for quite some time to improve call audio quality. In fact, if you’ve ever used an iPhone, etc., you’ve probably benefited from ANC tech without knowing it.

Simultaneous noise cancellation and voice capture requires multiple microphones to get the job done effectively. Without multiple microphones, an ANC device has no way to tell the difference between desirable noise from the user’s speech and environmental noise; a single-microphone design would simply cancel out all noise, period. For this reason, most modern smartphones use at least two microphones to achieve better call clarity, placing one microphone next to the user’s mouth and another as far away as possible. With a multi-microphone system like this, smartphone ANC systems can not only capture the user’s voice clearly but even enhance it by comparing it to the ambient noise and knowing exactly what audio to let through.

Despite having less case real estate to drill and fill, the best active noise-cancelling headphones and earbuds build on this same design principle and are often equipped with arrays of specialized microphones to deliver vocal clarity that’s a cut above the stock specs of a smartphone. For instance, the Jabra Elite 85t noise-cancelling earbuds feature a total of three microphones in each earbud: two dedicated solely to capturing internal and external ambient noise and one pointed at the user’s mouth. The Sony WF-1000XM4 earbuds, similarly, integrates one outward- and one inward-facing mic, plus a “beam-forming” mic to home in on vocals and an advanced processor dedicated to monitoring and adapting ANC performance (making it an earbud we appreciate). Manufacturers take slightly different approaches, some pack more pickups and chipsets and/or optimized algorithms than others, but the desired result is the same: own the drone.

What’s the opposite of active noise-cancelling?

If ANC earbuds and headphones contain multiple microphones to capture the outside world, they should theoretically be able to play back what they hear in your surroundings, which is exactly how Transparency mode works. By offering users the ability to selectively hear external noise even while listening to other media, Transparency mode (called everything from SurroundSense to simply Ambient Mode by different manufacturers) can potentially allow for better productivity and heightened situational awareness while performing activities in public spaces. Since Transparency mode uses existing microphones and doesn’t require any extra hardware, most active noise-cancelling earbuds and headphones include this functionality by default. Still, if you want to get the most mileage and versatility out of your ANC tech, double-check that your choice has this feature.

One of the more novel ways that manufacturers are harnessing the microphones in their ANC products comes in the form of adaptive equalization, most notably found in the AirPods Pro and AirPods Max from Apple. In these designs, an inward-facing microphone measures the sound inside the user’s ear and uses that information to make on-the-fly EQ adjustments to the low and mid frequencies. The end result, in theory, is a consistent and precise listening experience that’s custom-tailored to the shape of the user’s ear, the various shifts the headphones or earphones make while in motion, and the amount and kind of noise that may be seeping in. If you’re a user who listens to a wide variety of musical genres, podcasts, and other streaming media, adaptive EQ is definitely worth taking for a spin.

A step in the right direction

The performance level of active noise-cancelling headphones is only as good as the design of the device, and even the best designs have their practical limitations. Multi-microphone systems generally do a good job at isolating the voice of the user from the ambient environment, but the louder it gets, the harder it is for the hardware to distinguish between the two. In a very crowded coffee shop or in a subway car, for example, ANC can continue to perform at a very high level but then the mics fail to properly recognize the user’s voice during a phone call in that same environment. Some of this effect can be mitigated by design choices like the number and placement of microphones, and ensuring that they are pointed in narrow, focused directions. Keep in mind, however, that it may be necessary to either switch to your smartphone’s handheld mode if taking a call in a noisy place or step out altogether.

Some final thoughts about active noise-cancelling

Whether you’re a power commuter, a powerlifter, or a master of PowerPoint, active noise-cancelling is a convenient and affordable tool for staying focused and productive. The tech behind ANC is relatively simple and now quite commonplace, and it makes everything from taking a phone call to listening to albums that much clearer and enjoyable when compared to traditional speaker designs. If you’ve never experienced the freedom that comes with headphones or earbuds with active noise-cancelling, there’s never been a better time to get started.