All the gadgets Google announced at its Pixel 4 event

Get a look at the new smartphone, Pixel Buds headphones, Pixelbook Go, Nest Wifi and more. 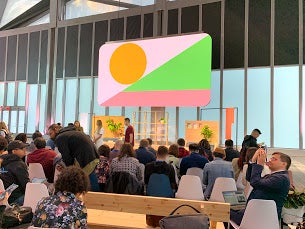 We’ve known about Google’s Pixel 4 for months now. The phone leaked so badly that Google itself tweeted about it well before the announcement could arrive. Now, however, we’re live at the Made by Google event in NYC for the official revelation. We’re expecting the new phone, of course, as well as some other hardware and software surprises.

You can watch the livestream in the player embedded above and keep scrolling down as we go for live coverage of the event. We’ll have some early hands-on time with the new devices as well.

Let’s get to the event…

Google is starting off with messaging about its general concept of “ambient technology.” This is a familiar concept that we’re hearing a lot about this year where technology is just around you at all times. “Technology works as a single system instead of a bunch of devices doing their own thing.” We know that Stadia, Google’s cloud-based gaming service, is coming on November 19th.

We’ve been waiting on Google’s answer to AirPods for a while and it’s here today. The Pixel Buds headphones have a long-range Bluetooth connection inside that will keep them connected across your yard or from three rooms away. They offer 5 hours of continuous listening and 24 hours with extra juice from the wireless charging case. Google put an emphasis on spatial awareness. The volume automatically adjusts depending on ambient noise and there’s a vent to prevent the suction seal feeling. They will enable advanced features like real-time translation and interactions with Google Assistant.

The new 2-pound Chromebook from Google promises 12 hours of battery life with Intel processors inside. It starts at $649 and goes on-sale soon. it’s the update to the original Pixelbook, and it also promises a quieter keyboard compared to the previous model. it’s just 13mm thick.

The Google Home Mini was the easiest way into the Google Home platform and now there’s a new $50 speaker to take its place. The new speaker promises double the bass (which, to be fair, was pretty lacking) and adds the option for a wall mount. A new chip inside allows the speaker to perform some commands on the device rather than reaching out ot the cloud, which should speed up its responses.

The revamped Google Wifi system now uses two types of devices. Router sends out the signal, while the Point extends the range. It promises faster performance than the predecessor, which Google says was the best selling router overall in 2019. The Point now has a full-fledged smart speaker built-in, which brings the Assistant even closer to the overall WiFi experience.

We’ve known about Pixel 4 for a while, but now we’re officially getting the lowdown. The presentation starts talking about radar. Pixel 4 is the first smartphone to use radar, which it claims provides the fastest secure face unlock feature on a smartphone. it also enables gestures, so you can turn off your alarm by waving your hand instead of tapping. The phone will also detect when you’re nearby. Google says all of the radar data is processed on the device and isn’t shared.

The Pixel now runs more of its Google Assistant operations directly on the device without having to reach out to the cloud. That will speed up some requests that don’t need outside information to handle. If you say “Hey Google, how do you keep my data safe?” it will give you a rundown of the privacy features it offers.

The Pixel 4 starts at $799 and it will have a 90 Hz screen, which means it will refresh faster and look smoother when you scroll or play games. That’s a big deal.

Google is giving the Pixel 4’s camera its own segment during the presentation. Google is still using HDR+, which takes up to 9 pictures every time you push the shutter and combines them together so you can pull up shadow detail without blowing out your highlights.

Pixel 4 has a 2x telephoto lens that it combines with its digital zoom tech. This is all pretty familiar so far. “Wide-angle can be fun.” Marc Levoy taking a shot at Apple’s iPhone 11 super-wide-angle lens.

The extra lens adds depth information, which Google says can add functionality to portrait mode so subjects can stand farther way and it works on larger objects like a motorcycle.

Dual exposure sliders let you control how much HDR effect you get in your photos. This is a welcome change that allows for more control in scenes. Google has put an emphasis on night sky photography showing stars and the Milky Way. The examples look great, but it’s such a limited use case. Even if you don’t mind putting your phone on a tripod for several minutes to get a shot, finding skies dark enough to actually get a shot that looks impressive is tough.