What is Apple’s Spatial Audio?

Apple Music’s Spatial Audio promises you an immersive experience. But does it deliver? 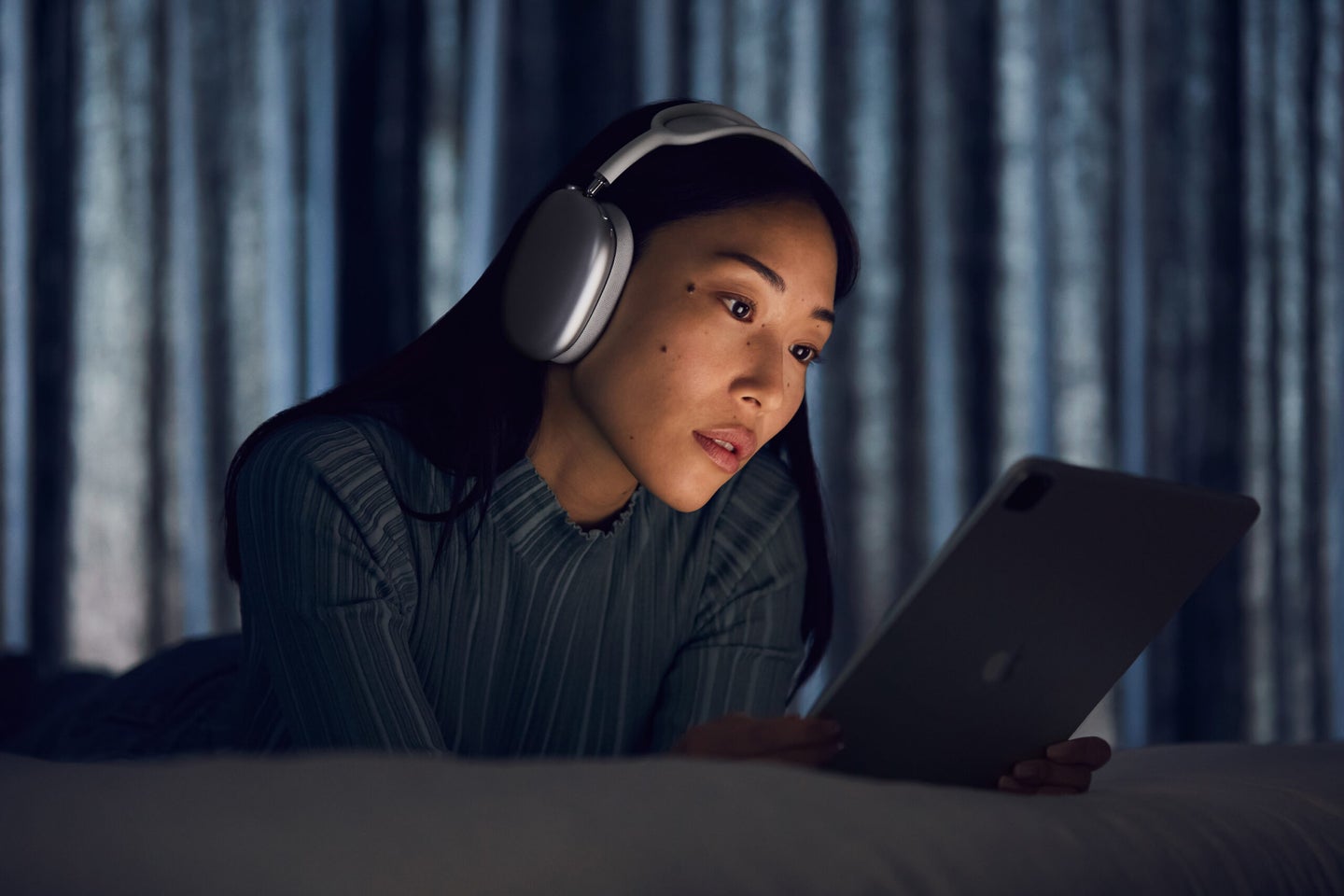 In October 2001, when Apple launched the original iPod, the pitch was simple and clear: Pick 1,000 songs, put them in your pocket, and take them anywhere you want to go. In June 2021, when Apple Music launched Spatial Audio, the pitch was far less straightforward: Sort through the seemingly infinite music in your pocket, locate some compatible tracks, and let them take you somewhere you’ve never gone before.

So what is “Spatial Audio”—how can audio be 3D? Is this supposedly multidimensional experience worth paying to subscribe to a specific service? Do you need specific gear to try out virtual surround? Let’s take a look at these questions and more.

Space is the place

In its marketing blitz, Apple likened Spatial Audio to the leap from standard definition to 4K video, but that analogy falls, well, flat(screen). It’s really better to call it what it truly is, which is a way to simulate the movie theater experience we’ve come to know since the introduction of the Dolby Atmos and DTS:X formats in 2012.

Before that point, theaters typically projected sound in a 7.1 setup, positioning channels at the front left and right, center, surround left and right, and rear left and right (all of it augmented by a bass channel). Taking it a big step further, Dolby Atmos, for example, lets sound engineers mix isolated audio for up to 128 “objects” routed to 64 speakers lining the walls and ceiling. This ability to map and maneuver dialogue, effects, soundtrack, etc., enabled an enhanced sense of depth, width, height—conjuring up audio that seems to originate from anywhere in a 360-degree bubble.

Without satellite speakers available, headphones use digital filters to adjust how sound bounces into your ear, tricking your brain into thinking the music is coming from throughout a 3D space when it’s still just two drivers strapped to your head. Now the same tech that lets you feel the impacts and emotions as the Avengers battle across the screen may let you feel like you’re in the studio with Black Sabbath as they’re recording “Iron Man.”

Despite the Apple Music branding, Atmos provides the true foundation of Spatial Audio—its directional not-so-secret sauce. None of this is new. Apple already enabled Spatial Audio on the AirPods Pro earbuds in 2020 to take advantage of compatible video services like Apple TV+ and Disney+.

There was music mixed in Dolby Atmos previously released outside of Apple’s streaming services (on Amazon Music HD and TIDAL, among other places). The difference is that now the ability to render Dolby Atmos is baked into the Apple Music pipeline, and iOS 14.6 in general (for use in FaceTime calls, among other places). It’s going to be a seamless transition for millions, for better or worse.

So, how do I try out Spatial Audio?

It may seem obvious, but the first thing you have to do is subscribe to Apple Music (or start a free trial). And a basic plan is all you need; unlike some competitors that tie features to more expensive tiers, Spatial Audio is included for all Apple Music subscribers. Then, to get things working, go play some music. Locate the Spatial Audio tile in Apple Music and pick a playlist or album that looks enticing.

Apple Music users with an iPhone or iPad and either Apple AirPods Pro earbuds or AirPods Max headphones, as well as some Beats models, may not notice anything…until you do. If your personal audio gear contains one of Apple’s H1 or W1 chips, Apple Music has flipped the switch on its optimized decoders so any Apple Digital Master mixed in Dolby Atmos will unfurl automatically.

While the original announcements weren’t particularly clear about compatibility, Spatial Audio isn’t restricted to Apple hardware. If you want to try it on third-party earphones and/or headphones, you just have to opt in by scrolling through the Settings to Music and digging into the Music panel. You’ll see a section under “Audio” marked “Dolby Atmos.” Just change “Automatic” to “Always On” and you’re golden (conversely, turn it to “Off” if you’re just not feeling things).

One thing you will miss out on, however, is head-tracking. AirPods Pro and Max leverage their gyroscope and accelerometer to trace motion, letting you move your head around a soundfield that seems anchored to your source in the real world. Currently, this works with video, but it’s coming to Apple Music and it does enrich the experience. So even though any headphones can play Spatial Audio, you’re not necessarily getting the exact same experience without investing in Apple’s tightly integrated ecosystem.

Will I be able to tell if a track is in Spatial Audio, and do I want to?

At launch, Apple said there were thousands of tracks available in Spatial Audio, with more to be added daily. Whether that includes your favorites is currently a crapshoot. The simplest proof that a track is in Spatial Audio is that it will display a “Dolby Atmos” badge on the “Now Playing” screen.

It’s important to note, an album page will only show the badge if the entire album is in Spatial Audio. If you download a song with Dolby Atmos listening enabled, it will automatically save the Spatial Audio version; however, if you previously downloaded a song that is now in Spatial Audio, you will need to redownload it to get that version.

Once you land on a Spatial Audio track, the actual effect isn’t hard to recognize. In its pitch for Spatial Audio, Apple promotes the format’s ability to deepen the emotional connection between artist and fans, but the first thing you notice with Spatial Audio is distance. The air that Spatial Audio lends to a mix is impressive or off-putting on a track-by-track basis. “Tom Sawyer” by Rush takes full advantage of echoes and ebbs without sounding dulled. But in “What’s My Name Again?” by blink-182 the tightly wound mix and positive distortion giving the song its presence are lost, leaving the vocals sounding muted rather than accented. “What’s Going On” by Marvin Gaye already occupies rarified air and loses its pained beauty without Gaye’s voice up front in the mix, forcing you to face his anguish. “Black Skinhead” by Kanye West, meanwhile, SLAPS. It sounds huge, hungry, like it’s going to consume you. This is the kind of mix that immediately demands attention and sells the format. One of the biggest overall genre winners is classical, which has always benefitted from the ability to capture expanse and positional interchanges. The nuances of jazz are a close second.

If you grew up in the stereo age, Spatial Audio is an interesting contrast that’s fun but not essential. With the ability to export Atmos mixes coming to Logic Pro, however, a new generation of producers could tap the format’s potential and make this the compelling norm.

What are the “Lossless” and “Hi-Res Lossless” badges that showed up with Dolby Atmos?

On the same day it went 3D, Apple Music gave users another free upgrade: uncompressed audio. Up until that point, everything listened to through Apple Music was delivered as a 256kbps AAC, a lossy format similar to MP3 that saved data but sacrificed fidelity. With the rise of 5G and more and more unlimited plans, phones can handle the full spectrum. Apple Music’s catalog already filled up servers in ALAC (Apple Lossless Audio Codec), so 75 million tracks are finally able to stream in CD-quality Lossless (16-bit/44.1kHz) or Hi-Resolution Lossless (various resolutions up to 24-bit/192kHz).

Does this matter to most users? No. While Lossless is natively supported on Apple devices, its quality gets lost immediately if you’re using Bluetooth earphones or headphones (better find that corded pair). And Hi-res Lossless requires an external digital audio converter plus cables cables cables. Still, for anyone old enough to remember what cassettes or VHS tapes were like, a first-generation copy sure beats a dub of a dub of a dub. Lossless Audio, and especially Hi-res Lossless, is niche for now but a welcome addition and well worth the price of admission at the added cost of nothing.

Didn’t Sony do something similar?

If you’re just not interested in Apple products but want to experience a more spacious sound, there’s another option: 360 Reality Audio, launched by Sony in October 2019 to seemingly less fanfare. Currently a higher-tier feature for 1000 or so songs on the TIDAL and Deezer streaming services, as well as the prime vehicle for enveloping live concerts on nugs.net, 360 Reality Audio uses its own platform built on the MPEG-H 3D Audio standard to achieve a similar object-based effect as Dolby Atmos. Like with Apple Music, any headphones can play 360 Reality Audio, but using Sony’s more recent headphones (like the WH-1000MX4) can take advantage of an app feature that uses test tones to analyze your ear to optimize the way sound maps to your personal listening experience. A brief spin through some Metallica and Pearl Jam live shows showcased an effective headphone virtualization technology that helped get the band more “outside my head,” spreading them out and wrapping the crowd around.