“I had the opportunity to witness climate change firsthand and it changed my life.” 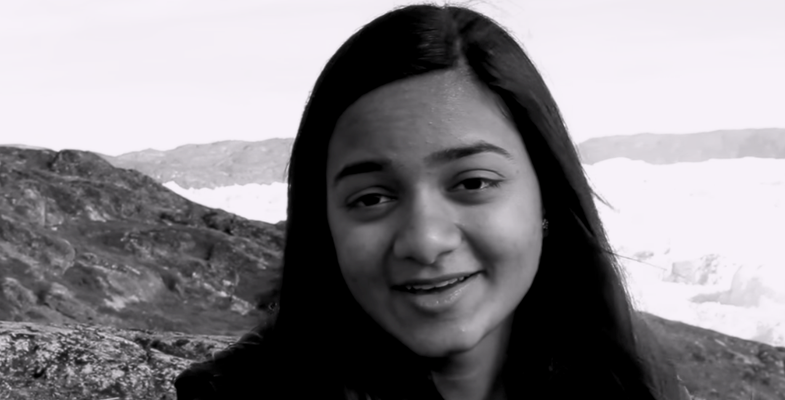 There’s a moment in Maya Burhanpurkar’s documentary where she stands next to an ice fjord in Ilulissat, Greenland, realizing what climate change means for the people who live there.

After listening to residents describe how fast the ice is melting, the 14-year-old student from Ontario, Canada looks into the camera and says:

“I think that I’m going to become a lot more conscientious of the environment when I go about my everyday life because after what I’ve seen today, the icebergs and now the ice fjord, I really don’t want that natural landscape to be destroyed. Every single person counts.”

Melting ice changed Burhanpurkar’s life and now she’s inspiring others around the world with a documentary about climate change.

The film’s title, 400 PPM, refers to the concentration of carbon dioxide in the atmosphere, which now exceeds 400 parts per million, the highest level seen in the history of our species. Since the documentary’s release and Burhanpurkar’s high school graduation this year, atmospheric carbon dioxide levels have continued to climb.

Burhanpurkar’s eye-opening voyage happened when she was invited to tour the Canadian and Greenlandic Arctic aboard the Sea Adventurer. It was one of the many honors bestowed on her after she won Canada’s National Science Fair twice and representing Canada in the Intel and Google Science Talent Search Competition.

It’s impressive enough that this teenager turned her trip into an acclaimed documentary. But that’s on top of her previous achievements prototyping “intelligent antibiotics,” discovering new properties of a drug to cure Alzheimer’s disease and tracking asteroids.

“I have a scientific background,” Burhanpurkar explained. “I’d never done anything creative like this before. It’s not really my forte.”

Burhanpurkar made a storyboard and enlisted contacts from other projects to teach her about filmmaking techniques, while friends helped with the editing and production.

400 PPM debuted online in November last year and the reception was “absolutely fantastic,” Burhanpurkar said. She heard from viewers as far away as Latvia and China. Friends across Canada told her they watched her video in science class.

Recently, Burhanpurkar was among the recipients of the Gloria Barron Prize for Young Heroes for her work on the documentary, which has reached more than 2.2 million students.

“In school we learn facts and figures and that it’s going to impact us at some point,” Burhanpurkar recalled. “This could not be further from the truth.

“The Arctic is where global warming is changing our planet the fastest,” she explains. “It’s the canary in the coalmine. It’s the Earth’s early warning system and its alarm is going off. We need to act now.”

Upon returning home, she realized that her peers knew as little about climate change as she had before visiting the Arctic.

“Climate change felt like more of a buzzword than something that required action,” she said.

Several of her classmates were stumped when she asked them about climate change — or they supplied simplistic vagary.

“Before I went, I was excited to do the whole ecotourism thing,” she said, “but what struck me was meeting the people who are already impacted by climate change.”

Between stopping in communities in Greenland and Canada, Burhanpurkar saw her first polar bear, seal and walrus, stood near glaciers, icebergs and ice fjords.

Farther north, in Uummannaq, Greenland, Burhanpurkar observed that climate change was hurting the Inuit people along with the ice. Thinning glaciers have made ice fishing nearly impossible, devastating the economy and changing the traditional culture.

“It was hardly their fault,” she narrated. “It was ours.”

Burhanpurkar will take her new awareness with her when she begins college at Harvard next fall.

“I had the opportunity to witness climate change firsthand and it changed my life,” Burhanpurkar said.

See the entire documentary below.