The giant teeth can reveal clues about pollutants in the Narwhal's diet. 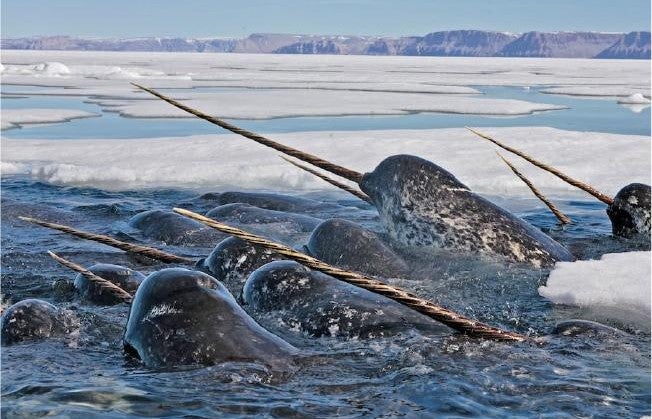 The tusk of a narwhal, a dramatic spiraled tooth that can extend up to ten feet long, holds important information about a fast-changing Arctic, a new study has found.

The study, published on March 10 in the journal Current Biology, analyzed stable isotopes and mercury concentrations in ten narwhal tusks. The authors—led by Rune Dietz, a conservation biologist at Aarhus University in Denmark, and Jean-Pierre Desforges, a postdoctoral researcher at McGill University—found that both the narwhals’ diet and their exposure to mercury changed considerably between the years 1960 and 2010. The scientists surmise these shifts are related to the effects of a warming planet.

Narwhal tusks grow a little bit each year and because they are connected to the bloodstream, they can point to changes in the animals’ diets. By analyzing these giant teeth, researchers can glean timed physiological information—kind of like tree rings, coauthor Desforges says which scientists use to learn about historical variations in climate. The tusks, which were collected from Inuit subsistence hunters in northwest Greenland, in some cases belonged to animals that were over 50 years old, allowing researchers a wide breadth of historical data within a single sample.

Stable isotopes of carbon and nitrogen “are essentially used as dietary proxies to tell us something about what species the animals are eating,” explains Desforges. “But also we can look at pollutants like mercury, because this can be deposited in the teeth as well.”

The team’s findings suggest that before the 1990’s, when sea ice levels were consistently high, the narwhals were probably feeding on arctic cod, which thrive in sea ice environments, as well as fish like halibut, which are higher up on the food chain. After 1990, as the sea ice began to decline, the data indicate that the narwhals switched to different prey, lower on the food chain. It’s just a correlation, Desforges says, but “the observed themes that we see seem to match very well with the changes in the natural environment.”

As humans continue to heat up the planet, we’re losing Arctic sea ice at shocking rates. That sea ice, which traps a lot of nutrients, is tightly wound into the Arctic food web: Sea ice nutrients feed the plankton, who feed the fish, who feed the seals and whales, who feed the polar bears, and so on. The loss of sea ice can disrupt which species live where, and who eats what. And because more toxins accumulate the higher up you go in the food chain (a process known as “biomagnification”), when there’s a change in the ecosystem, “there’s a chance for that to alter the way that contaminants move in the food web,” Desforges says.

Mercury, a naturally-occurring metal and neurotoxin that’s been spewed out at unsafe rates by extractive processes like mining, is all over the Arctic. The authors found that mercury levels in the narwhal tusks increased between 1962 and 1990, probably a reflection of the higher mercury levels of the fish that the narwhals were eating, and the way toxins build up in animals’ bodies with age. “The surprising thing was after the 1990s and the 2000s”—when the narwhals started eating fish lower down on the food chain, which should mean less mercury—“we actually see mercury levels rise, and not only rise above what we expected, but at a greater rate than any other time in our time series,” says Desforges.

The authors speculate that this unexpected spike is related to more mercury pouring into the environment, climate-related changes in the food web, or both.

“We’re dealing with multiple stressors of change, and this study is showing the cumulative impacts of that,” says Lisa Loseto, a research scientist at Fisheries and Oceans Canada who was not involved in the study. This research is “considering climate change and contaminants together, and what one species is having to deal with in the Arctic—the place that’s enduring the most change.”

The study’s findings are “a call to action,” says Loseto, that “we need to look at our impacts on wildlife in the Arctic.”