The terrifying new climate change report has one silver lining

There is still time to push for a better future. 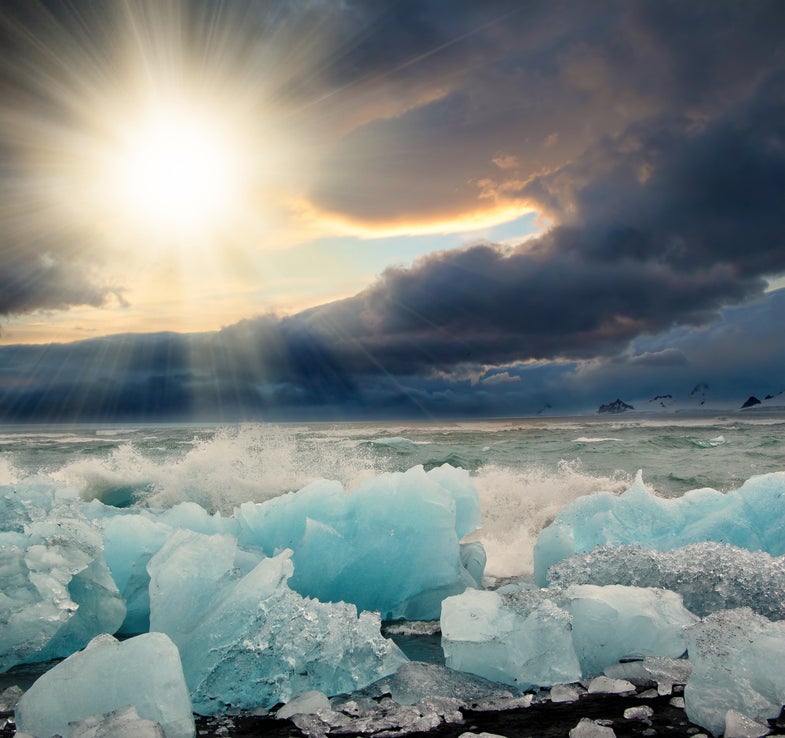 You’ve seen the headlines: scary cries about an impending climate apocalypse that’s headed our way sooner than once thought. When the Intergovernmental Panel on Climate Change (IPCC) released its latest report last week, its somber message—this is our last chance to get real about the changing climate before it’s too late—caught the world’s attention.

In a way, the report, with its gloomy proclamations on the end of the world as we know it, is peak 2018. Dramatic and desperate, it paints a picture that’s hard to envision: a world in which sea ice vanishes completely once every decade, coral reefs disappear entirely, and the world’s poorest and most vulnerable people bear the brunt of the climate disaster.

But before you walk into the rising sea, take a deep breath and look at the surprising bright side. The report actually contains plenty of good news. At its core is a positive message: we can stop a climate catastrophe right now. Here’s how—and why.

The weighty report, written by scores of international climate scientists, relies on more than 6,000 scientific studies. If you’re up for a lighter take, there’s a 34-page top-level report designed for policymakers.

TL;DR. What do I need to know?

Here’s the report in a nutshell: Sooner than previously thought, humans will have warmed the planet by a whopping 1.5 °C since the Industrial Revolution began. The consequences of that rise will be massive—but they’re still way better than the side-effects of a 2 °C rise.

You’ve probably heard that number before. With the Paris Agreement, the majority of the world agreed to try to keep temperature rise at or below 2 °C this century, but aim for even less warming. (In June 2017, President Trump withdrew the United States from the agreement.)

Is it really possible to rein in warming?

In a briefing on the report, a UN official said it’s “feasible within the limits of physics and chemistry” to keep warming below one-and-a-half degrees Celsius.

But to keep warming to just 1.5 °C or less, the report’s authors say, the world must take serious action by 2030. The effort to tackle climate change must be massive, concerted, and sustained to keep warming below that critical threshold.

As surprising as it may seem, the world does have a bit of wiggle room left when it comes to those troublesome greenhouse gas emissions. Think of our carbon output as withdrawals from the world’s wallet. The globe has very little left in the kitty—if carbon emissions were cash, we’d be on the verge of bankruptcy, otherwise known as an irreparably altered climate . Now we have to figure out how—and if—to spend the last few pennies we found in the couch cushions.

How much climate “cash” is left is the subject of great debate. For a two-in-three chance of successfully avoiding over one-and-a-half degrees of warming before 2030, the IPCC estimates that the world would need to emit no more than 570 billion tons of carbon. The chances go down from there: Emit 770 billion tons, and you’re down to a fifty-fifty chance. And if the world emitted 1,080 billion tons, we’d be down to a one-in-three chance of successfully limiting warming.

Okay, so we have some runway still. But is it really possible to put on the brakes?

The physics and chemistry of climate change will remain the same regardless of how much we emit. When we emit carbon dioxide—mostly by burning fossil fuels like gas and coal—most of it gets trapped in the atmosphere, where it absorbs infrared light from the Sun. As a result, the atmosphere and the world below warms.

Carbon sinks, like forests and oceans, absorb some carbon dioxide and other greenhouse gases. But as the planet warms, these sinks become less and less effective. Because of a warming atmosphere, Arctic ice melts, sea levels rise, warm spells and droughts become more common, and weather gets more extreme.

How long do we have—and how much carbon dioxide can we emit?

Last year, the world emitted a combined 32.5 billion tons of carbon dioxide. If we kept emitting that much every year, we’d burn through our best-case-scenario budget by 2036. That’s not a lot of runway, especially given the significant uncertainty of those budget targets. And it’s not like we can get a new job and earn some more greenhouse gas leeway—once our budget is gone, it’s gone forever. It makes more sense to cut carbon emissions drastically, reduce or eliminate our reliance on fossil fuels like coal entirely, and sidestep the horrible outcomes of even a 1.5 °C rise in temperature.

The idea of a carbon budget is controversial, and since climate systems are so complex, it’s an admittedly oversimplified way to think of climate change. But the message is clear: The less greenhouse gas we pump into our atmosphere, the less likely we are to trash our home. We’re not on track now, but if we’re willing to change our behavior, we can change the planet’s fate.

Haven’t I heard this before?

If that sounds mighty familiar, it should. It’s what climate scientists have been saying for decades. “Science foresaw the change in temperatures and climate that we are seeing now decades ago,” says David Archer, a professor in the University of Chicago’s department of geosciences and the author of multiple books about climate change. “If you make a prediction in advance and it happens, that’s credibility.”

How will this all play out?

There isn’t one sure-fire way to limit warming to one-and-a-half degrees, and it’s not certain how things will play out once we do reach that threshold. The IPCC focuses on two scenarios: one in which the global temperature stabilizes around one-and-a-half degrees higher than it is now, and another in which we hit that threshold around the middle of this century, exceed it, and manage to rein in the temperature by employing carbon capture technologies and creating lots of new carbon sinks.

How realistic is it to reel back warming if we pass the one-and-a-half degree threshold?

Scientists like Archer warn against that second scenario. If the earth warms more than the new, lower target, runaway ice melt and other scary phenomena could ensue, making it hard if not impossible to rein in warming. “An overshoot is a really dangerous thing,” he says. “Once you trigger that, you can’t stop it.”

Wait, how is this good news?

Putting the brakes on the planet’s high-speed race toward the unknown won’t be easy: It will take an enormous, coordinated effort and require us to change our behavior on a personal, political, and global level. But, says Lauren Feldman, an associate professor of media studies at Rutgers, optimism is key. “When it’s just a steady stream of fear and doomsday scenarios, people tune out,” she says.

What can I do to help?

People are more motivated by calls to action than cries of woe, says Feldman, who studies how the media affects individuals’ attitudes about climate change. That means it’s important to highlight how individuals can make a difference.

First, there’s plenty people can do at home. The IPCC recommends choosing foods that require less land to cultivate and produce fewer emissions—think more local, seasonal foods and less meat and milk. Reducing food waste can help, too, as can drying your laundry on a clothesline and working from home.

You can vote with your wallet, too, choosing energy-efficient appliances, green building materials, ditching airplanes whenever possible, and mass transit. By pressuring big companies to both produce more energy-efficient products and reduce their own contribution to climate change, you can help reduce overall greenhouse gas emissions.

And don’t underestimate your political power, either. Your state and local governments make important choices about everything from public transportation to flood mitigation and farming—all issues that can reduce emissions and fossil fuel consumption and help adapt to a changing climate.

Not enthused about the federal government’s changing environmental policies and withdrawal from the Paris Agreement? You can influence politics at the federal level by funding candidates with environmentally friendly policy platforms, pressuring your representatives to halt the nation’s withdrawal from the Paris Agreement, and voting for representatives—and presidents—who are willing to act with the rest of the world on climate change.

Confronting the enormity of climate change—and the huge detour we’re going to have to take to stop it—can be scary. But as a planet, we’re in control of our own destinies. That’s very good news… if we’re willing to rise to the challenge. “This is really bad, but it doesn’t have to be as bad,” says Archer. “The story has yet to be written.”