Scientists now have a better idea of just how much microplastic reaches the Arctic. It's a lot. 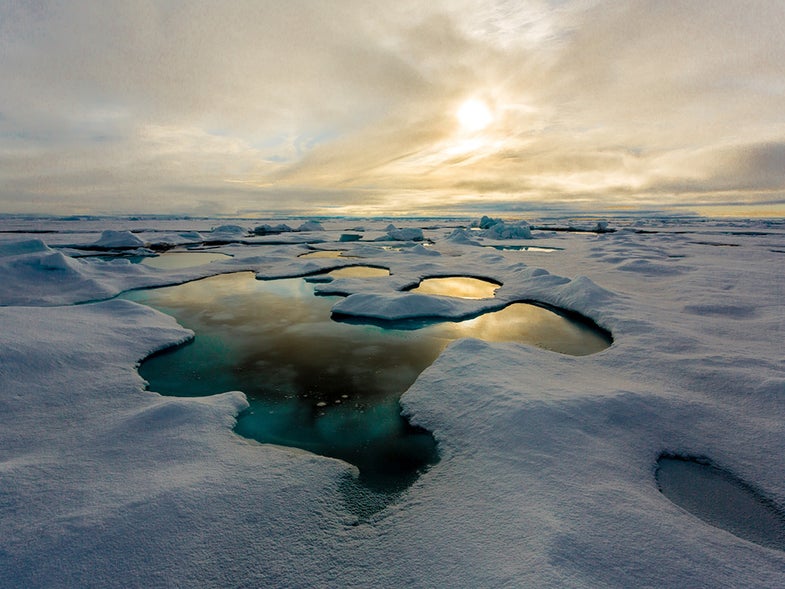 A new study from researchers at the Alfred Wegener Institute in Germany found that microplastic—tiny chunks only a few micrometers long that are easily ingested by animals and seem to spread everywhere—now contaminates Arctic sea ice at an unprecedented rate. While alarming, this finding comes as no surprise to those who study ocean contamination. However, quantitative data about the level of sea ice contamination gives scientists a baseline measurement as we work to make things better. The study was published this week in Nature Communications. Its findings highlight “just how pervasive this type of pollution has become in every last corner of our planet,” says study author Melanie Bergmann. The researchers found extremely high concentrations of plastic in their samples—up to 12,000 particles per liter of sea ice, or about 45,000 particles per gallon. Much of it was polyethylene, she says, which likely comes from single-use packaging. That means this study provides some clear recommendations: “We really ought to reduce its production to reduce leakage to the environment.”

In total, the team found 17 kinds of plastic in the ice samples they gathered from the Arctic Ocean. The most common six included packaging materials, cellulose acetate from cigarette filters, paints, and nylon. The researchers believe some of these materials are carried up into the Arctic by currents from more southerly locations, including the infamous Great Pacific Garbage Patch. Others, such as nylon, are likely from fishing nets and other materials related to boats fishing for Arctic cod. As climate change causes sea ice in the Arctic to become more navigable, fishing activity has increased.

“These tiny particles… can be taken up by almost all organism classes,” Bergmann says. Although their exact effects on wildlife still aren’t fully understood, they may cause animals to eat less because their stomachs are crowded with plastic, thereby affecting their survival rates. They may also poison animals and affect their fertility.

“We know that the Arctic is undergoing fundamental changes, many of them because of climate change,” says the University of Waterloo’s Philippe Van Capellen. Because of its remoteness and other factors, Arctic ecosystems still aren’t as well-understood as those of more temperate regions, he says, making these kinds of quantitative studies vital to establishing a baseline of Arctic health for policy-makers to work from.

Van Capellen, who is also the Canada Research Chair in Ecohydrology, was not involved in this study. However, he’s glad to hear it was done: “It’s the type of data that we need to really understand the sources and transportation of plastics and microplastics in particular,” he says.

In order to capture data about the kinds and quantity of plastic found in sea ice, the AWI researchers looked at ice core samples they took on polar expeditions in 2014 and 2015. They used a spectrometer, which analyzes reflected light to determine a sample’s composition using each substance’s “optic fingerprint.” They found that the plastic evidence in each layer of the ice flow changed depending on where it had been. These big chunks of sea ice travel the Arctic, pushed by currents. They’re increasingly mobile as the Arctic sea opens up due to climate change, which means that they can carry microplastics from one side of the Arctic to the other, where they melt, scattering the foreign fragments. Some settle on the seafloor, and some are picked up by the current, heading back into the sea.

“It just shows that this is a global environmental issue,” Van Capellen says, and requires a global response. “We have to turn off the tap now” on plastics production, particularly of extraneous single-use packaging, writes Bergmann. “There is no time to lose.” Large plastic objects already in the ocean will fragment into microplastics over time, she says, so there’s no time to waste in stemming the tide of new debris.

Like microplastic fragments in the belly of an Arctic cod, evidence of this issue is accumulating, Van Capellen says, providing proof “we really need to look for political action.”