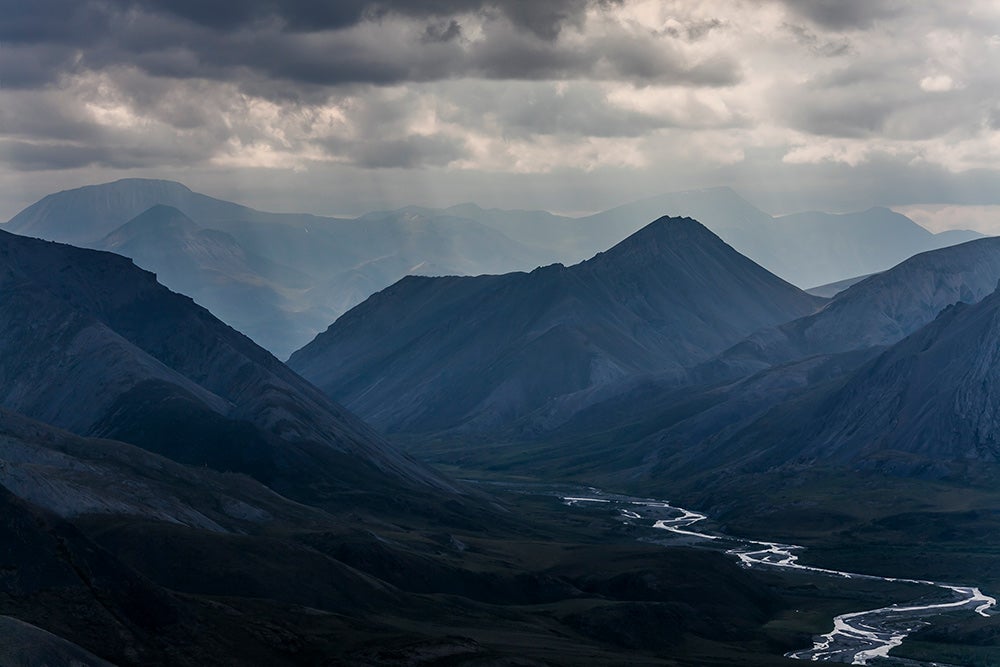 The Arctic National Wildlife Refuge is the largest swath of undeveloped land in the United States—a pristine frontier boasting unparalleled biodiversity and natural beauty. Protected by law for decades, the region is now at risk. And surprisingly, a tax bill is to blame for its peril. The Tax Cuts and Jobs Act of 2017, greenlit by President Trump and Secretary of the Interior Ryan Zinke, could put 2,000 acres of ANWR land up for sale by summer 2019. “It is our responsibility to be good ancestors so all of our children can thrive,” says Adrienne Blatchford, an Inupiat woman who serves as the community organizer for the Native Movement Alaska advisory board. “And we have to respect that ANWR is one of the last untouched ecosystems in the world.” The tug-of-war for Area 1002 began in 1980, when President Jimmy Carter signed the Alaska National Interest Lands Conservation Act. Carter designated 8 million acres of ANWR as protected wilderness, officially banning gas drilling in the refuge. However, that same Act set aside Area 1002; 1.6 million acre of coastal plain that Congress could turn over to developers after various wildlife studies and oil and gas assessment surveys took place. Several presidents and Congresses have snuffed efforts to permit exploration in the area, and ultimately, arguments to prevent extraction exploration prevailed as government agencies such as the U.S. Fish and Wildlife Service (FWS) validated that the biological resources of this land are too valuable to sacrifice to development profits.

That changed in September 2017, when Republicans resurrected the idea to drill as a way to help pay for tax cuts promised by President Trump—hence the initiative appearing as a line-item in a bill regarding taxes and jobs. Now, because of the passing of the Tax Cuts and Jobs Act of 2017 and loopholes in the protection status of Area 1002, the most pristine and sensitive ecosystem in the entire Arctic National Wildlife Refuge is facing down more than just an empty threat. According to one title in that very large bill, the Congressional code banning leasing and oil drilling development in the ANWR is nullified for Area 1002; the lease sale “shall” happen; each lease will sell off at least 400,000 acres of refuge land; and, Secretary of the Interior Ryan Zinke “shall” establish land easements in other areas of the refuge inside and outside of Area 1002, which allows oil and drilling companies the legal right to use the land for a specific, limited purpose—regardless of refuge status.

Currently, advocacy groups, scientists, and citizens all across the country are taking advantage of a BLM public comment period that closes June 19. This comment period allows anyone to express support or opposition of drilling in ANWR.

How can a Congressional bill protecting a wildlife refuge be voided by a line item in another bill?

“From a legal standpoint it’s far from clear whether the flat dash method is even lawful,” says Peter True, press secretary for Senator Maria Cantwell, ranking member on the Senate Energy & Natural Resources Committee. “That bill didn’t change the purpose of the refuge in law from being designed to protect wildlife. What it did do is slap on another purpose which is in direct opposition of the initial laws concerning this area.”

However, the Department of the Interior and the Chamber of Commerce are looking for support for oil and gas development in Area 1002. The senior Vice President of the Chamber of Commerce addressed both the majority leader (Senator Lisa Murkowski, a strong supporter of Area 1002 development) and ranking member (Senator Cantwell, a strong opposer) of the U.S. Senate Committee on Energy & Natural Resources in a letter requesting them to “favorably report” the lease sales to support the dying Trans Alaska Pipeline System.

Since, Senator Murkowski has favorably reported and vehemently supported lease sales from the chair positions of the Committee on Energy & Natural Resources. This is unsurprising, since she also authored the title within the Tax Cuts and Jobs act to open Area 1002.

“We had no greater victory over the past year than in our fight to open the 1002 Area of ANWR,” Murkowski said in a press release on June 1. “We need the jobs, the revenues, and the security that new production will provide. That’s why we have worked so hard to put a plan in place to refill TAPS for another 40 years. But we also have to defend the gains we have made. We have to tell our story. We have to prove, again and again, that we will protect wildlife and the environment.”

What the U.S. stands to lose

Research from the National Bureau of Economic Research states that ANWR protects a broad spectrum of arctic and sub-arctic habitats that are, according to the FWS, “unparalleled in North America.” These habitats support a number of large animal and bird species, which has led observers to remark that ANWR is ”America’s Serengeti” and one of the ”Last Great Wilderness Areas.” ANWR plays host to an impressive collection of wildlife; 42 fish species, 37 land mammals, 8 marine mammals, and over 200 resident and migratory bird species make it one of the most diverse areas in the Arctic, with several notable species including polar bears and musk oxen. The lack of human interference, says Steve Arthur, the principal biologist for the Arctic National Wildlife Refuge, allows scientists to use the region as a sort of natural laboratory; they can see how various wildlife behave and interact in pristine conditions, which helps conservationists understand the implications of industrial interruptions on a landscape.

The Refuge is also home to one of the few caribou herds left in the world, and the largest in North America. The Porcupine herd is comprised of roughly 200,000 caribou, which migrate yearly across the six distinct ecological zones of Area 1022. According to Arthur, their migration routes are roughly 300 to 350 miles long from winter to summer.

“In the course of their annual migrations they’re using everything from the Royal Forest in the southern part of the Refuge, all of the mountains, and then the coastal plain where they do most of their calving,” Arthur said during an interview with documentary producer Zeppelin Zeerip for an upcoming film chronicling the controversy of public land sales in the U.S. Undoubtedly, the most important and sensitive destination during the migration pattern is the coastal plain—they calve there because of the lack of predators and rich vegetation—which is where drilling leases are now proposed.

Caribou herds are exceptionally sensitive to changes in their environment. According to the U.S. Fish and Wildlife Service, structures such as highways, pipelines, and road systems may deflect caribou movements, and reduce their chances for survival. The Alaska Department of Fish and Game reports that intensive oil field development may result in virtual abandonment of calving areas. Such displacement apparently has occurred in response to industrial growth near Alaska’s Prudhoe Bay—the largest oilfield in North America.

In some instances, roads and pipelines can be constructed in ways that reduce problems for caribou, such as including ramps to direct the animals over a road, or burying sections of a pipeline to give herds a place to pass over. But even if someone makes those considerations, the modifications don’t always work.

A close relationship with imperiled caribou

Scientists’ greatest source of knowledge on caribou migration—how it’s changed historically, which will inform how it might change in the face of industrial invasion—comes from the native Inupiat and Gwich’in tribes, whose oral histories and bone collections have allowed researchers to date caribou behaviors in the ANWAR region back nearly 12,000 years.

“One of the limitations of wildlife studies is that we tend to look at a fairly narrow window of time,” Arthur says. “Working with the local communities and the residents that have been living up here for many generations, [we’ve found] there’s a tremendous amount of knowledge that has been passed down word of mouth, basically, from fathers to sons and so on, and by tapping into that knowledge, we’re able to extend our view of the natural world back several generations at least.”

“The caribou is more important to the Inupiat and Gwich’in people than simply being a food source,” he continues. “It truly is the basis of their culture. It shows up in religion and just all kinds of cultural connections that they have with the animal. This is a society that’s been here in Alaska for longer than the U.S. has been in existence. They’re very sophisticated in their relationship to the land. This is knowledge that they’ve gained over many, many lifetimes, and they’re very good at it.”

Through tribal knowledge and history, researchers have been able to locate more concrete pieces of evidence—such as caribou fences built centuries ago—and project changes in behavior on the adaptation and survival of the herd with a long-sighted view. “By looking at that kind of information, we can interpret the data that we’ve collected over the last couple of decades and see that we’re looking at something that’s a fairly recent development [and seeing how that] compares to a long-term picture,” Arthur says.

And in addition to having an unrivaled view of how the caribou might react to drilling in ANWR, these indigenous groups may also have the most to lose.

“There has been a shift in our ecosystem, the warming of the ocean, a change in acidity levels, increases in wind and heat systems that cause cold fronts to be harsher and longer, the melting of permafrost has caused methane emissions, there are drunken forests, a depletion of sea ice—we see it all,” Blatchford says. “With this shift in the ecosystem, the lives of the people that rely off the land are also disrupted. Because of the high cost of living and the lack of jobs in these remote communities, access to the food is a part of our survival. Our genetics demand that our diets be that of the land and what it provides. We cannot survive off of processed and foreign foods—western medicine and science has proven that.”

“Plus, a gallon of milk at a small store in our village is $11,” Blatchford adds. “We don’t have a choice to adapt when we cannot afford to.”

But what about the economy?

It is not clear whether leasing in Area 1002 will benefit the economy in the long term. The trajectory set by lease sales determines the amount of economical revenue that the U.S. will see over the next nine years, but does not explore what the impact of the bill will be on the economy or the worth of biological resources after the initial spikes of profit generated by the lease sales. The reason that the GOP Tax Reform includes even a mention of ANWR is because the Trump Administration tasked the Senate Energy and Natural Resources Committee with achieving at least $1 trillion in savings over the course of 10 years. In turn, the Tax Cuts and Job Act was able to achieve that $1 trillion benchmark by the committee allowing oil and gas drilling in Area 1002—which is located in committee chair Senator Lisa Murkowski’s home state. Murkowski did not respond to request for comment before publication.

It’s equally difficult to project exactly how damaging the leasing plan will be. Although Alaskan politicians have promised that ANWR extraction development would only affect “2,000 acres” of land in the restrictions of the bill, the U.S. Fish and Wildlife Service formally rebuked that notion by releasing an official statement that reads, “even if a 2,000 footprint limit were written into a bill, it could be possible for facilities and their accompanying roads and pipelines to spread in a network throughout the entire 1.5 million acres of the 1002 Area.”

Lauren Steele is a freelance writer who left NYC for the American West. She focuses her work on the natural world and the human experience, writing for Vice, Rolling Stone, National Geographic Adventure, Outside, and The Wall Street Journal.