In a shocking turn of events, lightning strikes on Jupiter look a lot like our own

The lightning struck more than twice. 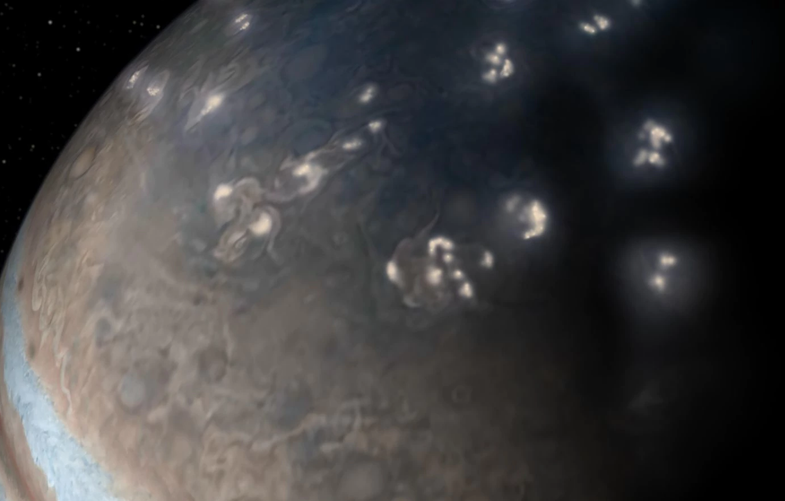 You’d be hard pressed to find an environment in the solar system more at odds with Earth than Jupiter. The gas giant that could fit 1,300 Earths inside of itself is an astrophysical embodiment of chaos, with an atmosphere teeming with cyclones, anticyclones (yeah, those are a thing), and hellacious storms of all kind. But it does share an unexpected similarity with Earth: a love of lightning. Thanks to findings collected by NASA’s Juno spacecraft and reported in a pair of new studies published in Nature and Nature Astronomy on Wednesday, we now know lightning in the Jovian atmosphere strikes about as much as it does on Earth, and in more or less the same sort of tune.

“The two studies reveal a more complete distribution of lightning on the planet from the unique vantage point of Jupiter polar orbit,” says Shannon Brown, a scientist at NASA’s Jet Propulsion Laboratory in Pasadena, California, and lead author of the Nature paper. “We have shown that lightning is frequent and occurs most in the polar regions. We also found a missing high frequency radio signature from the lightning.”

We’ve known for a while lightning exists on Jupiter—NASA’s Voyager 1 spacecraft first detected low-frequency radio emissions from the planet in March of 1979. Those “whistler” signals suggested the presence of lightning, and since then, other missions like Galileo and Cassini have observed optical evidence of scattered lightning occurring on the night side of the planet. According to Brown, however, those surveys were limited, and only about 100 instances observed over nearly 40 years. Moreover, while lightning on Earth emits broadly over the radio spectrum, those missions could only detect low-frequency signals, and high-frequencies were always elusive, creating suspicions lightning on Jupiter was different than it was on Earth.

Juno, which has been orbiting Jupiter since July 2016, filled that dearth of data. “Since Juno is flying 50 times closer to the lightning than the prior missions, we were able to detect these signals for the first time,” says Brown. The spacecraft’s Waves instrument tallied up a whopping 1,600 observations of low-frequency lightning strikes in the Jovian atmosphere, while the Microwave Radiometer Instrument recorded 377 lightning discharges across low and high frequency ranges. The researchers tracked peak rates of around four strikes per second, and one strike per square kilometer per year—on par with how lightning behaves here on Earth.

The new findings paint a better picture of the distribution of the lightning strikes on Jupiter, which should help scientists better understand atmospheric circulation, composition, and energy transport across the planet.

But more than that, the new lightning data also provides a better glimpse of where water clouds on Jupiter tend to form, and how they modulate and attenuate heat transfer throughout the planet. “It’s thought that lightning originates in convective water clouds,” says Brown, where warm air creates electrical charges in water and ice droplets that later discharge into a lightning strike. “So in this way, lightning is a tracer for mapping out the moist convection and associated energy transfer on the planet.”

This highlights the biggest difference in lighting between the two planets. Earth derives most of its energy from the sun, and that heat hits the planet hardest at the equator, where we also see the highest rates of terrestrial lightning strikes. Jupiter, instead, radiates twice as much internal heat as it grasps from the sun, and this heat is unleashed primarily through the polar regions, which, again, is where Juno detected the vast majority of lightning. Lightning on Jupiter, in fact, is actually absent at the equator—just as it is absent at the poles here on Earth. “It means that conditions for a formation of Jovian and terrestrial thunderclouds are probably very different,” says Ivana Kolmašová, a scientist at the Czech Academy of Sciences in Prague and the lead author of the Nature Astronomy study.

The work is far from over. “There are many lingering questions,” says Kolmašová. The team doesn’t know why the northern hemisphere exhibited twice as many lightning strikes as the southern hemisphere did, or why Juno found bupkis at the equator. The mechanism for how the Jovian thundercloud gets charged is unclear, as is how big the currents flowing in these lightning channels get. “Many mysteries remain and Juno might to help to reveal them during next 34 close approaches to Jupiter.” That seems like plenty of chances to find some answers.