The process is designed to be more environmentally friendly than traditional dyeing. 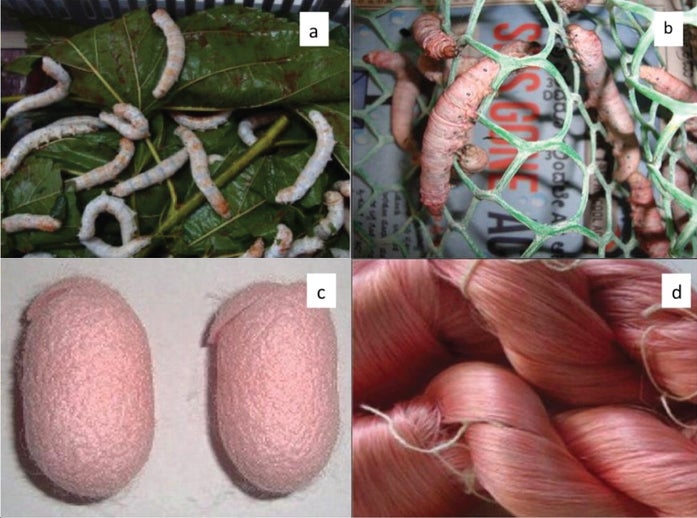 Brown cows may not actually make chocolate milk, but pink silkworms do produce pink skeins of silk, a team of scientists has discovered. To see if they could produce pre-dyed silk—silk that comes colored, straight from the source—the team fed ordinary silkworms mulberry leaves that had been sprayed with fabric dyes. Out of seven tested dyes, only one worked, producing a thread that reminded me of pink-dyed hair.

And yes, the worms themselves take on some color before they weave their silk cocoons. Their colorful diets did not affect their growth, the team, which included engineers and biologists from the CSIR-National Chemical Laboratory in India, reports in the journal ACS Sustainable Chemistry & Engineering. (The researchers didn’t look too deeply into how the dyes affected the silkworms’ health. After all, silkworms die when people harvest their silk.)

The team investigated dyeing silk this way because coloring fabric normally uses enormous amounts of fresh water. The water gets contaminated with dangerous chemicals in the process, requiring costly treatment before factories can dump it back into waterways—or wreaking havoc when factory owners dodge cleanup rules.

Dyeing silk directly by feeding silkworms would eliminate those water-washing steps. Scientists are just starting to study this idea, however, it remains to be seen if it’s commercially viable. In this experiment, the Indian team tested seven azo dyes, which are cheap and popular in the industry.

The scientists found different dyes moved through silkworms’ bodies differently. Some never made it into the worms’ silk at all. Others colored the worms and their cocoons, but the color molecules settled mostly in the sticky protein the worms add to their cocoons. That sticky stuff gets washed away before the silk is turned into fabric. Only one dye, named “direct acid fast red,” showed up in the final, washed silk threads. By the time it made it there, it was a pleasant, light pink.