The View from Up Here: Babies Learn Faster in High Chairs

Playing with those sweet potatoes again? Mashing that avocado like it’s a piece of playdough? All that gooey, messy fun... 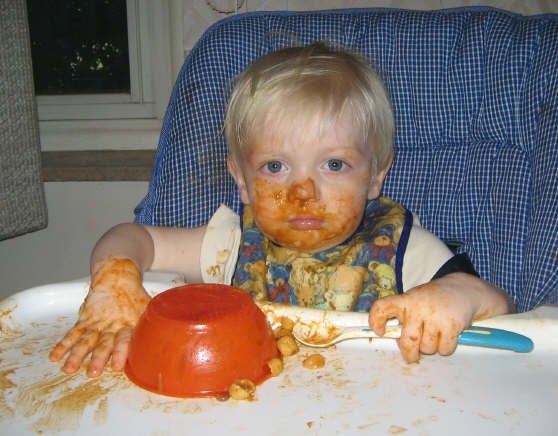 Playing with those sweet potatoes again? Mashing that avocado like it’s a piece of playdough? All that gooey, messy fun could help babies learn words for things that aren’t solid.

Researchers have long known that babies learn language first by naming objects – table, chair, doggie, and so on. They know that by two and a half, babies have developed systems that help them understand new objects by relating them to things they know.

But the same doesn’t hold true with slippery, oozing, non-solid objects. “Babies seem to know about some of the physical properties of non-solids, but they don’t know the names for them,” Larissa Samuelson, associate professor in psychology at the University of Iowa, told KinderLab. At 2.5 years, babies know only 14 words for non-solid objects, and 12 of those 14 words are for food items (the other two are rain and water – a large body of water in this case). The researchers thought that what children really know about non-solids was restricted to a specific context: mealtimes.

Samuelson and her colleagues tested the idea by exposing 16-month-olds to 14 nonsolid objects, mostly food and drinks such as applesauce, pudding, juice, and soup. They presented the items and gave them made-up monikers like wug. A minute later, the kids had to identify the same food in different sizes or shapes. The task required the youngsters to go beyond relying simply on shape and size and to explore what the substances were made of to make the correct identification and word choice. In a paper published in the journal Developmental Science, the researchers found the children seated in a high chair were more apt to identify and name the food than those sitting at a table. Babies in high chairs were also more likely to play with their food and make messes.

The study also shows something that’s known to be true for older kids and adults – it’s easier to take a test when you’re in the same context as when you learned the material. For babies, naming words from their position in a high chair is easier. “For older kids, we know that they should take tests in the same context as they studied,” says Samuelson. “Mealtimes are a different contextual setting, and it’s not one we typically test in the lab.”

Play is an important way to gaining knowledge about the world. “When babies are at home messing with their food, they’re also learning a lot. And when they come into the lab, they can show us what they know about non-solids,” says Samuelson. “Playing at home is a way to learn.”