Riding A Shrinking Comet Toward The Sun 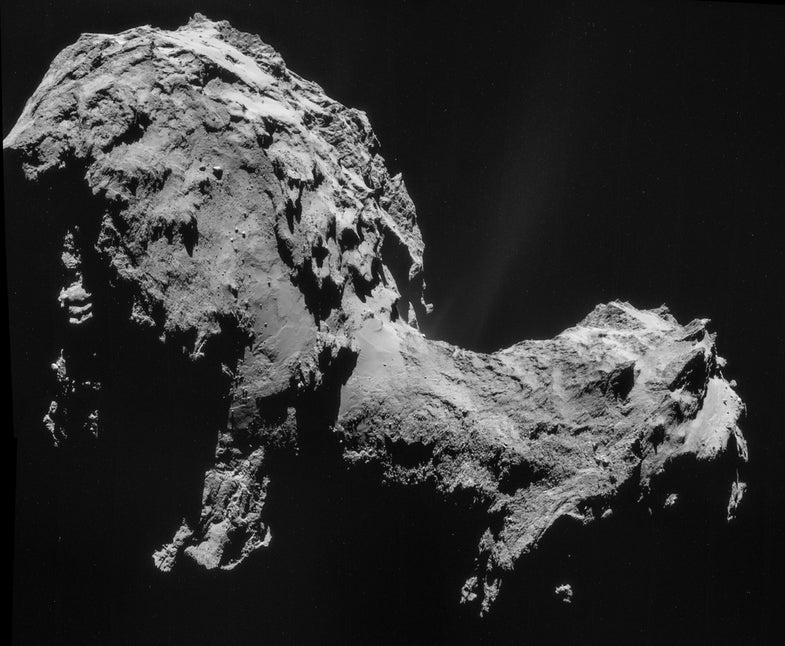 It’s been a good ride for the Rosetta mission.

Since August of last year, the orbiter and lander duo have been tagging along with the duck-shaped comet 67P/Churyumov-Gerasimenko as it circles the Sun, becoming the first spacecraft to orbit and touch down on a comet.

Along the journey, they’ve made a number of discoveries–detecting complex organic molecules, revealing the comet’s porous inner structure, and providing a clearer picture of our solar system when it was young.

And the spacecrafts are just getting warmed up. Literally. On August 14, the mission will reach its climax when the comet speeds into its closest approach to the sun. Though the comet will only come to within about 115 million miles of the sun, temperatures on 67P will reach as high as 86 degrees Fahrenheit, and large chunks of the icy comet will boil off.

What will we see?

We’ll get a new view of Comet 67P. As the comet’s lopsided orbit brings it closer to the sun, it’s going to light up parts of the comet that so far have remained in darkness. The comet will receive about as much solar energy as Sweden or Northern Canada get in the middle of the day, says Rosetta’s project scientist Matt Taylor.

The comet is also becoming more active. It has been constantly losing dust and ice—which is what forms the coma, the cloudy halo that’s always surrounding the comet. With more heat, the ice will vaporize at a higher rate, then jet off and carry dust as it moves, which will create a thicker coma. 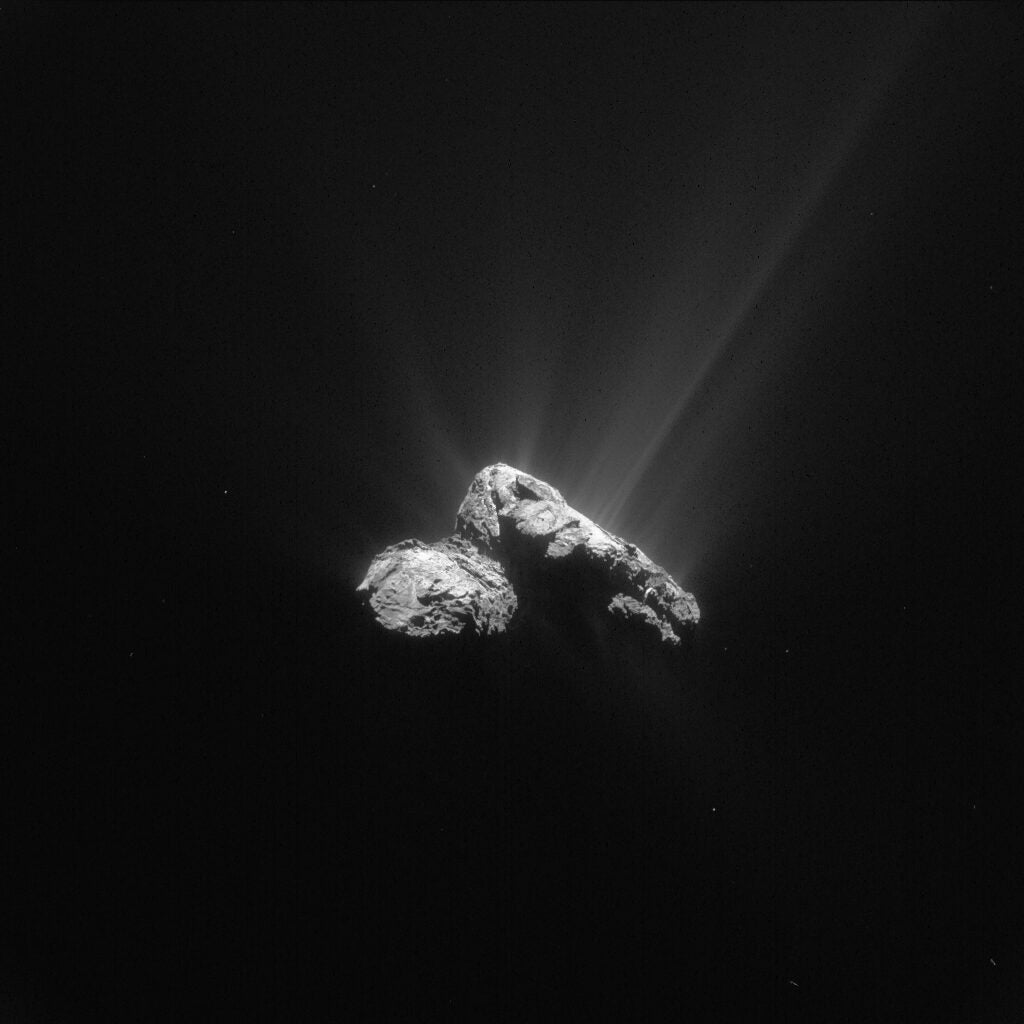 Over the course of the mission, the comet’s surface will lose several meters of material.

What can we learn from the encounter?

Throughout the comet’s approach, the orbiter will continue to snap pictures and measure the composition of the comet’s coma, as well as its mass and volume.

“The measurements we take with the instruments on both Rosetta and Philae aim to understand where a comet comes from and how it works, how that energy input drives the activity,” says Taylor, “which in some cases can be rather explosive.”

Hopefully the activity doesn’t split the comet into two.

Will Rosetta survive the encounter?

The comet’s restlessness started becoming a problem for the orbiter months ago. Like a sailor, Rosetta navigates using the stars, and the comet’s thick clouds of dust aren’t making that easy.

“Imagine you are driving in a blizzard and trying to see the stars in the sky,” says Taylor. “That’s what Rosetta needs to do, as we need accurate star locations to make sure we know the spacecraft’s location and orientation.”

To keep Rosetta safe, the team has had to back away from the comet a bit. Plus, as the jets of gas boiling off the comet become more explosive (and will presumably become more so during perihelion), Rosetta has had to retreat even further lately, to a distance of about 200 miles.

Series of images shows part of the comet before (left), during (middle), and after (right) it releases a jet of gas.

Although the environment is harsher than scientists expected, Taylor says that the spacecraft should be safe as long as it keeps away from the densest part of the coma.

Could Philae come back to life?

Poor Philae. The lander was supposed to become the first spacecraft to touch down softly on a comet, but instead it bounced three times before crashing in the shadow of a crater rim, which left its solar panels starving for energy.

Philae is still alive, but Rosetta hasn’t been able to establish stable communications with it.

Might all those jets of water vapor and dust clear whatever obstruction might be blocking the lander’s antenna?

Taylor says that although the comet’s surface is likely to change, it’s hard to tell whether those changes will happen near the region where Philae is hiding. “We will still continue to listen out for the lander,” he says.

What’s the team doing to prepare for perihelion?

“We are doing the same as we do most of the time,” says Taylor. “We ride along and observe changes. Basically, its business as usual– making sure we carry out the observations, but also keeping the spacecraft safe… But we are expecting a good show from the comet.”

What happens after perihelion?

The goal of the mission is to observe the comet before, during, and after its closest approach to the sun. So Rosetta will be continuing its journey until September 2016, to get a full picture of the comet’s cycle of activity. Then, the team will move the spacecraft closer and closer to the comet until it eventually collides with the surface.

“This will provide us with the highest resolution images and data possible,” Taylor says, joking: “Also, it will mean we landed four times on the comet.”